Tonight we are wrapping up the last of our Open Houses. We’ve had such a fun time meeting everyone and were consistently impressed with all the new talent! Here is some more information on our practice schedule.

You are by no means obligated to come to every practice or stay for the duration, just come when you can and stay as long as you’d like. Our first day of regular practices is Tuesday Sept. 20th. If you have any other questions, please feel free to shoot us a message at bufencers@gmail.com!

Thanks and we’ll see you all soon,
Marie-Elle and the E-Board

Hey terriers, we hope you’re all having a lovely summer and getting excited for the 2016 Olympic games! Starting in just over a month, they bring with them unfathomable patriotism and the opportunity to finally watch our favorite sport on a major network channel. Throughout the summer, we’ll be posting updates about the US team and their successes as well as our own super-star fencers, so stay tuned!

This year’s US team brings a variety of fencers old and new to the games, including Mariel Zagunis, Ibtihaj Muhammad and an all-star men’s foil team. Check everyone out and let us know who you can’t wait to watch compete! http://www.teamusa.org/News/2016/April/28/Meet-The-2016-US-Olympic-Fencing-Team

This past weekend, Nationals was held at Bensalem High School in Bucks County. We survived the bus ride and waking up before dawn. 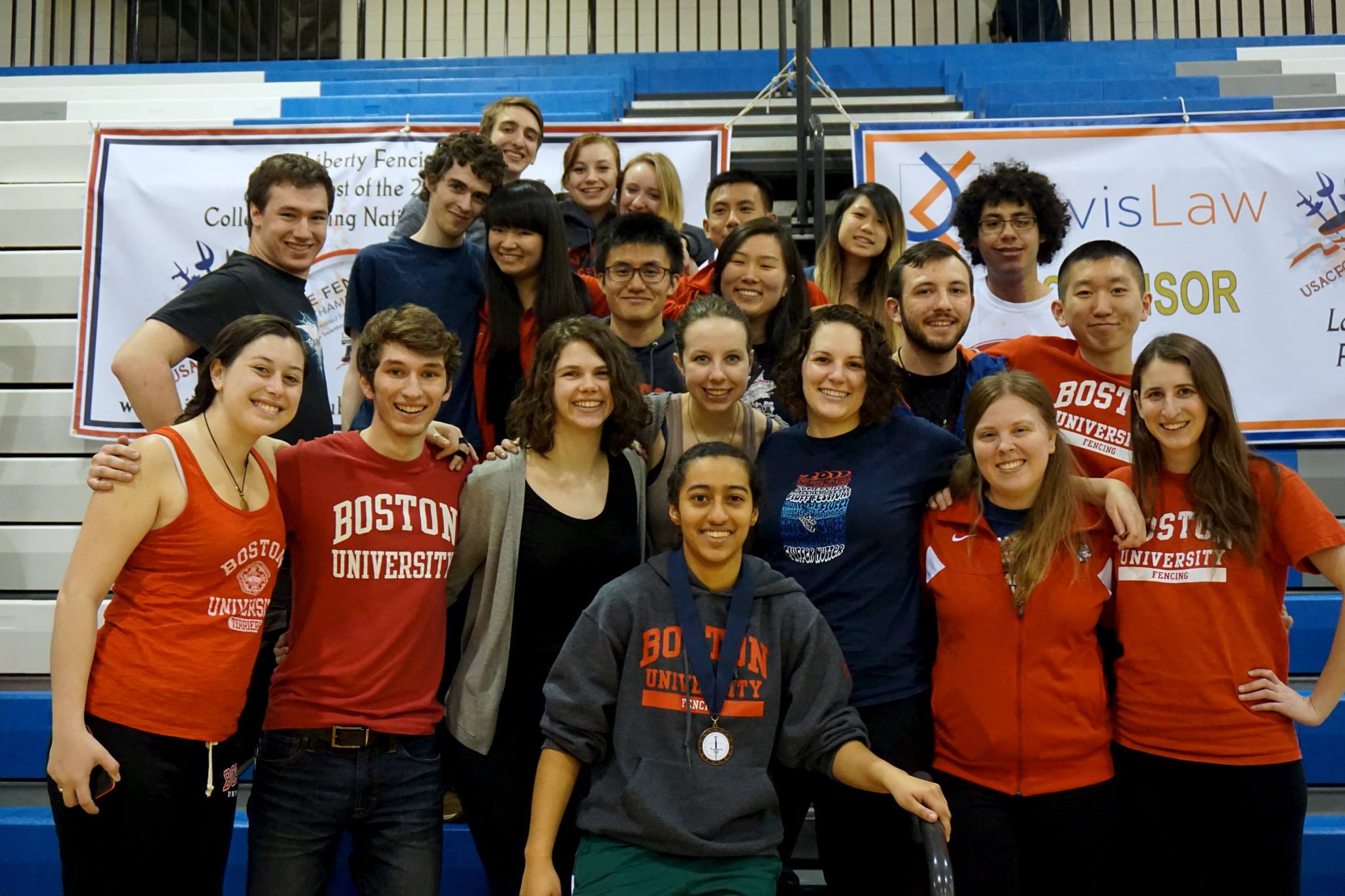 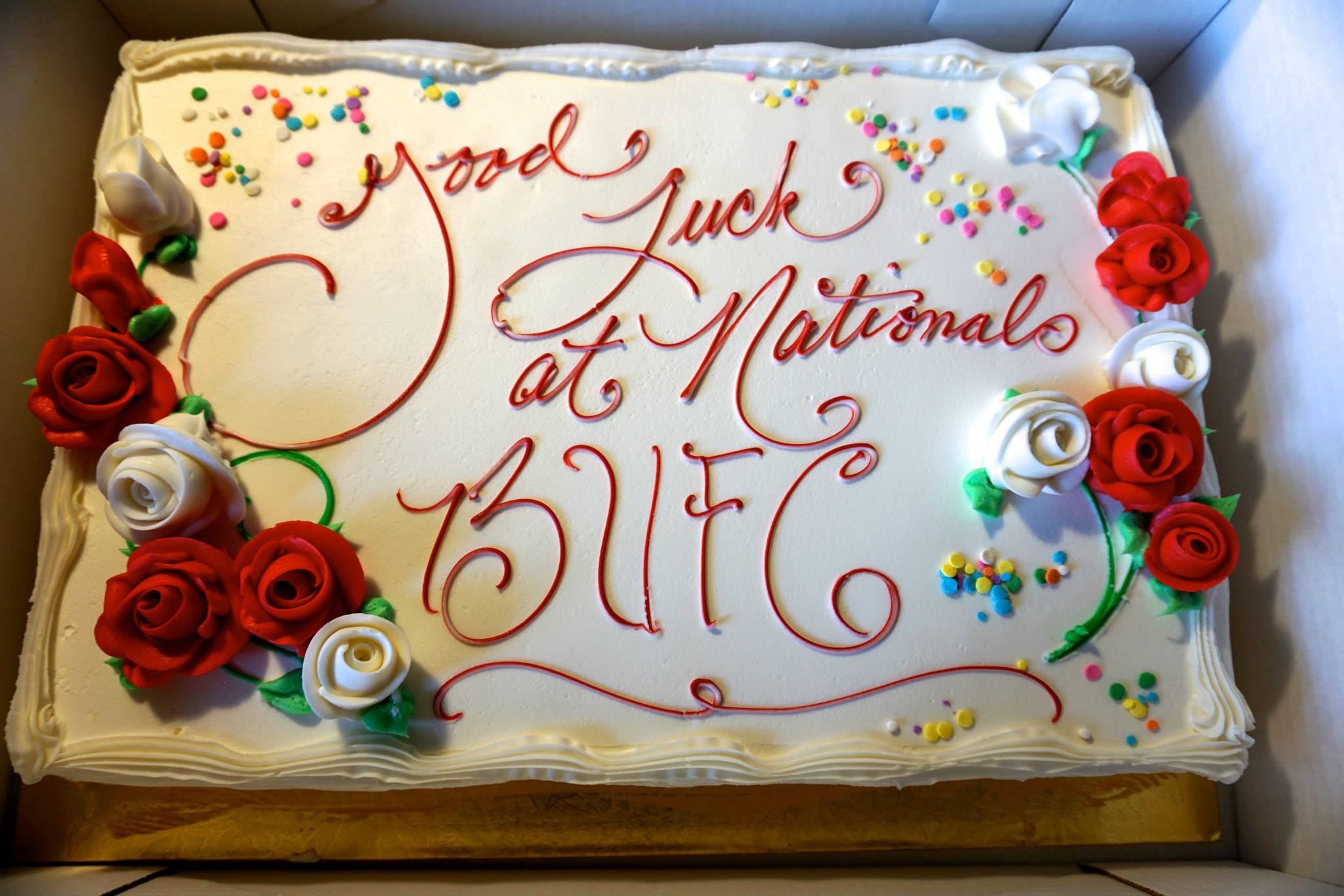 We also had surprise visits from a couple of our alumni, Kelly M. (’14) and Rachel P. (’14)! Not to mention, family and friends all came to support as well. Thank you for supporting us, whether you could make it or not!

Overall, it was a very rewarding weekend bonding over fencing (of course), Friendly’s, and cake!

Last weekend, BUFC took on The Big One at Smith College! It’s our first competition of the year and needless to say, we’re proud of all of them!

Congratulations to Nagisa Ogata for getting gold in women’s foil!!

Highlights of the tournament:

If you’re curious, full results can be found below:
http://www.prisedefer.com/results/Tournaments/2014BigOne/index.htm

We’re proud of all of you!! Thank you to those who have been encouraging and supportive of our fencers.

Hi everyone! Hope your summer has been well. This is a super belated post, but for anyone who missed out on the results for Nationals in Knoxville, TN this year, below are the results!

Regardless of the results, everyone has worked very hard and bonded over 18-hour bus rides. Looking forward to great results in the upcoming fall as well.

Last Saturday in the wee hours of the morning, 37 awesome members of BUFC shipped off to Smith for the 2013 NEIFC Fall Invitational – better known as The Big One.

Looks like all of our training is paying off – we had 10 fencers place in the top 32 for their event! Special shout out to Kelly Miller for her 5th place finish in Women’s Saber and Maja Capek for 11th in Women’s Foil (at her first ever Big One!). We had a fantastic time and are even more excited (if that is even possible) for the rest of the season.

You can check out the Big One results here: http://www.prisedefer.com/LiveResults/

Next stop – Brown University for NFC #1 on Saturday, November 16th!

Eight years ago, this November, my mother brought to me during breakfast an interesting article about fencing and it’s growing popularity in New Jersey. Like most 14 year olds, the only thing that had interest to me about this sport was sword fighting and being a three musketeer…and that was basically it. A sport that is mainly one on one and not really team based was not too interesting to me, as someone who played recreational soccer for most of his life. I quickly learned that my high school was having open tryouts for a fencing team, which was about to enter its first season. Why not, I told myself and after a week of using muscles whose pain I had never experienced in my life, I was a part of the Junior Varsity Fencing Team, fencing foil, at West Windsor-Plainsboro High School North. The rest, as they say, is history.

Four years later, when deciding on college, I did a search on the four schools I had to decide on if fencing was offered. While at first I would have never put fencing into consideration for college, the more I thought about it, how could I just forget about a sport that I fell in love during four years of high school? The results: two had varsity teams, one had no team, and one had a very interesting website. That interesting website, one that discussed some strange game called “Glove Game,” was one of the final parts of my decision making process and before I knew it, I was shipping up to Boston.

With over eight years of fencing, I’ve held many titles: Junior Varsity C-Strip, Varsity B-Strip, and Men’s Foil Captain in High School; Men’s Foil Captain, Treasurer and finally President in college. In all those years, no title meant more to me than to be simply a teammate and this of course could not be truer than during my time with the Boston University Fencing Club. This club…there are simply too many words to describe it. Since that first day practice in September 2009 to this last week of practice in May 2013, I’ve seen the growth of (and I quote the words of a USACFC official) “one of the most well respected fencing clubs in the nation.” Hearing these words, while the President of this wonderful team, was my motivation for what has been the most successful year our club has ever been through, with of course Nationals and the 1st ever Alumni Tournament being the two highlights. The experiences we’ve had through these four years, during practice, tournaments or any other social activity, are so varied and wonderful that I’d be hard pressed to put them all in writing. Every senior graduating, I’m sure, can agree with me that we’ll miss this huge family we’re brought up during our unfortunately short four years as a part of the BUFC.

This team has given me so much that it will be impossible to give back equally as much, especially the best and lifelong friends I have made. While come graduation I will be leaving this great city, I want each and every member of the BUFC to know that there is no way in hell I will forget about you. I plan on making many trips up to Boston, so while I won’t be a “permanent fixture” in the Three Court gym, the Multipurpose Rooms or the Cage anymore, or my StuVi 1 apartment, you haven’t seen the last of me.

Stay classy and keep me proud, both on and off the strip.

Well, with Nationals behind us and a successful 1st Annual Alumni Tournament, our season is officially over. While practices will be much more laid back from now until the end of the semester, we still look forward to another exciting season as it will be quickly approaching. With that said, we now have a new e-board for next school year, which consists of:

From one President to the newly elected e-board, I wish you all the best of luck next season. I’ll be sure to post my “final love letter” to this team as graduation draws near. Until then, thanks for stopping by!

We wanted to update everybody about some more exciting news: out 1st Alumni Tournament has been scheduled for April 20th, 2013! Alumni, if you are interested in attending this event, which will take place at Boston University’s Fitness and Recreation Center, please email us at bufence@bu.edu.

Looking forward to hearing from many of you and what should prove to be an awesome event!

We hope that everyone is off to a great start in this new semester. We have just completed the winter edition of our newsletter. Be sure to take a look!