Hello, everyone. I’m here to talk about how acting has helped me grow as a person. I don’t think I am a very good actor (I mean, I don’t think I’m too bad, either), but it has been a very big part of my college experience, and it has genuinely helped me with my anxiety. 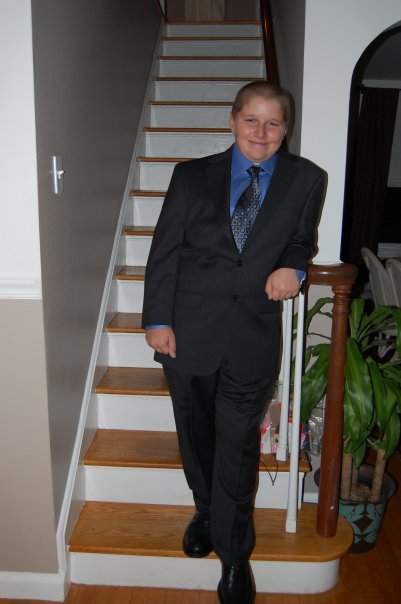 This is me circa 2009. I was a pretty shy kid. For a while, I had dealt with anxiety (and I didn’t know it until recently (oops)). Since realizing what it was and talking to my doctor about it, I began to try things to combat it. One of the things was acting.

I took an acting class my sophomore year of high school. It was scary. I was the oldest in the class, so I at least had some sense of seniority, but I was still afraid to let go. I was uncomfortable in my appearance, and I didn’t want people to think less of me if I did things that weren’t “cool.”

Thanks to (second) puberty, and some attention to my diet, I am more confident in my appearance. Luckily, this coincided with a time during which my friends and I began messing around with making short films.

My friends would often come up with stories to tell, and they would prefer to be behind the camera. This frequently left me in front of the camera and on screen. I quickly became comfortable with it, and I ended up getting pretty into it. I was enrolled in the College of General Studies when I first got to BU. Through this, I looked into extracurriculars to get more involved with film and television. One of the outlets I found was assignments in my friends’ classes.

This was one of the Production 1 films. It’s a silent film, but we were able to come up with idea, shoot it, and edit it all within two hours.

During my junior year, two friends and I started a Youtube Channel named COB. We assumed different roles for the channel, and I took on the roles of acting and producing. We set out to make short comedic videos on a weekly basis. Most of the time, we aimed to be absurd as possible while still hitting a bigger audience. Given the content, I often needed to act outside of my comfort zone.

This is our Halloween episode from last year.

I, along with some friends, wanted to make a video with a larger production than usual one summer. We came up with a story, launched a Kickstarter that earned $15,000, and flew down to South Florida to shoot the film.

Due to some unexpected obstacles, I ended up stepping in to play the main character in the film.

This past semester, I auditioned and was cast in the musical Legally Blonde on campus. I was given the role of Kyle, the UPS Delivery Man. This required me to wear short shorts and dance on stage… in front of about 500 people for three different nights. This was objectively the hardest acting I’ve done not because the role demanded too much but because I could see my audience. I was used to having as many takes on camera as I needed, but I only got one chance each night to get everything right – and I could see the people judging that. I may or may not have blacked out every time I went on stage, but I can honestly say that it was one of the most incredible comfort-zone-shattering experiences in my life.

As an anxious and shy person, I didn’t have very many refined social skills. I found that I tended to stay well within my comfort zone, and this didn’t help me grow. When I began to realize this, I took steps to break out of that funk, and one of the most helpful ones was acting. Sometimes acting like a doofus helps you become more comfortable being yourself in front of others.