Over the last week, my improvisational comedy troupe, Liquid Fun, has been touring Chicago’s vast comedy scene. At Boston University, the comedy community welcomed me under its wings during the first few months. Since then, it has been the core of my social and academic experience. It always surprises me how many of us are in the College of Communications. Many of us, like myself, are Film and Television majors. I believe this is because comedy, specifically improv, crosses over with the television degree to a large extent. 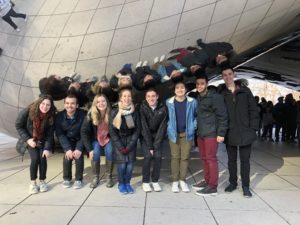 In Chicago, we frequently attended shows at Improv Olympic, known around town as iO.

Here, we saw the best of the best in terms of on-your-feet creativity and humor. It was very inspiring to see how successful people got at such a weird art form. I love improv, but it is extremely odd. I would not consider myself a great screenwriter, but improv helps a lot. For me, coming up with a script premise is extremely hard. However, I create about 10 scenes every time I have practice. So, it does push your creative side and forces you to form full story arcs within a short period of time.

Most of the players in these shows were pursuing acting, writing, and other careers related to film. I am thankful for the close relationship between TV, film, and comedy. I feel like, being in the comedy community, I also have a community of people within the TV/Film world that I can depend on in the future, either as friends or colleagues.

I will now gush about improv. Only having done it a year, I can feel that my personality has changed drastically, and for the better. Improv allows you to shed any hesitation you might have, and to go forward no matter what. This is extremely important when it comes to the entertainment business. When you are confronted with a situation that needs to be dealt with, it’s important to be able to stay calm, and to improvise. Because, and this is the truth (maybe not, I’m young, who knows), no one really knows exactly what they’re doing. So, being able to make do with whatever is in front of you is crucial in order to progress.

Aside from the business talk, I really do love improv. It is an amazing “sport”/”art” that is open to anyone who wants to try. In Chicago, there were events every night for the public. I have never laughed so hard, so many days in a row. That is why being in the comedy community is so integral to my life here at BU. I could not imagine not laughing as much as I do. When life is getting kind of rough, say, during finals week, you can depend on practice to lighten your day. No matter what is weighing you down, when you are doing improv, you let it I am utterly thankful for the friends I have made, and I cannot recommend these clubs enough for people coming to BU.

If you are coming to BU, or if you have already been at BU, and you have any inkling to do any sort of comedy, PLEASE DO! It is the best decision I have made here, and it will definitely continue on into my career. You will grow lifelong skills and values, and you will make friends that will challenge your wit and creativity. In COM, you will be surrounded by people who are involved in many of the groups on campus. The two work beautifully hand in hand, and it will serve you well as you progress in this track!