Hello all you film buffs! This week, I thought I would recommend some of my favorite movies that have been shot in Boston. There are many more that don’t appear on this list, but I think these movies incorporate some great aspects of the spirit of the city and our local history. 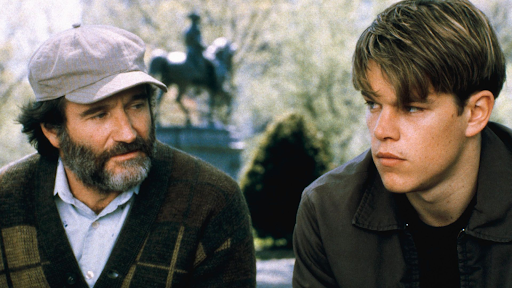 Focused on an integral aspect of Boston history, the Academy Award winning Spotlight explores the 2001 Boston Globe investigation into child sex abuse commited by local Roman Catholic priests. The film took home the Best Picture award at the 2016 Academy Awards, and is a favorite within the BU community due to its connections to our school! Two of the journalists portrayed in the movie, Sacha Pfeiffer and Mike Rezendes, are BU alumni! While most of the production took place in Toronto, some key scenes were filmed in our city. Fenway Park, the Boston Public Library, the JFK/UMass T stop, Boston College High School, and the old Boston Globe offices all make an appearance.

The Social Network tells the story of a young Mark Zuckerburg as he first creates Facebook and then follows him through the many successes, failures, and legal disputes that followed. Much of this movie takes place at Harvard and MIT, and so much of it was shot around Boston (and BU). A famous rowing scene was actually partly shot inside a BU COM production studio in West Campus, and later it was digitally manipulated to look like it was shot outside. There were even some interior shots at BU’s Wheelock College of Education and Human Development. With Facebook back in the news again now, check out this interesting film well-known for its score and performances!

Perhaps the most famous Boston movie of all time, Ben Affleck and Matt Damon’s Good Will Hunting tells the story of an MIT janitor who is secretly a genius, and gets help from a professor and a therapist to reach his full potential. This film is shot all over Boston, including at MIT, in Harvard Square, in the Public Gardens. It was also written by two of Boston’s most well-known actors. Definitely choose this classic if you want to celebrate the spirit of Boston!