As a college student, I’m always looking for ways to save money. One thing I almost never did in high school that has become a staple for me at BU is thrifting! Thrifting is awesome because it’s cheap and you can get some really awesome, one-of-a-kind pieces from thrift stores. There are some super cool and trendy thrift stores close to the BU campus, so I thought I’d share some of my favorites with you.

1. Urban Renewals: This place is awesome!! They have anything you could ever want, with endless rows of every single article of clothing possible. It’s organized by color, which is super helpful and makes the process a lot easier! Located at 122 Brighton Ave, Boston, MA. 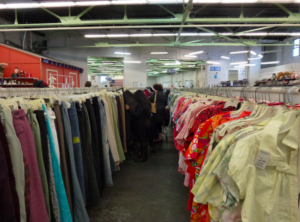 2. Buffalo Exchange: Buffalo Exchange is a bit more pricey than Urban Renewals, but it still has some great options. The choices here are very trendy, and they have everything from clothing to jewelry to shoes to random stuff like pins and notebooks! Located at 180 Harvard Ave, Boston, MA. 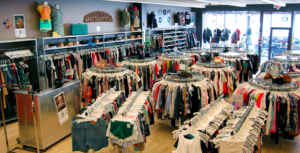 3. Goodwill: Goodwill is a great option as it is right here, near the west side of BU’s campus. The store itself is massive, with options ranging from 80s prom gowns to Hawaiian shirts. If you ever need a very specific piece of clothing for an event, this is the place to go to! Located at 965 Commonwealth Avenue, Boston, MA. 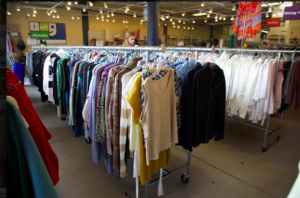 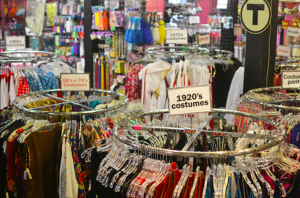 New England is an amazing place, in part because of its seasons. There are few other places where you can get a real four-season year like you can in the northeast. But, with short days, cold winds, and huge amounts of snow, the winter season can seem long and unbearable to some.

However, a cheery fire and a steaming mug of hot chocolate can make all the difference in combating these mid-winter blues. So, with the toughest season of the year just beginning to show its signs, I’m going to have a go at listing the top five ways to get a break from the Boston winter.

1) Cozy up in a Coffee Shop. It may seem a bit obvious, but bringing a good book and some free time to a toasty coffee shop and relaxing is a great way to make the winter a little brighter. Between the wafting smells of freshly baked pastries, and the comfortable, low key atmosphere, your winter blues will float away like the steam coming off your mocha-soy latte. An on-campus favorite is the Espresso Royale Café –for a filling breakfast try their bagel sandwiches!

2) Catch a Flick. Boston doesn’t have the most theaters per capita, but it does have some of the nicest art house and independent venues I’ve been to. Spending a dark winter afternoon or evening in the supple ambience of an art deco theater can be a great way to brighten your week. The local Brattle Theater (Cambridge) and Coolidge Corner Theater (Brookline) are both accessible by public transit, and frequently screen old favorites, new indie pictures, foreign gems, and even a cartoon marathon from time to time.

3) Go Shopping. I’m sure I’m not the only one among us who suffers from a minor-to-severe case of retail therapy. While I might take out my stress by making questionable purchases (I don’t care what my roommate says – that $200 Japanese tea set was TOTALLY necessary), I’m actually recommending some light mall-crawling because of the locations rather than the stores. The Prudential Center, a popular shopping mall in the Back Bay, is brilliant in the winter, decked out from floor to ceiling in shiny holiday cheer. The Galleria Mall in Cambridge is similarly resplendent during the holiday season. Sometimes during the winter, a healthy dose of bright lights, shiny ornaments, and old fashioned consumerism is just what the doctor ordered.

4) Get to the Gym. I might be sounding like a broken record, but I can’t recommend exercise enough. Getting your heart rate up is clinically proven to elevate mood and help you stay positive and upbeat. Long winters can take quite a toll even on the most hardened of lifetime New Englanders. Some daily exercise is a great way to make those grey skies seem a little bit brighter. For those who have a phobia of exercise machines (“I’ve only been running for HOW long!?”), the FitRec offers classes, rock climbing and pick up sports, all fun ways to stay active without the repetitiveness of working out.

5) Embrace the Cold. It may sound funny at first, but sometimes the best way to beat the winter is throw the reigns over it and turn it into your own personal joyride. From sledding, skating and skiing, to getting in a free-fire snowball fight on Bay State road, the red noses and frozen fingertips can help you find the winter as a source of fun, rather than dreariness. Getting good and drenched in melted snow makes the hot chocolate that much more satisfying as well. Local mass transit means woods and sledding areas out of the city are just a train ride away – just be sure to bundle up!

If you haven’t experienced a New England winter before, you’re in for an extraordinary few months. Tackle it head on, stay on top of your work, and try to have some fun! Winter cheer really does exist, and like the blizzards and snow banks, it can be found in New England like no other place.

Until next time, stay warm and dry!