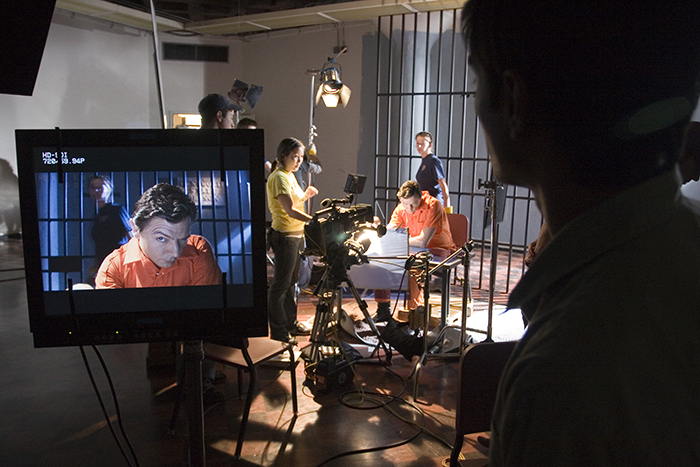 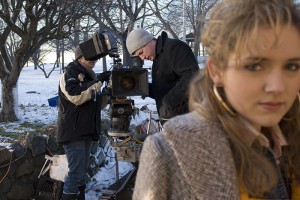 On various Fridays throughout the semester, BU’s Film and Television department at the College of Communication hosts free premier screenings of innovative film and television programs. This screening series is part of the department’s Cinemathèque: meetings and conversations with filmmakers/television-makers. The series’ curator is Gerald Peary, a cinema professor at Suffolk University and a long-time film critic for the Boston Phoenix. He chooses his BU programs based on his extensive contacts in the professional film world and from his travels to film festivals around the globe.

For each featured production, a special guest  (the producer, filmmaker, etc.) is invited to COM for the screening. During the screening, film students quickly escort the filmmaker to a brief interview shoot.  Afterwards, a Q&A is held to provide more information to the audience regarding the production process.

However, it wasn’t until after this year’s first screening that the After this year’s first screening, the Cinemathèque team decided they wanted to shoot interviews with the featured guests. Clearly, figuring out the production technicalities for these interviews would not be an issue, but what they did need was someone who could ask the right questions.

Without much thought, fingers pointed in the direction of third semester Broadcast Journalism graduate student, Alistair Birrell. “I thought it would be a good way to hone my interviewing skills,” he said.

On Friday, October 24, Birrell interviewed filmmaker Frank V. Ross, during the screening of his film, Tiger Tail in Blue. This was Birrell’s second interview of the semester for Cinemathèque.

With only a fifteen minute window, Birrell must make sure he steers the interview in the correct way. “Where are you from?” Ross asked Birrell during the interview. “I’m from Scotland, but we can talk about me later,” Birrell quickly responded.

After each interview, students on the production team edit the video down to around three or four minutes. All interviews are featured on the Cinemathèque page, so be sure to check out Alistair’s full interview with Ross.

Overall, this program is an excellent example of COM’s Film and Television department preparing its students with hands-on, practical experience for the ever so competitive entertainment industry. These are lessons no textbook can teach, yet something every student should experience.

Take a look at the 2014 Cinemathèque schedule here to see what will be screening over the next few weeks. Although these screenings are designed to primarily  benefit  Film and TV students, they are free for all BU students and professors as well as the general public.

Interested in applying to one of the graduate programs at BU’s College of Communication? Tell us which one and why in the comments below.

To find out more about all of the graduate programs available through COM, be sure to check out our website here.

At Boston University’s College of Communication (COM), the beginning of a new semester also means the start to another year filled with exciting events for faculty and staff. Yes, it is important to get your schedule right and books bought, but it’s also important you are made aware of the once-a-year, beneficial networking events happening right now.

This Thursday, September 18th at 5:30 p.m., the College of Communication (COM) is hosting the 2014 Distinguished Alumni Awards at the School of Management. The event, which is free and open to the public, will honor some of COM’s most accomplished alumni. Previous alumni recipients who have attended the event include: – Co-Host of Market Place Morning Report and American Public Media, Jeremy C. Hobson (‘04) – White House Photographer, Peter J. Souza (’76), – Bravo’s Executive Vice President of Development & Talent, Andy Cohen (’90). The list goes on. If you have time, check it out here.

This year, you may even be lucky enough to meet the BU COM alum who is making more than just movies, but medical history too. One of the four COM alums being honored at this year’s Distinguished Alumni Awards is filmmaker Will Lautzenheiser (CAS’96, COM’07),  who lost both his arms and legs to a deadly bacteria, three years ago.

Lautzenheiser completed his undergraduate studies at BU’s College of Arts and Sciences. Eventually, in 2005, he made the decision to return to BU for graduate school at the College of Communication. Lautzenheiser extended his stay at BU when he became a lecturer at COM in the fall of 2007. During this time, he produced and directed the short film Just Like It Was, which won a CINE Golden Eagle Award.

In the spring of 2011, Lautzenheiser left BU for a teaching job at Montana State University in Bozeman, Montana. Ten days after his move, Lautzenheiser’s fight for his life began. While doctors struggled to diagnose Lautzenheiser, his organs began to shut down. Eventually, he was diagnosed with streptococcal toxic shock syndrome,  a bacteria that causes vital organs to shut down and infection that quickly kills muscle, skin, and underlying tissue. Lautzenheiser underwent 16 surgeries that removed both of his arms and legs.

This past June, doctors at Brigham and Women’s Hospital (BWH) approved Lautzenheiser for a bilateral arm transplant, a procedure that has been performed only a few times in the United States.

Lautzenheiser just completed writing and starring in the short-documentary, Stumped. Directed by Robin Berghaus, the film is about Lautzenheiser’s survival and rehabilitation as a quadrilateral amputee. It has been shown at multiple film festivals across the country and has received multiple awards, including “Best of the Fest” for audience’s favorite documentary at the Palm Springs International ShortFest. On November 6th, Emerson College will be airing Stumped at their Bright Light Series, as well as hosting a comedy set and Q&A with Lautzenheiser.

To learn more about Lautzenheiser’s story before seeing him on Thursday at BU COM’s Distinguished Alumni Event, check out these videos by BU Today producers Joe Chan and Robin Berghaus.

If you would like to make a donation to help Will on his road to recovery, please visit the Will Lautzenheiser Fund.