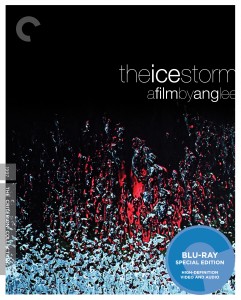 In the 1990s, there seemed to be something in the air about the suburbs and small towns of America.  Many novelists, filmmakers, and photographers focused their attention on the darker side of the cookie-cutter landscapes, examining the homogeneity and boredom of it all.  This took shape in everything from Tim Burton’s outcast in Edward Scissorhands, Gregory Crewdson’s mysterious photographs of western Massachusetts, Tom Perotta’s darkly funny Election and Little Children, and many other visions of sprawl and ennui.  Of course, this was not new, but something gelled in those years.  Some may say that the crowing achievement came in 1999 with Sam Mendes’ American Beauty, which went on to gather up plenty of awards statues and critical accolades, but that film has not aged nearly as well as one that came a few years earlier.  The Ice Storm, Ang Lee’s quieter, tender masterpiece of American life, was released in the fall of 1997 and remains one of the best depictions of the suburbs ever committed to film.  And now we have a beautiful bluray release from the Criterion Collection to help us remember. END_OF_DOCUMENT_TOKEN_TO_BE_REPLACED