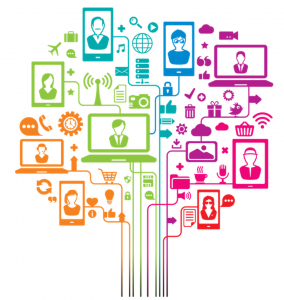 The graduate students of Boston University’s Division of Emerging Media Studies will be holding their inaugural Conference on Emerging Media. Emerging media platforms permeate almost every aspect of our lives including work, learning, public engagement, governance, human development, and community interaction. The implicationsfor how these advancing technologies will both augment and challenge our lives are enormous – yet the study of this field is still in its infancy. This conference will explore the fascinating dimensions of the unique (and still evolving) phenomena of individual and collective experiences with emerging media platforms. The conference is free of charge to both presenters and attendees. This conference is aimed at graduate students to showcase their research and as an opportunity to network with peers. 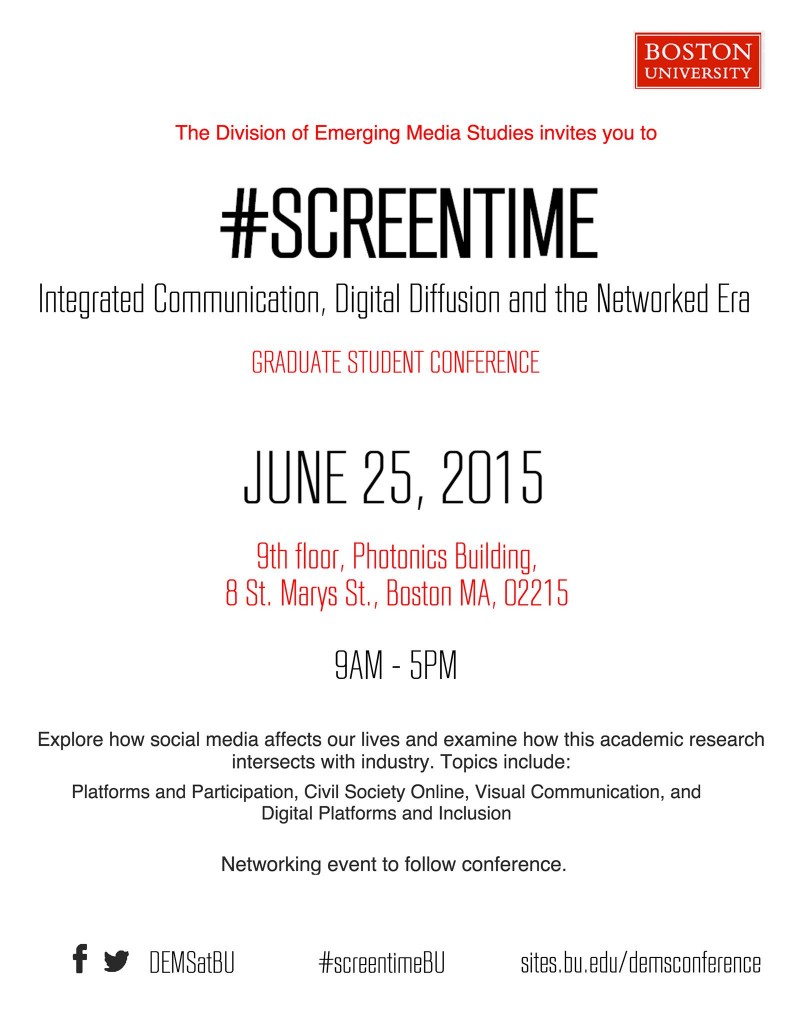 Dr. Lev Manovich (Professor at The Graduate Center, City University of New York, and founder and director of Software Studies Initiative) presented the Spring 2015 Distinguished Lecture. What can we learn about societies from analyzing billions of photographs and videos shared on social networking sites? How can analysis of big data focus on the variability and differences as opposed to the aggregation of data? Can we use interactive visualization to explore massive visual data sets without using numbers or predefined research questions? 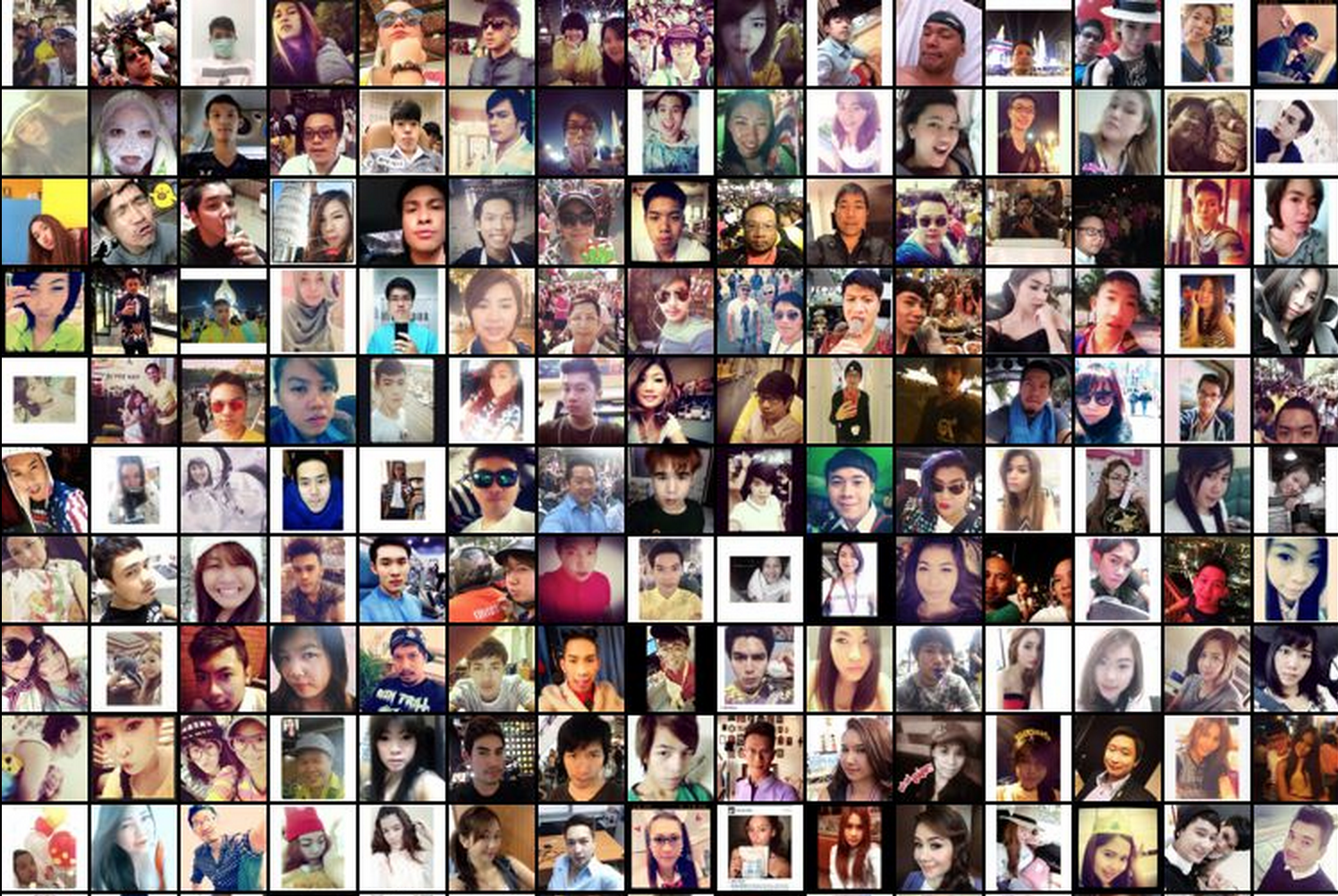 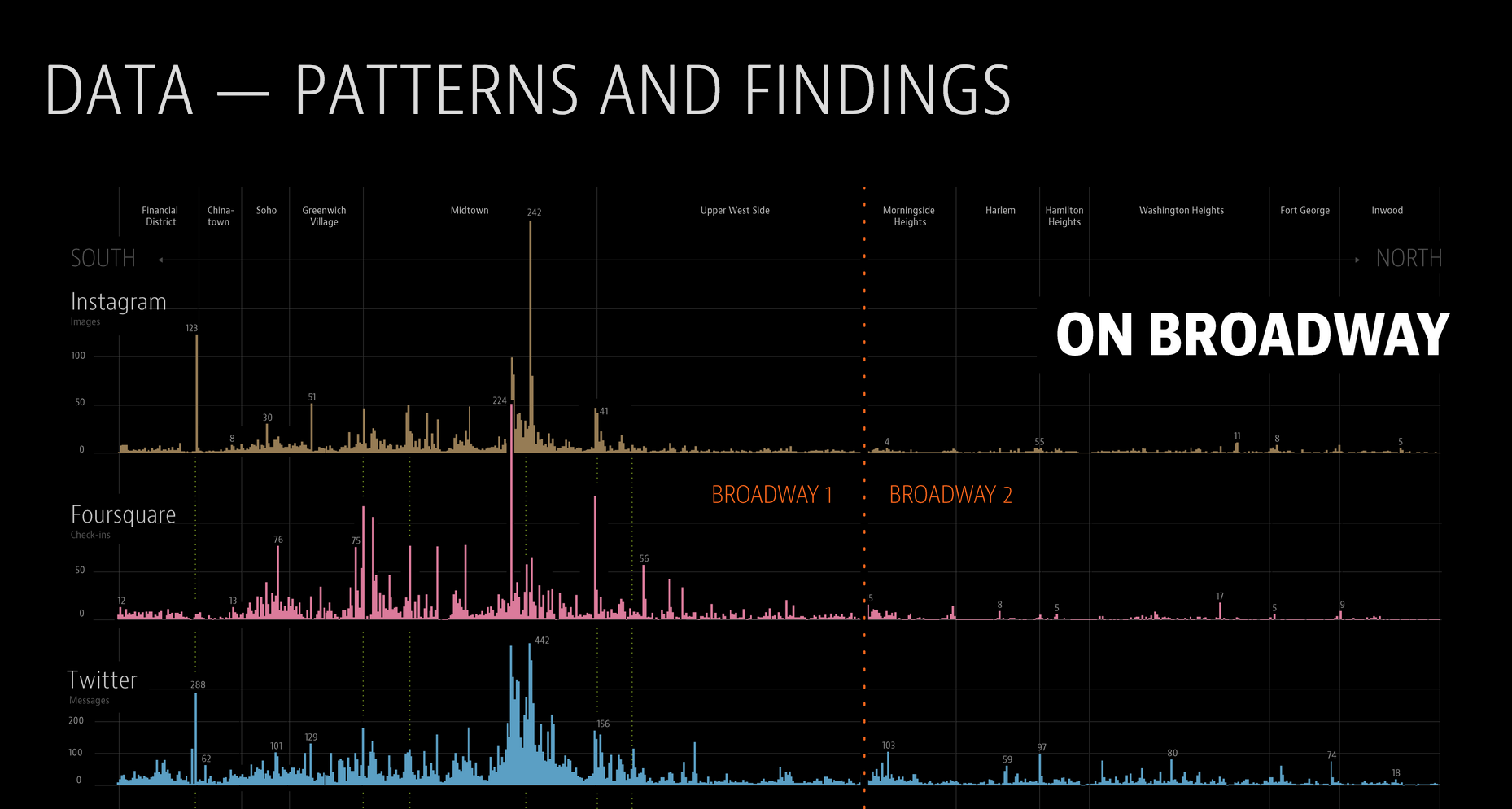 In this presentation, Dr. Manovich discussed these questions using examples of recent projects in his lab where he analyzed 2.3 million Instagram photos from 13 global cities (http://phototrails.net), compared selfies (http://selfiecity.net/), and created an interactive visualization of a city life that does not use any maps (on-broadway.nyc).

ON BROADWAY from Moritz Stefaner on Vimeo.

For more information, you can follow Dr. Manovich at: https://twitter.com/manovich.

Although social media have demonstrated their critical role in electoral politics and many other domains including disseminating political news and information, they have not yet been effectively deployed in helping set national policy. New social media platforms could potentially expand the quality and level of public support in areas such as law enforcement, health, education, and public diplomacy.  This expert workshop was designed to bring leading thinkers in the field together to discuss what is known and what we still need to know about the role that social media can and should play in national policy-setting.

Boston University College of Communication (COM) hosted the 17th annual Power of Narrative Conference, gathering narrative journalism’s most accomplished practitioners to share the latest and best practices with an audience of fellow professionals. As storytelling journalism continues to go digital, The Power of Narrative believes in helping narrative journalists strengthen their craft skills, puzzle out the complex ethics of intimate journalism, and impart the down-to-earth humanity that is the genre’s strength.

March Colloquium: “Censorship we all abhor, but…”: Viewer Complaints and the Demand for Government Intervention in Early TV Content — March 19, 2015

Many stakeholders traveled the road leading to the 1952 Television Code—the industry’s self-censorship document—but none was more powerless than the television audience. Having no investment in the TV industry, viewers were equipped with two resources: their purchasing power and their citizenship. Activating that citizenship, angry viewers flooded the Federal Communications Commission with letters of complaint, decrying the abundance of murder, mayhem, and nude women on TV.

Dr. Deborah Jaramillo examines the perspectives of viewers who chafed at trends incompatible with their understanding of what television should be. By subscribing to a very specific definition of decency—one rife with sexism and heteronormativity—and by openly pleading with the government to censor television, these viewers inserted themselves into the fight over early television regulation.

The Power of Message Networks: A big-data analysis of media effects in Twittersphere during the 2012 U.S. presidential election — February 5, 2015

Do traditional news media still lead public opinion in this digital age? Scholars have questioned the applicability of media effects models such as agenda setting in this complex, fragmented media landscape. 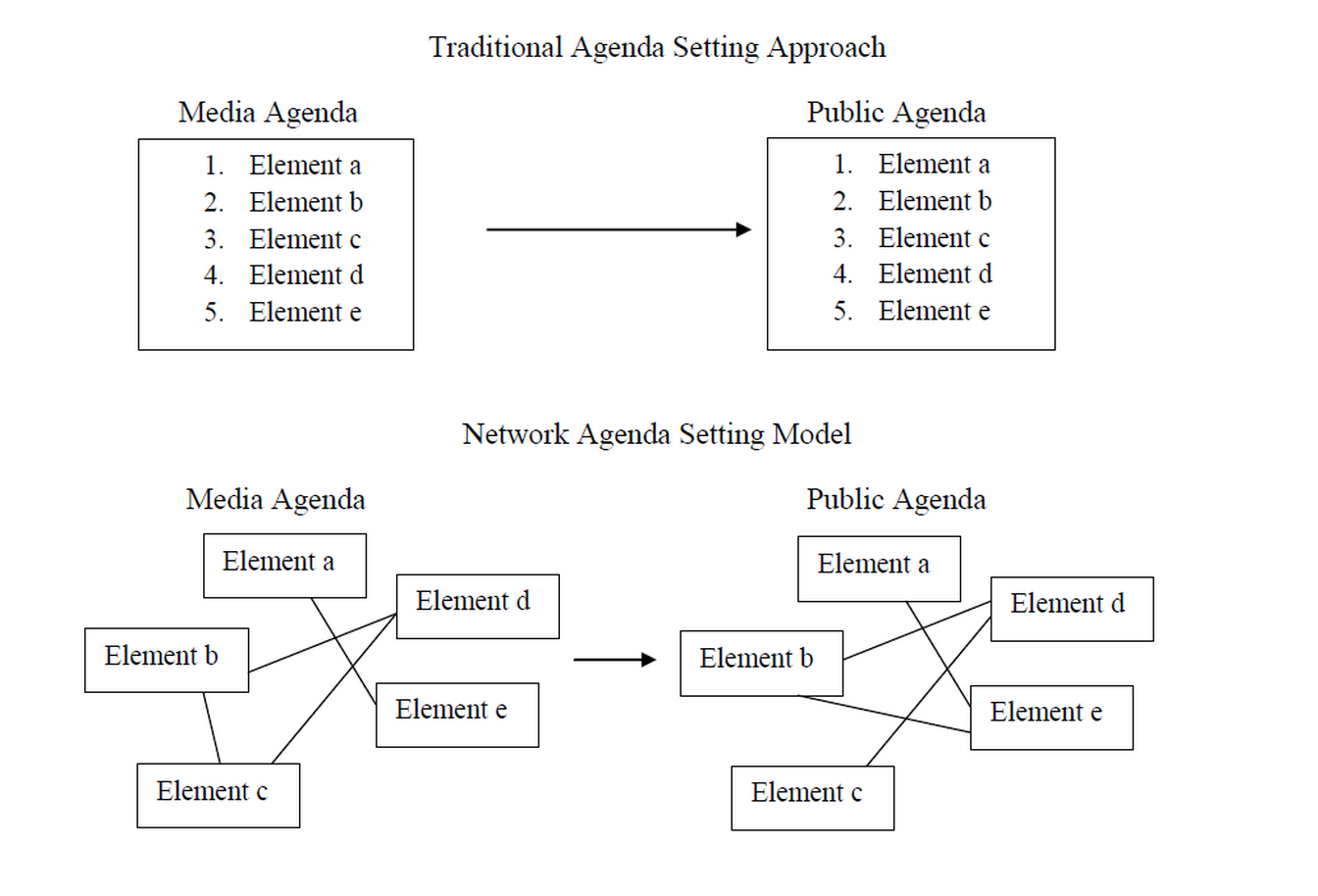 Dr. Lei Guo, Assistant Professor of the Division of Emerging Media Studies, presented an ambitious study in that it not only asks whether media (e.g., newspaper and television) set the public agenda, but also explores whether they can do so in ways more complicated through constructing message networks. Big data analytics and network analysis were used to examine the large dataset collected on Twitter during the 2012 U.S. presidential election.

Seattle-based Tableau Public presented a visual analysis that combined numbers and storytelling.  at the Hariri Institute on Feb. 4 with Tableau trainer Tara Walker.  The event was a demonstration of powerful free software and the revolutionary visual query language that drives it. BU Clinical Journalism Professor and Hariri Fellow, Maggie Mulvihill, moderated the discussion on how Tableau has become a must-have tool for data storytellers today, from major newsrooms to Fortune 500 companies and beyond.

The Division of Emerging Media Studies held its 2nd Open House for prospective students who wanted to come and learn more about the program. This event was coordinated by the division administrator Allison Keir (dems@bu.edu).

Dr. Erik Nisbet (Associate Professor, School of Communication, The Ohio State University) presented his research on the competing influence of Western and Russian media on Russian opinion formation about the Crimea and Putin.

How did the frame contest between Russian and Western media over the conflict in Crimea influence Russian attitudes about Russian intervention in the Crimea? Did mediated public diplomacy through the Western media outlets about the potential costs of Russia’s foreign policy have any impact? Was the strategic promotion of Russian nationalism and historic empire-building by the Russian media effective? What were the consequences of these dynamics for support of Putin’s regime in the short and long-term? Are there any lessons for mediated public diplomacy moving forward? 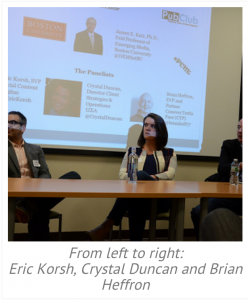 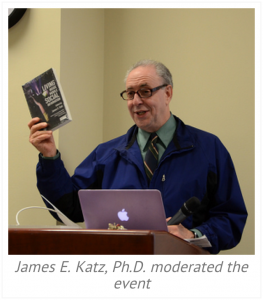 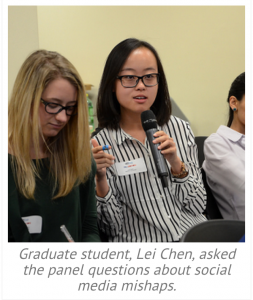 You can read more about the event here: http://bucommunicator.com/2014/11/social-media-gone-rogue/.

When the November election was just weeks away, Data masters from the Federal Election Commission and the Massachusetts Office of Campaign and Political Finance provided a unique “under the hood” look at money and politics information: how millions of records are collected, stored, cleaned, analyzed and presented. BU Clinical Journalism Professor and Hariri Institute Fellow Maggie Mulvihill moderated the discussion on how this data has become an essential and powerful storytelling tool, especially in the post-Citizens United era.

Speakers included Al Grimes, the Chief Information Officer for the Massachusetts Office of Campaign and Political Finance, an accountant and software developer who has overseen the electronic filing of campaign finance reports for over 12 years, as well as Dr. Paul Clark, Disclosure Business Architect for the Federal Election Commission, a data analyst and subject matter expert who holds a PH.D. in political science.

On October 17th, the Division of Emerging Media hosted an open house for the PhD program that will launch in the fall of 2015. This will be the first Doctoral degree program to ever be offered in the 100-year history of BUCOM. Many prospective applicants with diverse backgrounds showed up to the event. 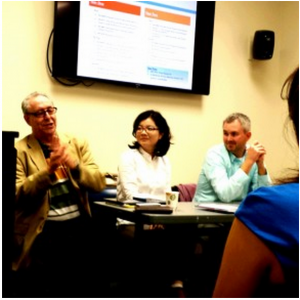 Dr. James Katz, Director of the Division of Emerging Media Studies, Dr. Lei Guo and Dr. Jacob Groshek, assistant professors of Emerging Media, spoke about what PhD candidates could expect from the accelerated 3-year program. The research degree will focus on the social consequences of emerging media. The 4 or 5 Doctoral students will take courses such as Large Datasets and Data Visualization and Content Production in Emerging Media. Candidates are expected to make creative and substantive contributions to the field of emerging media. The program will offer a blend of skills based courses, teaching pedagogy and intense communication research.

You can read more about the event here: http://bucommunicator.com/2014/10/com-launches-groundbreaking-phd-program/. Reporting by Lauren Sale, Emerging Media M.A. 2015

Here is a video which captures the spirit of the centennial celebration.  Watch it to hear members of this great legacy talk about what COM means to them.  For more information, here is an article by Pratyusha Patibandla posted on the BU COMmunicator: http://bucommunicator.com/2014/10/100-years-of-communication/.