This email will interest anyone who is processing very large data files, such as 5 GB or more. Or, if you are frustrated with how long your Window’s updates and other IO intensive tasks take. (Most Apple users are probably already using SSD drives.)

In October the hard drive on my Windows Desktop failed (not entirely: it just became erratic), so I had to buy a replacement.

The BU IT department was able to clone my original hard drive so that I did not have to reinstall any of the software. It ran from the time I turned it on, except that it was much much faster. How much faster? Five to ten times faster on IO bound tasks. These graphs show the difference. 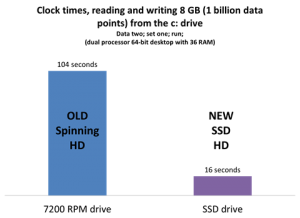 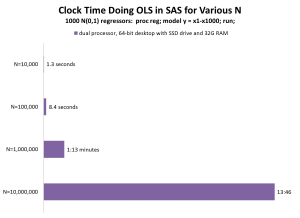 Times using mostly 0-1 binary regressors are much faster than continuous variables, since they can be compacted so nicely.

This graph is just illustrating that SAS can handle very big matrices well, although the sample sizes were fixed at 10k. 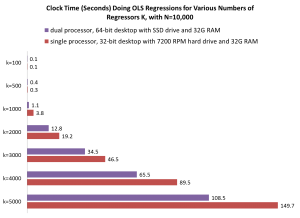 If you are doing a lot of computationally intensive work on moderate size data, then faster CPU, multiple processors, and more RAM is critical. If you are processing Big Data, where the data is larger than your memory, then fast hard drives are the key. SSD drives are 5-10 times faster for most IO tasks.

You can also upgrade your laptop to a SSD drive with lots of capacity. New laptops with SSD and adequate memory will be faster on big data than your desktop with conventional hard drive. I am planning to get one to upgrade my old laptop. I will try to do a better job benchmarking before and after with that upgrade.

For sale at MicroCenter.com (Cambridge) near BU.

I purchased:
Samsung 850 EVO Series 1TB SATA III 6Gb/s mSATA Internal Solid State Drive Single Unit Version MZ-M5E1T0BW
Now $399.99, and was as low as $319. I predict prices to go down for Black Friday next week, and that prices were increased to ready for that “sale”.
“The MZ-M5E1T0BW from Samsung utilizes innovative 3D V-NAND Technology for incredible Read/Write Performance with enhanced endurance and reliability, giving you the most evolved SSD for Ultra-thin Laptops and PCs”

One review, probably by an employee…:
“All I can say is if you have an available mSATA slot open- just do it! That old spinning HD is killing your battery life! They only last a couple of years before they crash!! This is a solid state disk drive – No moving parts to wear out. Especially if you’re accident prone like me and drop it. SSD’s do not have head crashes like spinning hard drives.
The biggest bang for the buck is the performance! the read and write speeds are instantaneous! No waiting at all. Those Microsoft updates that take hours now take minutes. The mSATA drive is very easy to install. The bay is usually under the keyboard (Two screws to remove – Google it for instructions)- just get disk cloning software and follow the instructions. Remove the old spinning piece of rust and you’re off to the races! You can even get an external case to put your old hard drive in and use it for a backup. This little upgrade may breath new life into that old laptop – saving you from having to buy a newer one for a couple of more years…. I’m sure the laptop manufacturers don’t want to hear that!”

You will also need a mounting bracket to hold it in place. I used for a normal 3.5” slot:
http://www.microcenter.com/product/445921/850_EVO_Series_1TB_SATA_III_6Gb-s_mSATA_Internal_Solid_State_Drive_Single_Unit_Version_MZ-M5E1T0BW
Kingwin Internal Dual 2.5″ HDD/SSD to 3.5″ Plastic Mounting Kit
http://www.microcenter.com/product/396605/Internal_Dual_25_HDD-SSD_to_35_Plastic_Mounting_Kit?rf=Add-Ons%3EDrive+Rails%3E

“Outlast and outperform your hard drive. Boot up almost instantly. Load programs in seconds. And accelerate demanding applications with ease. It all starts with ditching your hard drive. Engineered to outperform a hard drive and deliver cost-effective performance, the Crucial BX100 leverages advanced flash memory technology and moves your computer beyond the outdated storage limitations of spinning discs. By transmitting data in a digital manner rather than having to seek it out on a spinning platter, the Crucial BX100 is over 15x faster, 2x more reliable, and 2x more energy efficient than a typical hard drive.”

You will also need an adapter kit it make it fit in the larger size 3.5″ hard drive bays in most PC desktops. Such as

Talk to the staff about the computer you are putting the new hard drive into to get the right adappter kit.

Get help with installing it if you are not experienced. BU IT took less than a day (three hours) to install mine once it was purchased.

With Democratic presidential candidates Hillary Clinton and Bernie Sanders both mentioning Democratic Socialism in Denmark, it is interesting to read about what it actually is.

Here is one link with one persons discussion.

Denmark sounds pretty wonderful to me

I just returned from Switzerland which is not democratic socialism, but rather a federalist direct democracy centered on capitalism much like the US.

The Swiss seem to be doing many things right.

The small city of Solothurn (pop 16,000) we stayed at had the following features. (Based on my visit, augmented by https://en.wikipedia.org/wiki/Solothurn)

Trains that runs on weekends almost as regularly as weekdays. Twice an hour on its two lines on Sunday mornings.

Hundreds (thousands?) of locals from the town using trains to get to the local cable car and go for hikes in the Alps on a Sunday morning in November.

No driving in the center of the city. Only pedestrians or local residents and deliveries.

Trash containers every 100 feet along most public sidewalks.

Bicycle parking for over 100 bikes at the train station.

No large supermarkets or malls that I saw.

Minimum wage of $20 to $25 depending on canton. In May a national referendum to raise it to the equivalent of $24.70 narrowly failed.

Considered the richest country in the world.

Corporate profit tax of 8.5 (national) with some more by cantons (= states)

Health (from Wikipedia on 11/12/15) https://en.wikipedia.org/wiki/Switzerland

Swiss citizens are universally required to buy health insurance from private insurance companies, which in turn are required to accept every applicant. While the cost of the system is among the highest it compares well with other European countries in terms of health outcomes; patients who are citizens have been reported as being, in general, highly satisfied with it.[151][152][153] In 2012, life expectancy at birth was 80.4 years for men and 84.7 years for women[154] — the highest in the world.[155][156] However, spending on health is particularly high at 11.4% of GDP (2010), on par with Germany and France (11.6%) and other European countries, and notably less than spending in the USA (17.6%).[157] From 1990, a steady increase can be observed, reflecting the high costs of the services provided.[158] With an ageing population and new healthcare technologies, health spending will likely continue to rise.[158]

This all sounds pretty attractive to me. Why can’t we look at successes in Europe more and imitate them?