Health economists and every concerned citizen should disseminate the facts in this NEJM article about Donald Trump’s nominee of Tom Price to be the next secretary of HHS.
Coauthor Richard Frank is also a BU Ph.D. alum!

Care for the Vulnerable vs. Cash for the Powerful — Trump’s Pick for HHS

Since there is no abstract, here are the first two paragraphs.

Representative Tom Price of Georgia, an orthopedic surgeon, will be President-elect Donald Trump’s nominee for secretary of health and human services (HHS). In the 63-year history of the HHS Department and its predecessor, the Department of Health, Education, and Welfare, only two previous secretaries have been physicians. Otis Bowen, President Ronald Reagan’s second HHS secretary, engineered the first major expansion of Medicare, championed comparative effectiveness research and, with Surgeon General C. Everett Koop, led the fight against HIV–AIDS.1 Louis Sullivan, HHS secretary under President George H.W. Bush, focused his attention on care for vulnerable populations, campaigned against tobacco use, led the development of federally sponsored clinical guidelines,2 and introduced President Bush’s health insurance plan, which incorporated income-related tax credits3 and a system of risk adjustment. In their work at HHS, both men, serving in Republican administrations, drew on a long tradition of physicians as advocates for the most vulnerable, defenders of public health, and enthusiastic proponents of scientific approaches to clinical care.

Tom Price represents a different tradition. Ostensibly, he emphasizes the importance of making our health care system “more responsive and affordable to meet the needs of America’s patients and those who care for them.”4 But as compared with his predecessors’ actions, Price’s record demonstrates less concern for the sick, the poor, and the health of the public and much greater concern for the economic well-being of their physician caregivers.

Since the NEJM full article  requires a subscription, here is a summary what they document:

Price has sponsored legislation that

His proposal for repealing and replacing the ACA is H.R. 2300, the Empowering Patients First Act,5 which would

Consider what you can do to make sure that these facts are widely known. Perhaps ask your legislators which of these views they support.

This email will interest people who are closely following the US presidential election.

I invite you to watch the following four minute video on Trump and Hillary when you have time. It changed my thinking.

On the Friday June 2  Real Time with Bill Mayer, Scott Adams (who is the genius creator of the Dilbert comic strip) gave a very sober assessment of why Trump has been so successful. Adams is a trained hypnotist and has written several books on the art of persuasion.  Adams has a blog and LAST SUMMER he predicted Trump would win by a landslide. This, plus his careful comments were very real to me. According to Adams, Trump is not a fool, but rather he is a high IQ master persuader.

The Real Time clip was taken down on YouTube, where they want you to subscribe to Real Time, but it is still linked here.

Here is a link to his the Scott Adams blog.

Here is  a link to his October 2015 blog where he predicted Trump will win in a landslide.

“The latest poll out of Iowa shows Carson ahead of Trump. And you know what that means?

It means Iowa is about to become irrelevant. Here I am assuming evangelicals will band together to give Carson the win in Iowa before Trump goes on to run the table everywhere else.”

I also liked this review from the Washington Post in March 2016. It summarizes the six principles Trump is using to win.

Here are the final lines from that Washington Post article.

Writes Adams: “Identity is always the strongest level of persuasion. The only way to beat it is with dirty tricks or a stronger identity play. … [And] Trump is well on his way to owning the identities of American, Alpha Males, and Women Who Like Alpha Males. Clinton is well on her way to owning the identities of angry women, beta males, immigrants, and disenfranchised minorities.

“If this were poker, which hand looks stronger to you for a national election?”

Watch the Real Time interview. And think about how you can get your favorite politician – local, state or national – to be better at persuasion and the use of modern media. 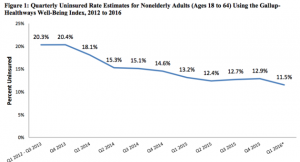 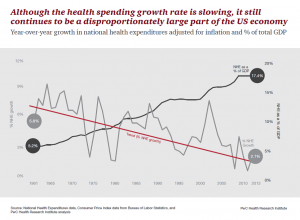 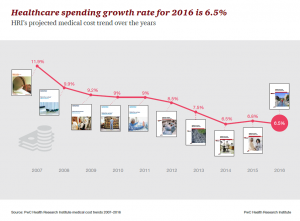 Time to change the discussion #1

This is the first of five posts on my blog on how discussion of taxes and budgets in the US needs to change to improve decision-making.

Recent political debate and the media throws around costs of millions, billions and trillions of dollars even though there is no easy way for an ordinary citizen to evaluate the meaning of these terms. All of these are very big numbers. Consider the following numbers, sorted from largest to smallest. Which ones should we be worrying about?

$1.2 trillion Size of tax increases and budget cuts in the fiscal cliff [3]

$ 446 million The FY2013 annual budget for the Corporation for Public Broadcasting. [9]

$ 3,500                  Extra cost per person per year to eliminate the federal deficit for 2012. Although similar to the preceding, note that this is for one year, while the above is over ten years… Even jumping over this cliff does not eliminate our deficit.

$ 270 Average per year cost per person of Bush-era tax cut on >$250k Doesn’t look like such a big number, and this is how much it reduces our per person annual deficit.

$13,500 Average per year cost per wealthy person (top 2%) of Bush-era tax cuts. Recall that the average income of this group is way higher than $250k

$4,500                   Cost per Newton resident of the Newton North High School. High, but I bet we more than made it back in increased property values. Even ignoring that more than half was funded by the state, if there are 4 people per household, then this is only 2.6% of median property value in Newton.

Big cost numbers are easier to understand when expressed as a cost per person.

The numbers that get a lot of play in the media are not necessarily the right numbers.

Thought to Ponder: Why is it that almost no one in Newton is worried about having incurred a debt for one school in the amount of $4500 per resident, while citizens, and our Congress in particular, seems paralyzed to contemplate reducing our federal debt by a similar amount?

[6] Congressional Research Service, 2011. The Cost of Iraq, Afghanistan, and Other Global War on Terror Operations Since 9/11. http://www.fas.org/sgp/crs/natsec/RL33110.pdf updated continually at “Cost of War at http://costofwar.com/.

Looking ahead 20 years, it is inconceivable to me that the US will sustain its current archaic primary system for selecting presidents. The new party Americans Elect is one possible new approach. It is getting little publicity relative to the Republican Primary, even though AE is now on the ballot in 25 states. Along with many others, I prefer Obama to the current roster of candidates at Americans Elect, (which includes BU’s own Larry Kotlikoff) but I look to AE to play an important role at debates and in our national discourse, even for the coming election. Here is a recent press release from their web site, at http://www.americanselect.org. Worth a visit.

WASHINGTON, D.C., APRIL 19, 2012 – Americans Elect has secured ballot access in 25 states. Over 2.5 million people have signed petitions across the country. Demand for a third choice in November is real and Americans Elect is offering that choice. Citizens from across the political spectrum are signing up to change this election and let the people, not the parties, nominate and elect the leadership in the country.