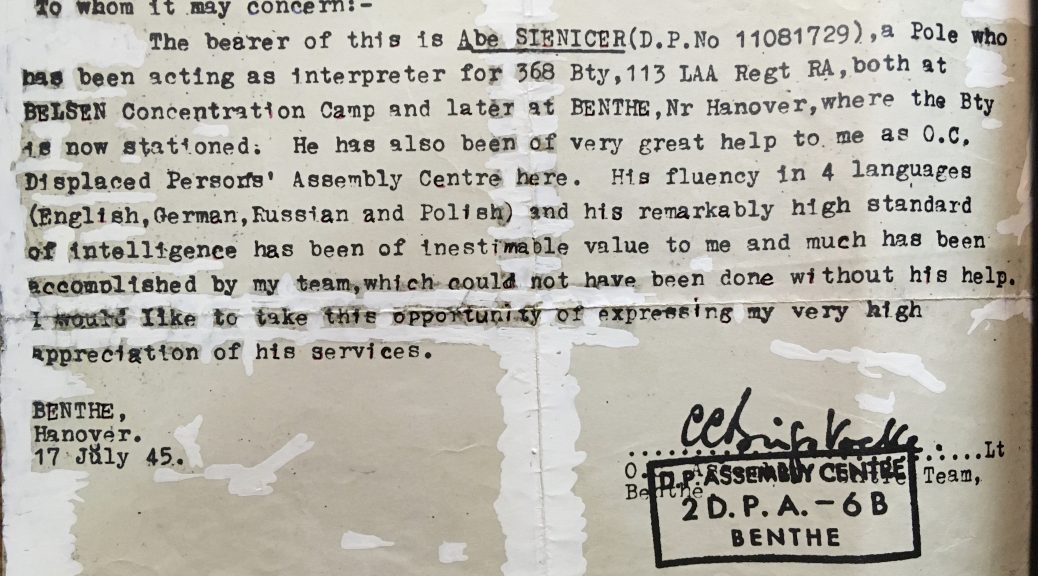 Today is April 15, the day, 75 years ago, when the 11th Armored Division entered the gates of hell that was Bergen-Belsen. If you want to know what it looked like, spend eleven long minutes to listen to BBC correspondent Richard Dimbleby’s description from April 19, 1945.

April 15 is what my father-in-law, York University professor emeritus of mathematics and statistics Abe Shenitzer used to call his second birthday. He was among of the 40,000 survivors who greeted the British liberators at the gate of the concentration camp. The attached document attests to his incredible resilience. By July 1945, the British officer, signing the document, attests to Abe’s services as an interpreter.

Aside from his love for learning, his wit and humanity, Abe brought with him a fierce devotion to linguistic precision. He went on to become a sought-after translator and editor of books on mathematics and other subjects. He was also a superb teacher.

Born in Warsaw, Abe had grown up and attended Heder, followed by a Hebrew Gymnasium, in Sosnoviec, Poland. In 1943 he was deported to Gross-Rosen (referred to by inmates as the yeshive) from whence prisoners capable of labor were farmed out to the hundreds of labor camps dotting the so-called General Gouvernement, a virtual SS state. He considered himself fortunate that he was placed in a wood-working factory (Hubert Land Werke, Bunzlau) where he worked sawing and planing machines alongside German and other workers, and could forget for hours at a time that he was no longer human. There was starvation, of course. But he rarely spoke of being brutalized, and attributed his survival to the kindness of a few strangers at key moments.

When the Germans began to evacuate the east, moving prisoners westward, Abe’s odyssee led him via Nordhausen, Risa, and Ellrich to Bergen-Belsen where he was liberated by the British. This month he turned 99. Twice.

For more on Bergen-Belsen, see the following links: