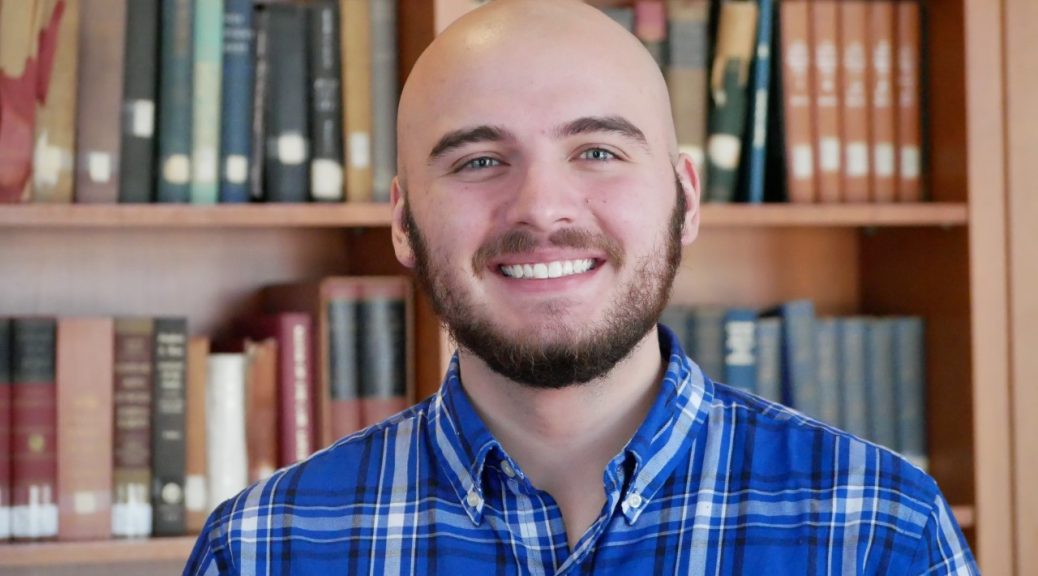 Meet Connor Dedrick (QST ’21) a Princeton, NJ native who works as an undergraduate employee at The Elie Wiesel Center. We sat down with him to talk about the Jewish community at Boston University, his involvement at the Center, and his new role as President of BU Hillel.

Tell us a bit about your experience so far at BU. What is your major/minor? Are you involved in any student organizations, sports teams, community service work, etc.?

My major is business administration and I have a minor in religion. Everything has been so fantastic—I love my business courses, but I find that the religion classes that I’ve taken have been the ones that really provoke some deep thought and some personal growth. Outside of the curriculum, I work at the Elie Wiesel Center, which is a great thing. I love talking to Theresa, our Program Administrator and Professor Zank, our Director because they’re such insightful and smart people. I’m also president of Hillel. I love being able to build on our Jewish community on campus. For most other college campuses it’s hard to come by such a large and close-knit Jewish community.

You began your tenure as the president of BU Hillel in January, 2019. How did you come into that position? What does that role entail?

I went to Hillel the first Shabbat of my freshman year. I met the then president, Zoe, and just kept talking with her and then eventually when elections came around she convinced me to run for Director of Fundraising. As it turns out, no one actually ran for treasurer so she convinced me to run up. I was elected treasurer and then I thought, you know, president is next. My position entails planning a lot of the larger events—things like Latkepalooza, our Chinese buffet event, therapy dogs, the name readings. The building of overall the Hillel community is what my job is focused on.

Tell us about your involvement with The Elie Wiesel Center for Jewish Studies. When did you first join the team? What are some of your day-to-day responsibilities?

I was really good friends with Deni Budman, another EWCJS student employee, through Hillel. When two of the former student employees had graduated she put in a good word with Theresa to help get me here. Day-to-day a lot of what I do is distributing flyers and our other promotional materials to co-sponsors and departments that may be interested in our events. I also compile mailing lists, contact lists, create some of the course materials—like the Fall 2019 flyer I was just working on.

What do you enjoy the most about working with the Elie Wiesel Center team?

I think, for me, it’s carrying on the legacy of Holocaust education through Elie Wiesel. When my mom went to BU she took a class that Elie Wiesel taught and so I think to work here is a very nice continuation of his work overall. Outside of the work aspect, I also enjoy just talking to Theresa and Professor Zank. As I said, they’re such insightful people who have really great things to say about the world, Judaism, and everything like that.

What does the Jewish community at BU mean to you? Do you feel as though you’ve grown in your faith/identity since beginning school here?

Yes. Absolutely. So where I’m from, Princeton, New Jersey, it’s a very big conservative Jewish community. For most of my life that was really the only kind of Jew that I had been introduced to. When I got to BU, and all of a sudden there are 4,000 Jews, you know, secular, reform, conservative, Orthodox. I felt like I got so lost. I had no idea what to call myself because I was still raised conservative, but there were things about Orthodox that I liked, there were things about reform that I liked. By learning through Hillel with the Rabbis I was able to grow my identity to a much more abstract level and not feel like I have to put myself into a denominational box.

How would you encourage others to get involved with the BU Jewish community?

I think the best way is to show up. Just go to things! That’s how I became so involved…I just showed up. I showed up to Shabbat and people welcomed me and I felt like that was my place. You have to put yourself in places where things can happen to you. Opportunities aren’t always just going to throw themselves before you, you have to put yourself out there, you have to go out to events that may interest you, or they may not. But if you don’t, you won’t find the community for you. I think that another thing is don’t be afraid to do things alone. I think what holds a lot of people back from going to a lot of really interesting academic lectures and things like that is because their friends aren’t going. But I think that if people overcame that they would really find a love of learning and really stoke some intense passions.