BU Women’s Water Polo is back! After waiting for the “all clear” to begin practicing from Club Sports and finalizing COVID-19 practice protocols, the Dawgz have made their return to the water. Our first official practice back was on 10/18.

In order to adhere to COVID-19 guidelines, each player will have their own lane and their own ball for the entirety of practice. Furthermore, the team has been divided into cohorts of about 5 or 6 people to ensure social distancing. While this looks much different than our practices from the past, we absolutely LOVE being back in the water and practicing the sport we all love, and most importantly, being (safely) surrounded by the people we love!

Unfortunately, due to COVID-19, we were not able to accept new members for the Fall 2020 semester. While this was definitely an unforeseen obstacle, we are excited to hopefully welcome potential new players next semester! 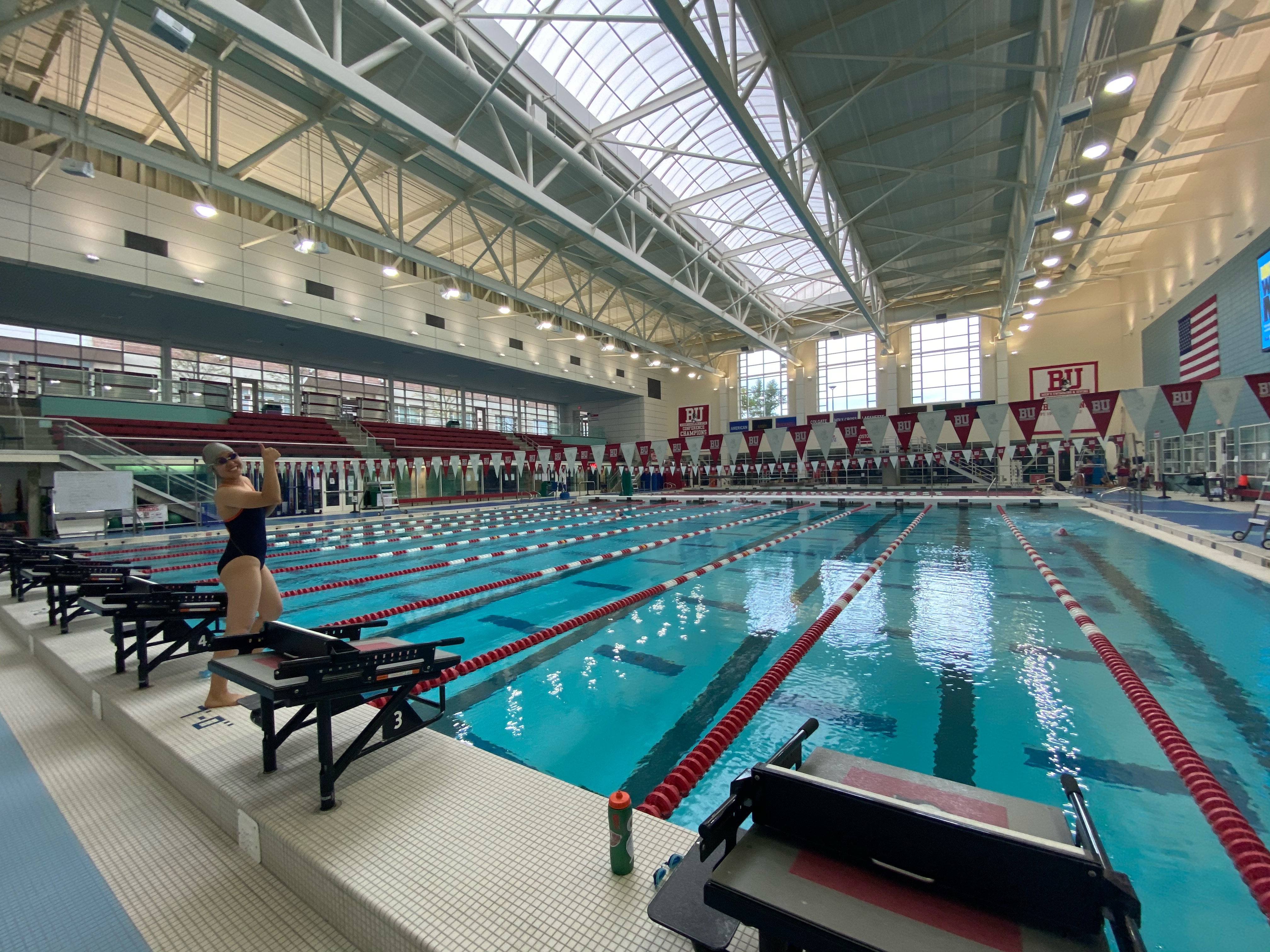 Pictured: Senior Caitlin Yam striking a pose before diving in for warm ups! (10/25/20) 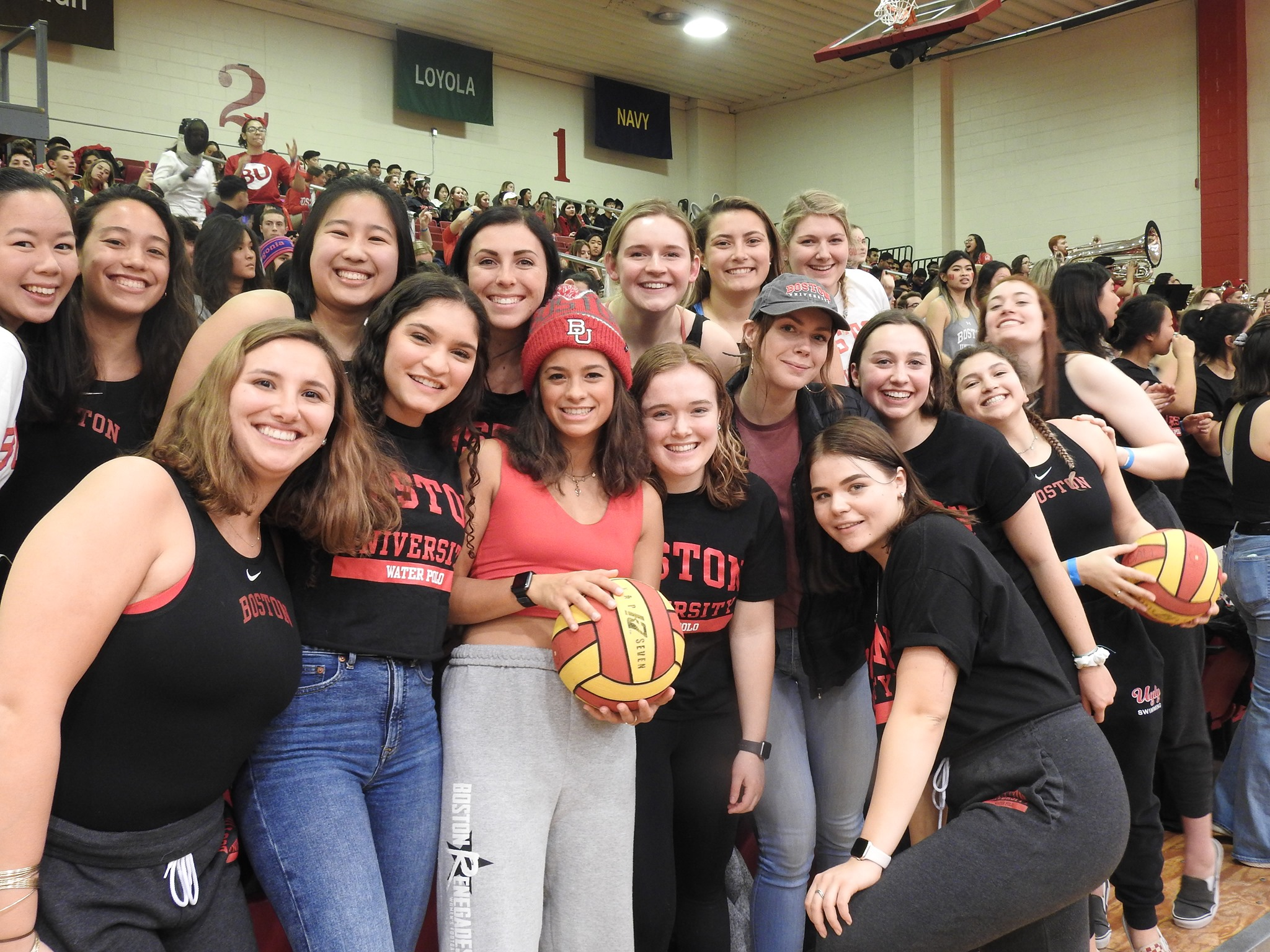 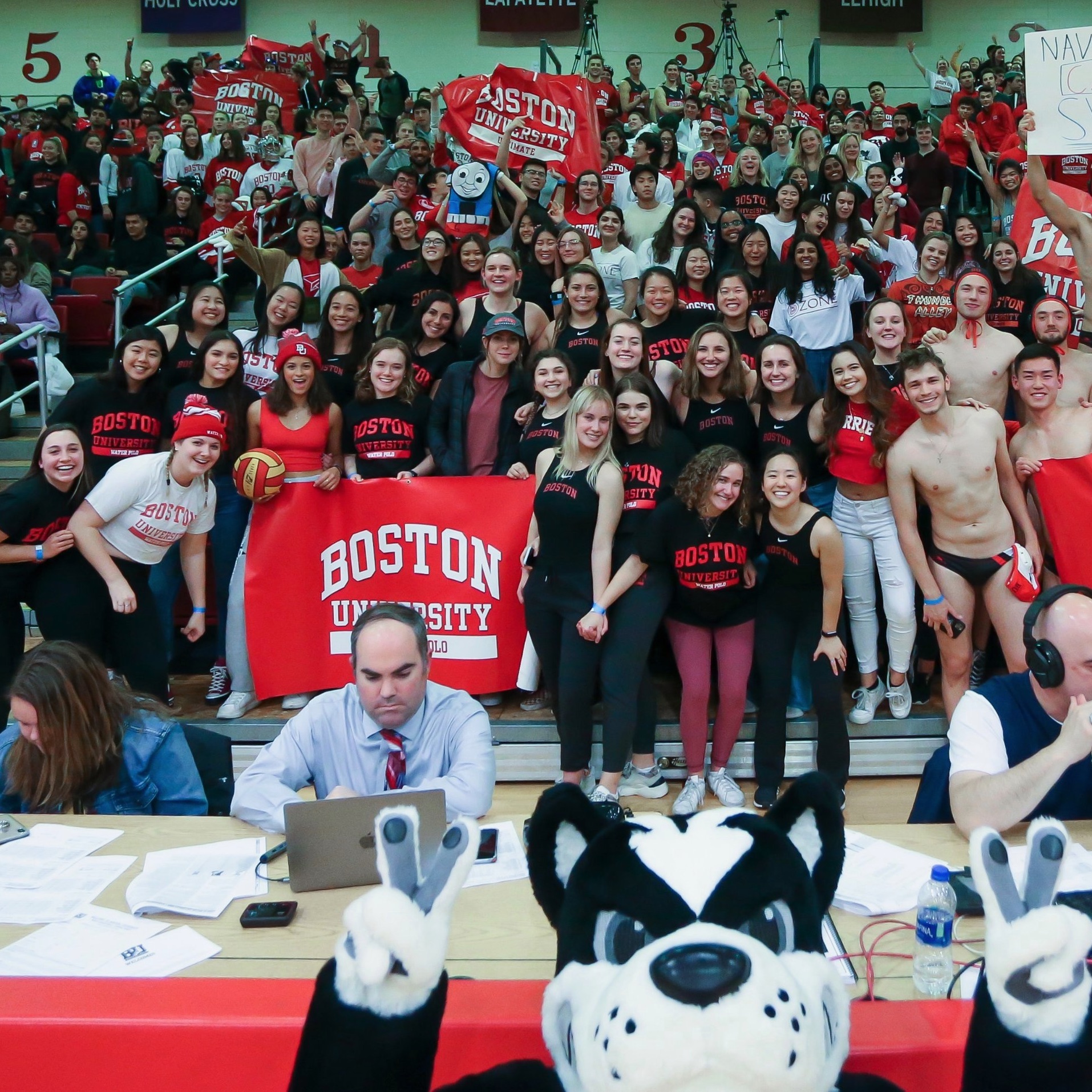 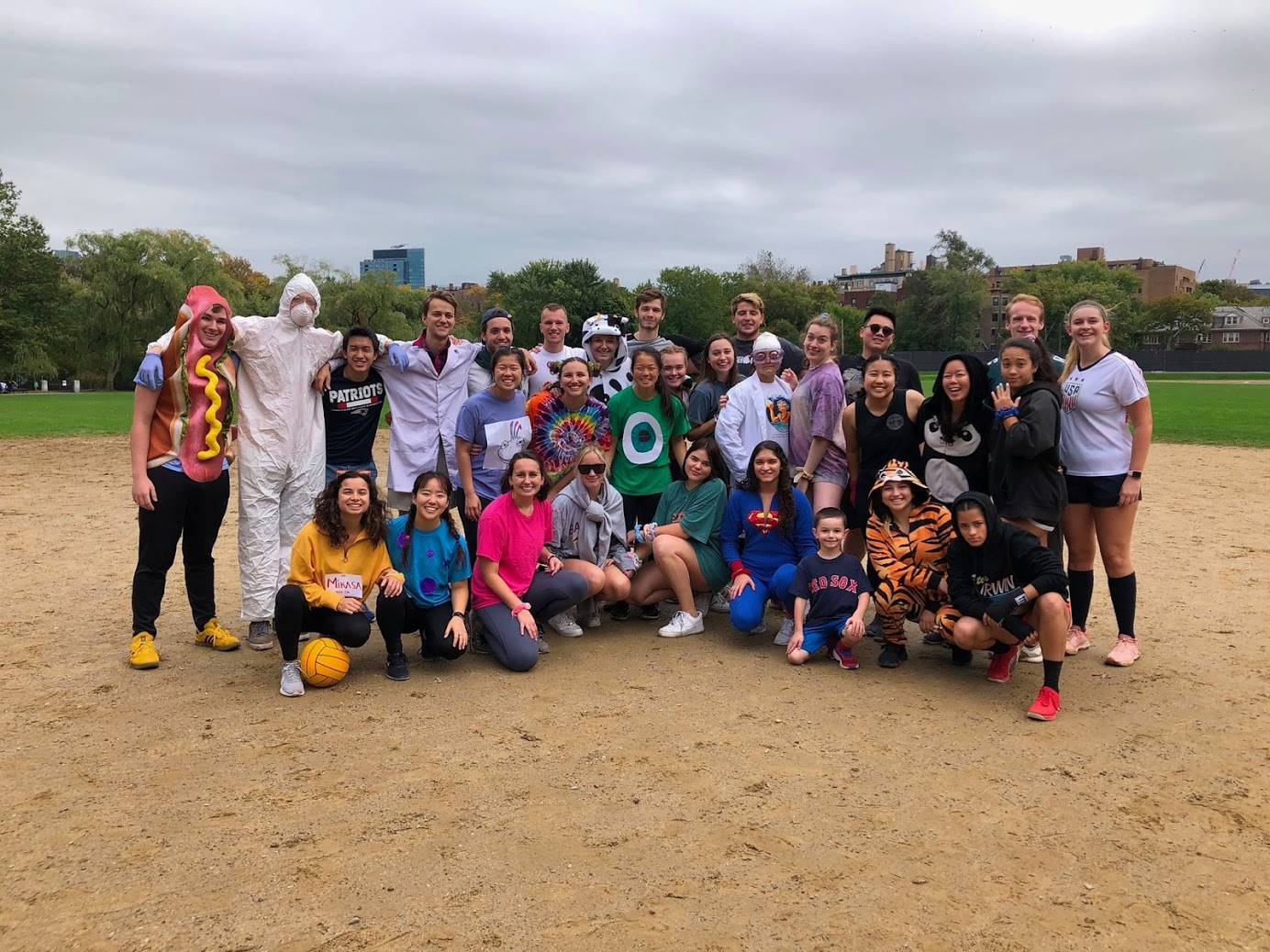 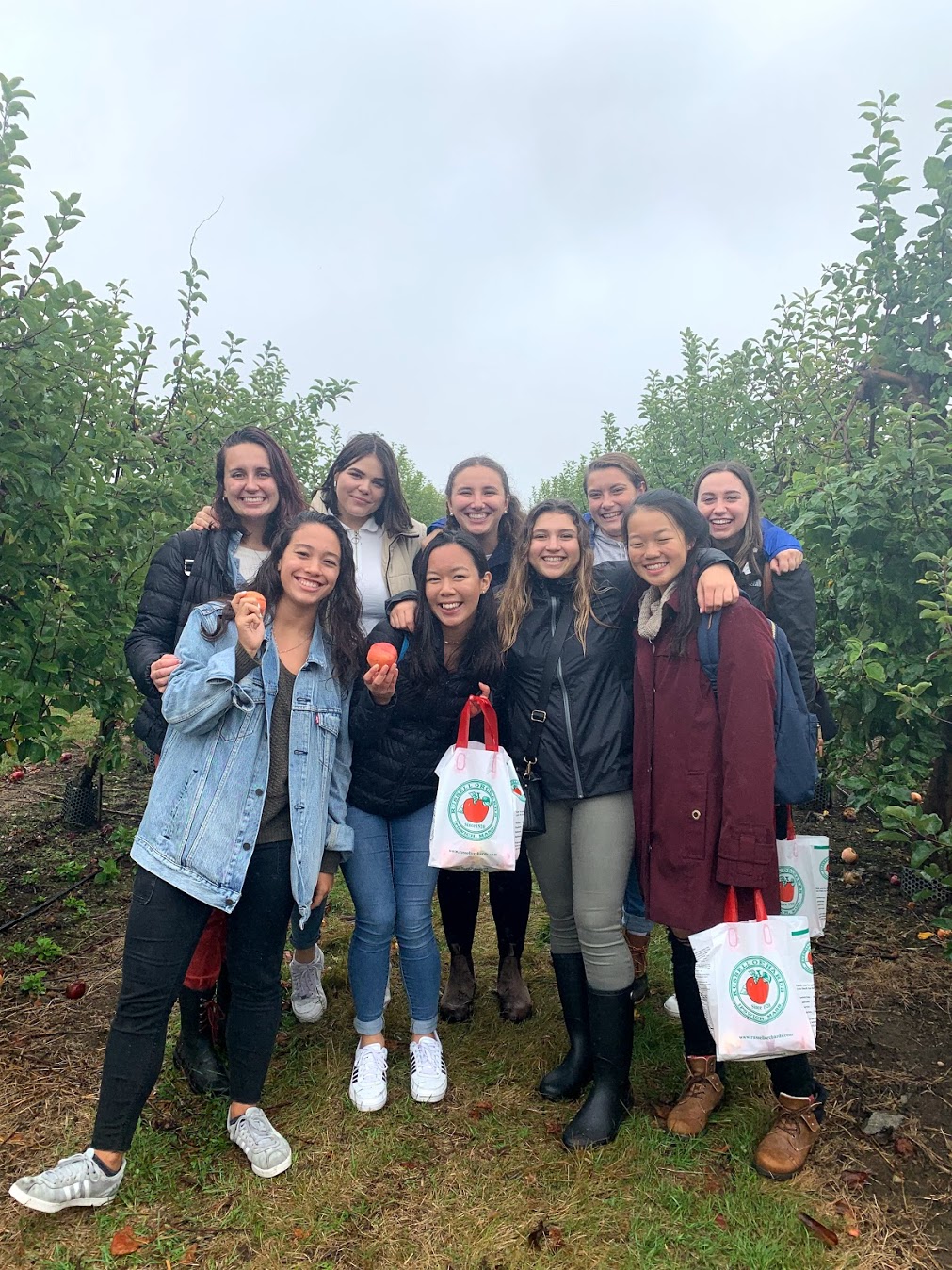 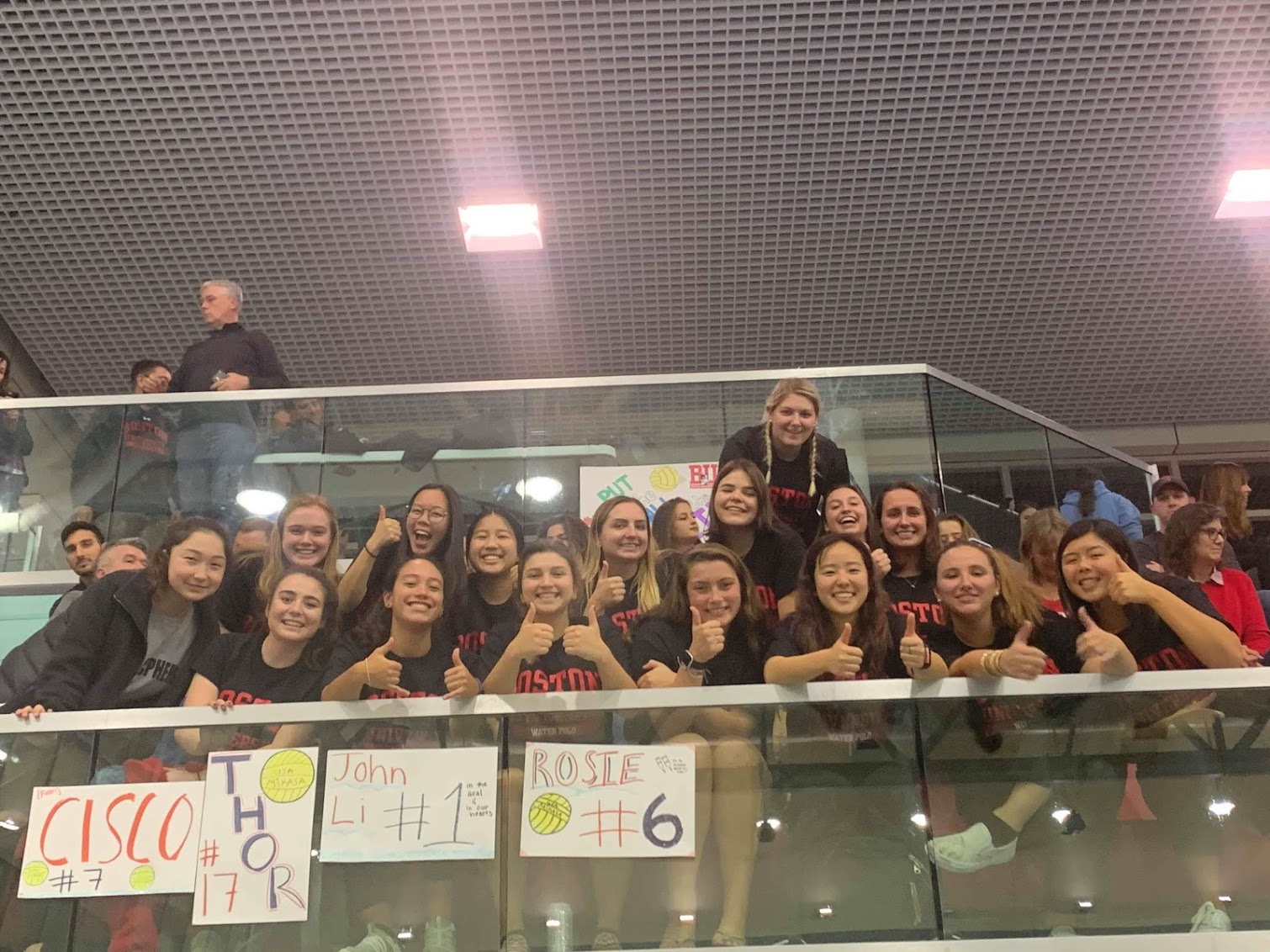 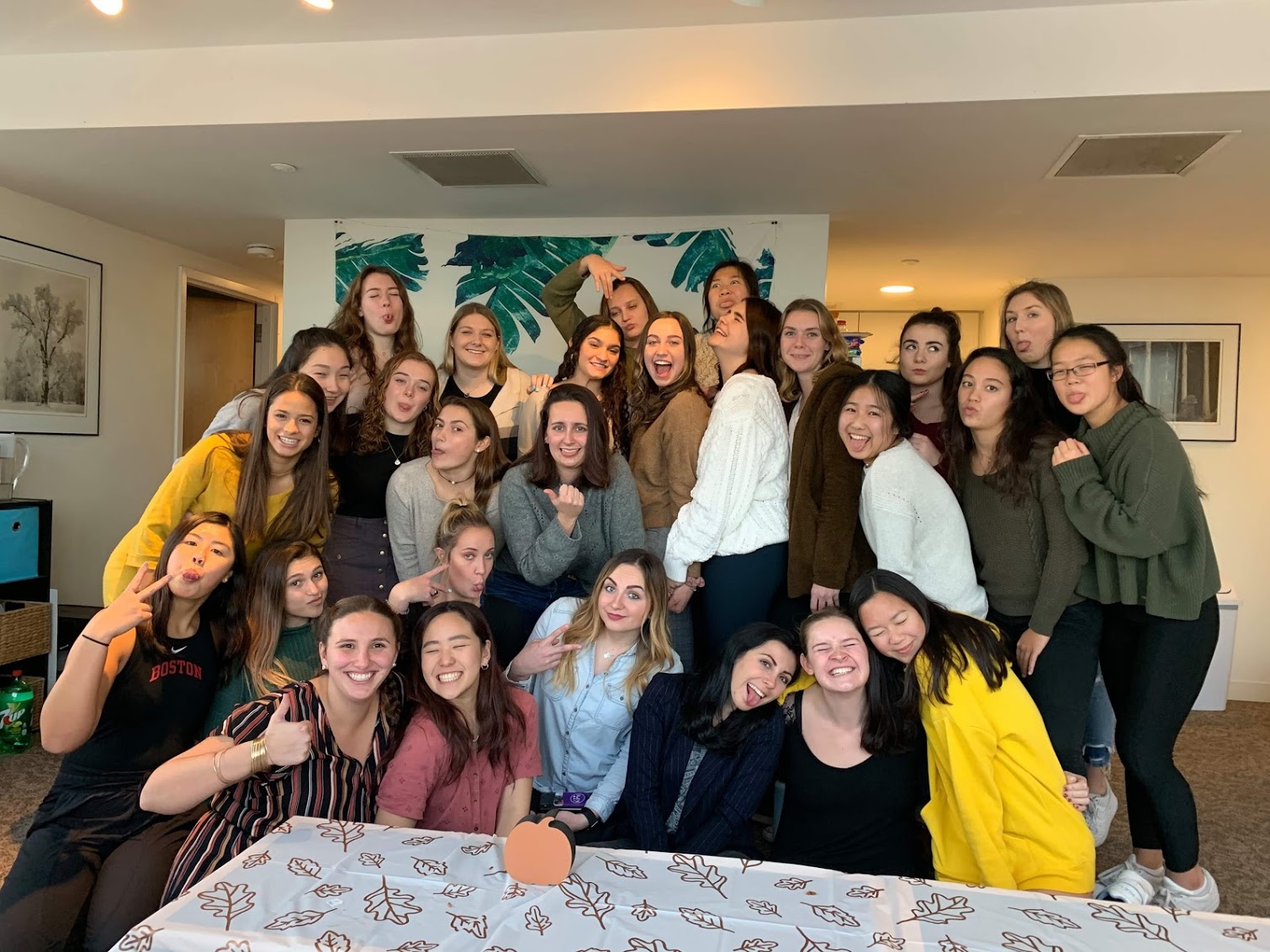 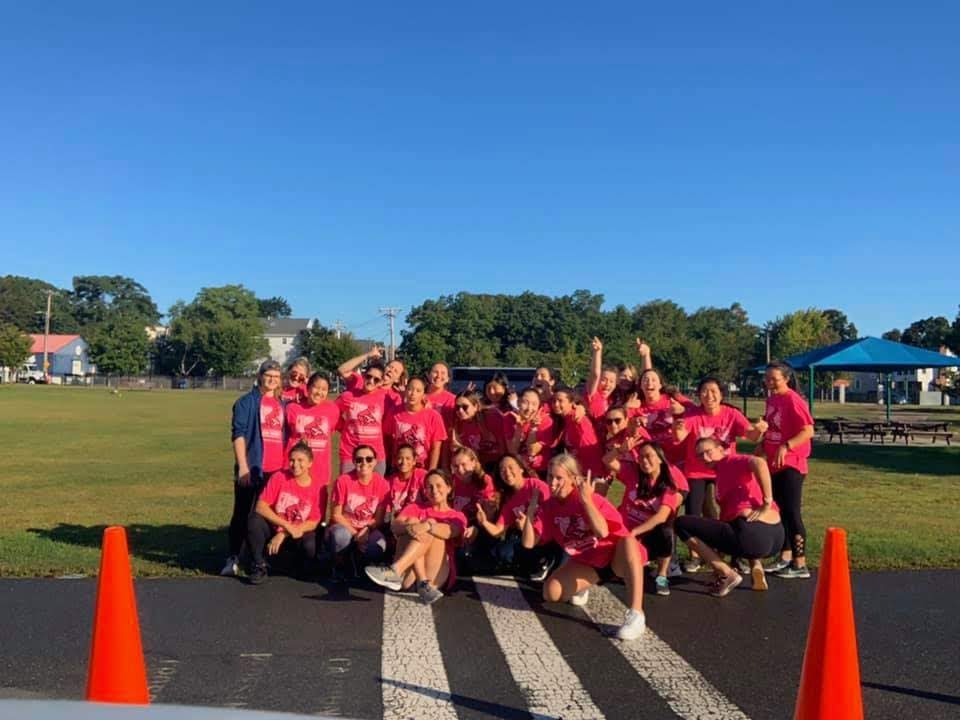 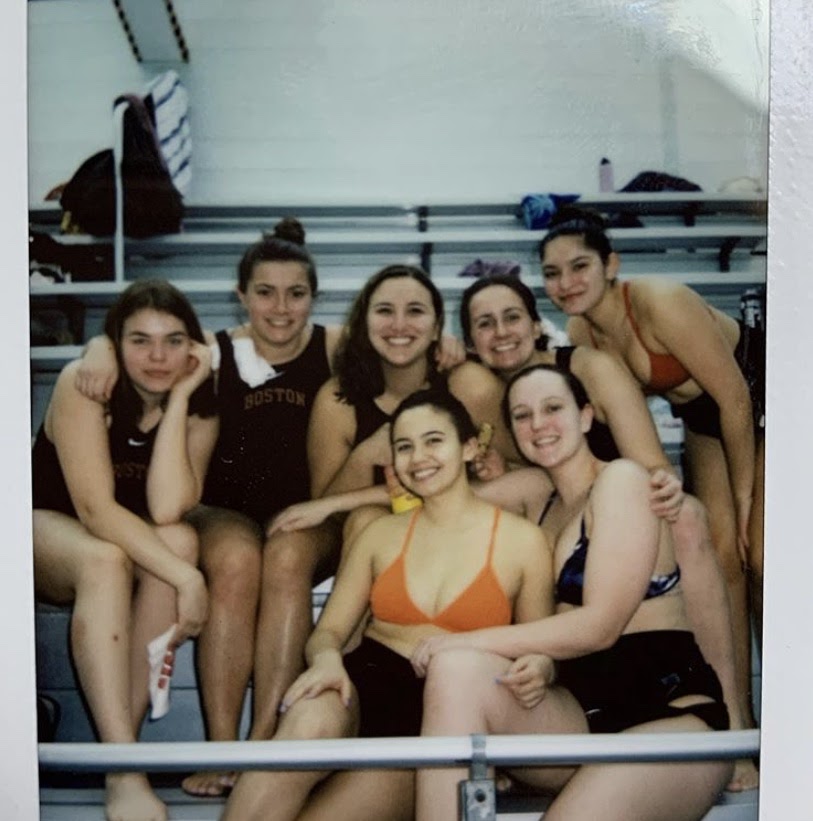 Hello BUWWP fans! While there has been a brief hiatus from this page, we are determined to update this page and keep it consistently updated! Since our last post here over a year ago:

We had our first tournament in February and came away with 3-1 wins with our only loss to Boston College.  But we get to take another shot at beating them again during our home tournament April 6th and 7th.  We will play at 4pm and 6:45 Saturday with our senior celebration at the Saturday night game.  Sunday we will play 2:10 and 5:50, so if you are in the Boston area, be sure to stop by and show your support! We also have Giving Day on April 3rd.  Be sure to donate if you can!

• $65 pays a student’s dues for the semester if they can’t afford it. Allowing them to fully participate in our team and community here at BU.

• $100 supports a year of marketing and fundraising efforts for our team.

• $500 covers the cost of our Austin Brashears’ Memorial Alumni Tournament.

Last year your generosity helped us take 2nd place in the Collegiate Water Polo Association’s 2018 NE Women’s Club Water Polo Championships. In addition, we were able to subsidize the cost of new, black suits for all our players and travel to Los Angeles for a training trip over winter break.

During our winter break the team was able to take a trip to Los Angeles to practice some water polo and catch up with alumni on the West Coast! While some of our practices were cancelled for the rain (apparently we brought the rain with us) we still had an awesome trip! We were able to explore Santa Monica, Huntington Beach, El Segundo, the Griffith Observatory and many more! While we were sad to say goodbye to Andi and Macella, who are going to have a blast studying abroad, the new players got to meet Madie and Mary who are back from abroad. We are very thankful for the support of our alumni who helped us to make this trip happen! Check out the video of our trip. 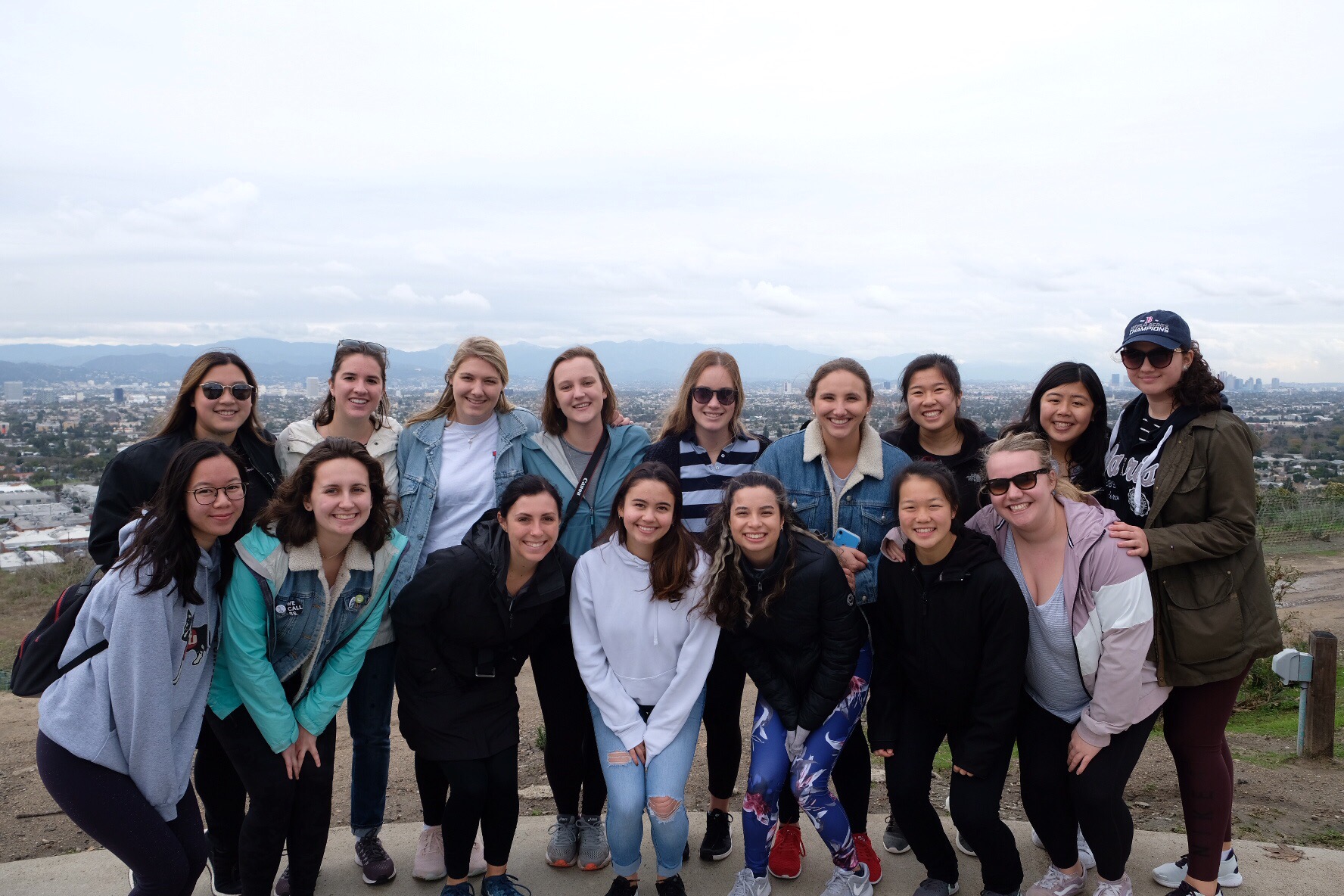 As we head into Thanksgiving break, we are limited in the number practices we have left, but we certainly aren’t letting the end get the best of us!  This past weekend we went to New Hampshire to volunteer at a 5k, for Girls on the Run.  While the event was canceled due to the weather, we were still able to have a great weekend! After team breakfast we climbed Mount Major, and although we had some first time hikers, were able to climb the mountain and get some awesome photos along the way! 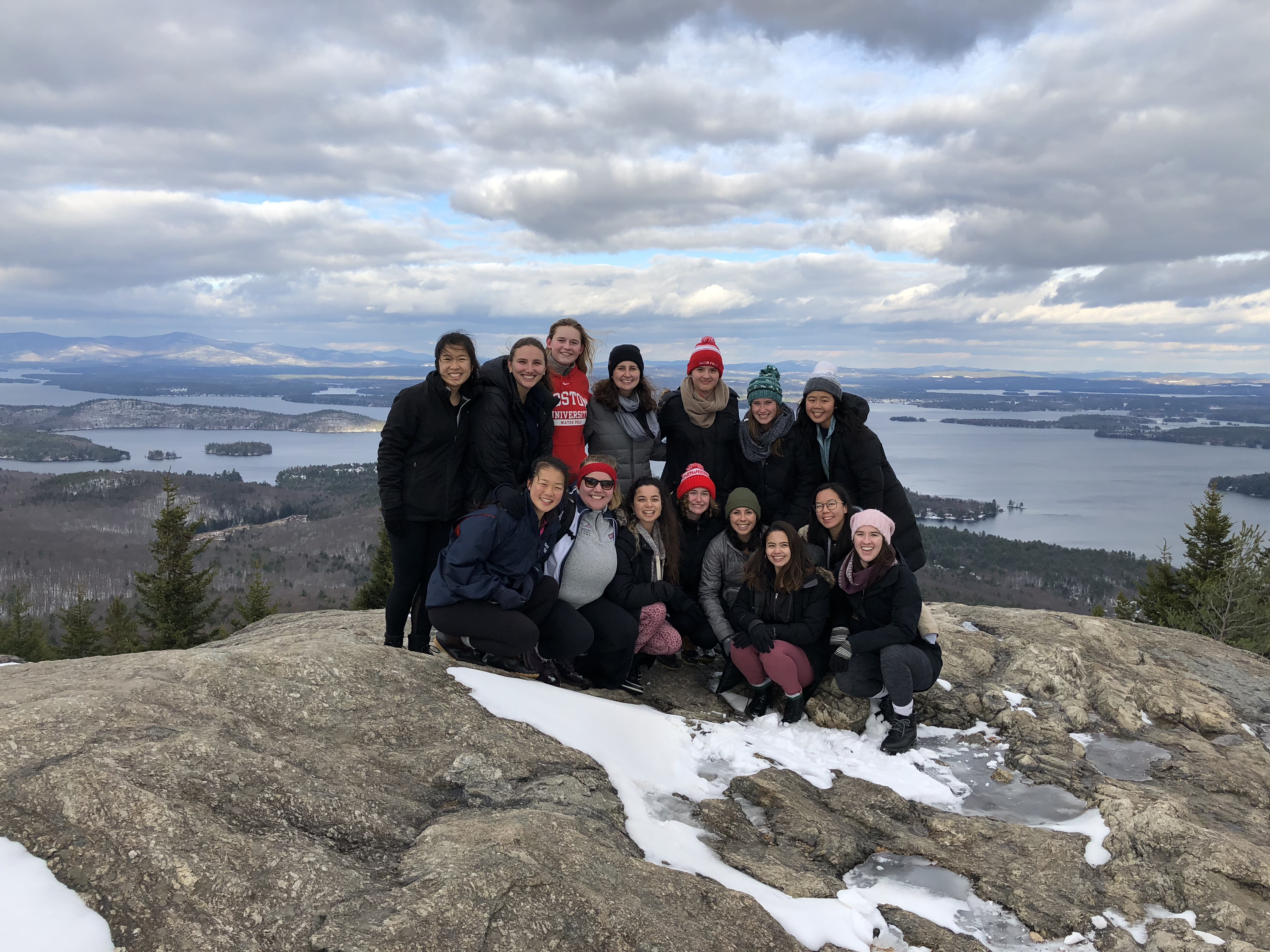 The team on the top of Mount Major!

After the hike we were able to enjoy the resort before having an awesome sit-down Thanksgiving dinner!

We are looking forward to a round robin scrimmage the first weekend in December with Northeastern and MIT.  The next weekend we will be having another scrimmage with Boston College! So while we are all  looking forward to the holidays and semester winding down, we are geared up to finish the season strong!

Before we meet all of our potential new teammates at Splash on September 8th from 12-2pm, lets check in on some of our recent grads and see what they are up to!

Lindsey Stevens is living a new apartment with her new 10 year old kitty, in Brighton working as an EMT while she gears up for grad school.  Through her crazy hours she always manages to reach out to old (although it doesn’t seem like it ) teammates and keep in touch.  She is loving not having the stress of midterms and finals but she does miss having some really awesome academic conversations that she got during her time at BU.  We miss you mucho but love to hear how well you are doing!

Next up is Camilla Stejskal! She is also living in the Boston area and is currently working as a lab manager and researcher with the BU Department of Chemistry but is looking for a position in research or biotech before continuing her studies! The focus of her work is understanding protein function using biochemical and molecular biology laboratory practices.  She is a big believer that biochemical research access problematic corners of science such as sustainable development, industrial chemical production and healthcare in a fascinating and decisive way! She appreciated the base knowledge and networks she has made at BU and how she has been able to use and expand them in her field.  She’s missing the water polo community very much, and claims that joining a new sport was one of her fondest memories from BU, aside from earning her degree! Keep killing it girl, we are proud!

Varsha Srivastava has been living it up this summer and we are all jealous she got to spend time in New York City with another alumni, Roslyn Harold, and celebrate Roslyns birthday together since she moved to Texas two years ago! She is headed back the Bay area for a little bit before she heads off to Barcelona!! She will be studying abroad there in the fall.  Although she still has school left, she misses practicing with the team and getting a regular work out in! Have lots of fun in Spain and please send photos! 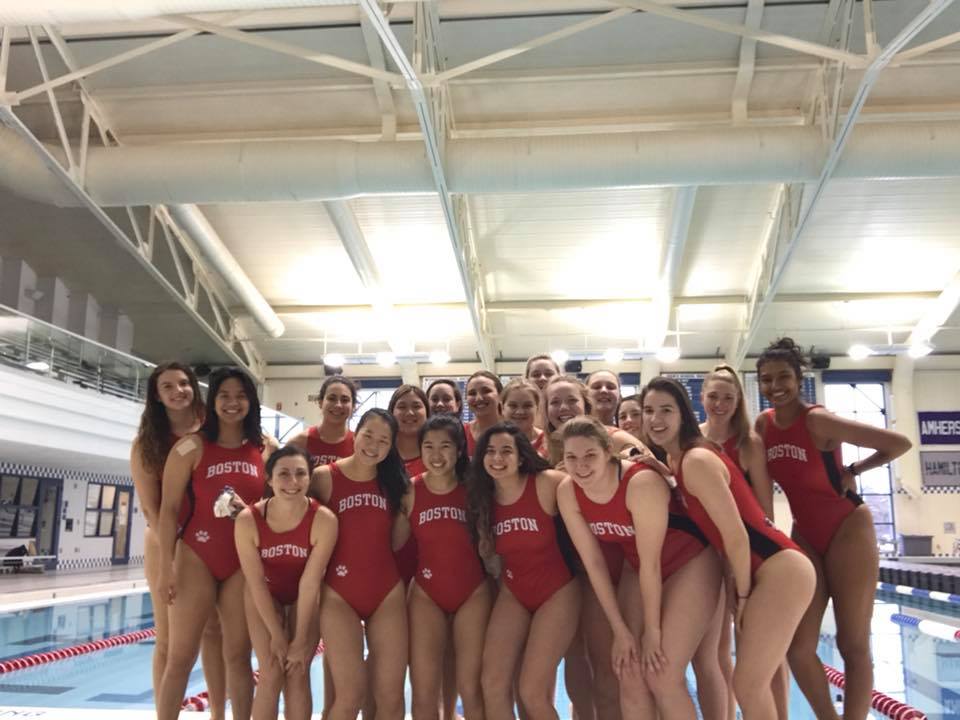 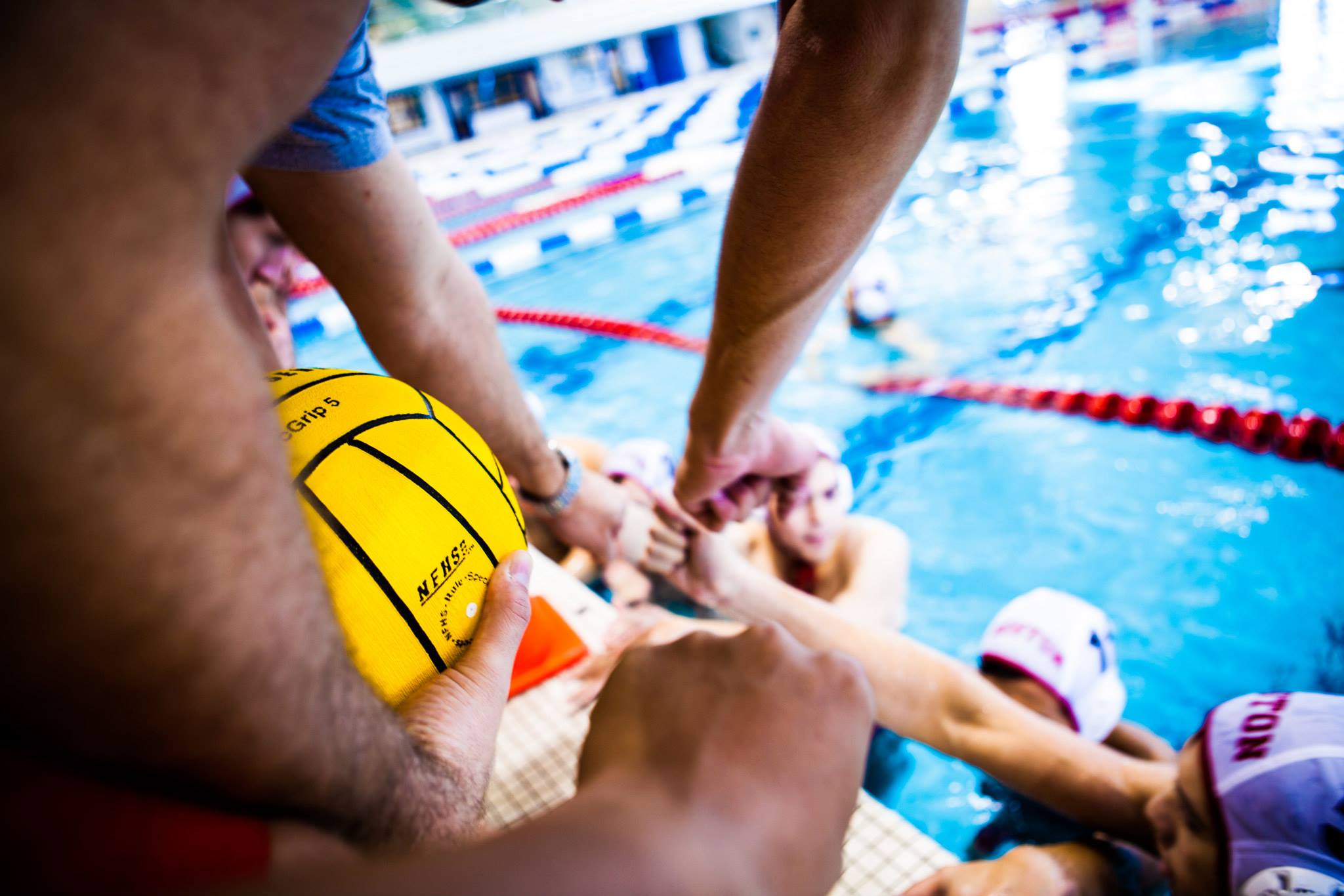 It’s official! The 6th annual Austin Brashears Memorial Alumni Tournament will be held at Boston University’s Fitness and Recreation Center on Saturday March 17th. Games will start at 1 p.m. Stay tuned for more information about the schedule for the event and information on the reception following the games.

Click here to see a video recap of the event last year!

In addition, each year at the tournament both the men’s and women’s teams sell raffle tickets to raise money for the Austin Brashears Scholarship. Various gifts from local vendors have been a part of the raffle in the past. If you know of anyone who would be willing to donate any items to the raffle contact Maddie Thomas at methomas@bu.edu.

We look forward to seeing you on March 17th!

As the summer has officially winded down our ladies have been busy recruiting new members and volunteering in the community.

Back on September 9th the returning members got super spirited and helped recruit new Terriers with their flashy signs and stylish swim suit apparel. They must of done a great job as our team has a seen huge growth in size in the first few weeks!

In addition to being spirited, on September 17th our entire team, new and old members, got together super early and helped volunteer at the annual Hub on Wheels bike race that happens throughout the entire city of Boston. The girls passed out fruit, water and apple juice to the racers while also being positive reinforcement for the riders as they continued on the course.

In the next coming weeks our team hopes to continue to hone our craft of water polo and get our butts in shape to eventually participate in some scrimmages. Stay tuned for more information! 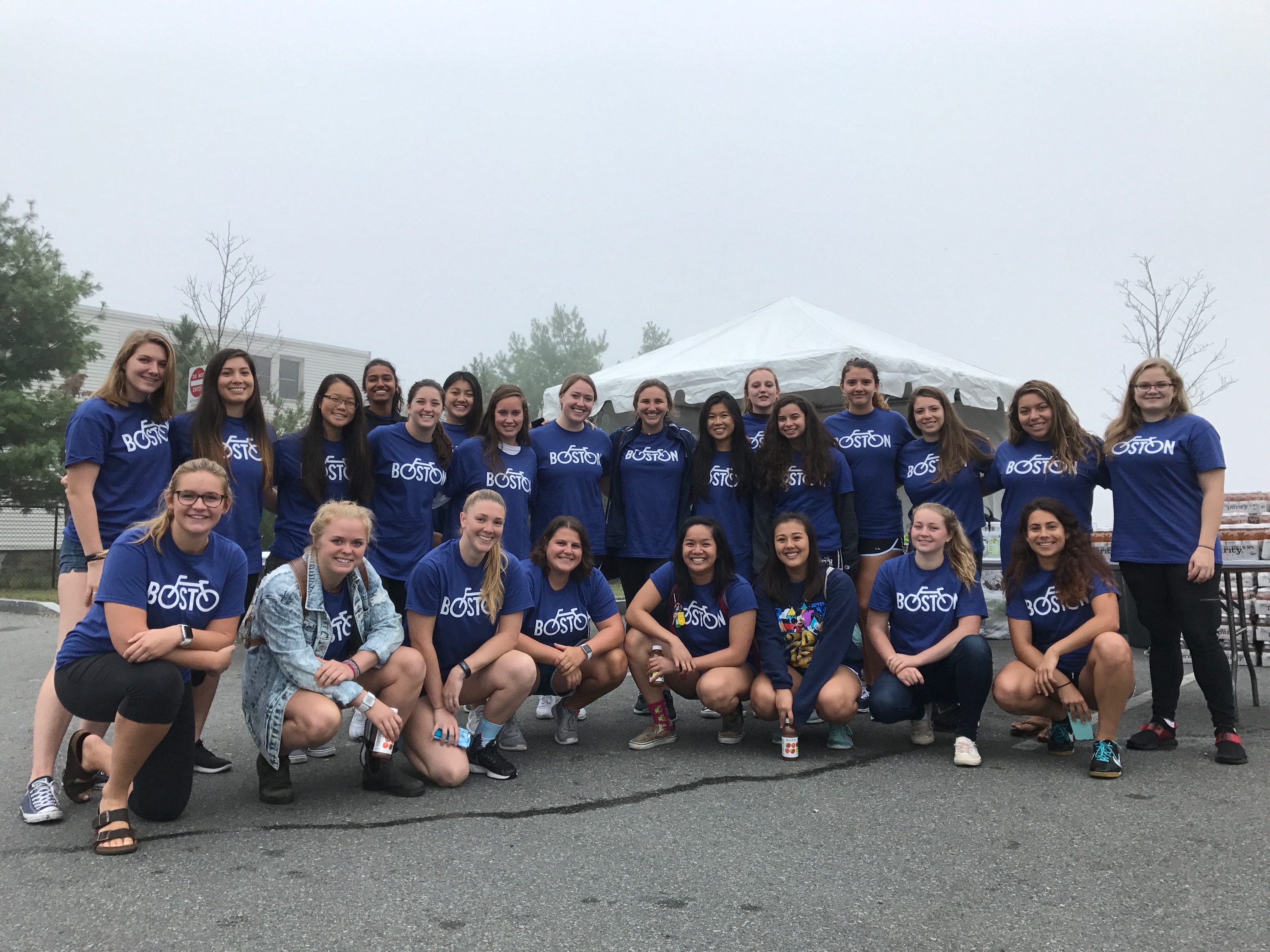