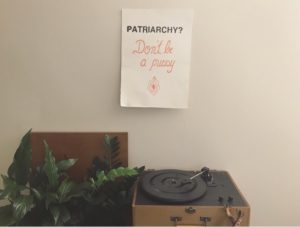 Every Hollywood abuser outed has their own special punch in the gut sensation, but Louie C.K. is one that pained me with a little extra oomph. As a supposed feminist, how could I have been watching everything he’s been putting out for years while somehow missing that he’s a complete scumbag? Can hypocritical assholes imitate good feminists that convincingly? I’ve used this as an opportunity to think about what warning signs slipped on by.

Louie’s feminism takes a familial note. I can recall Louie winning celebrity jeopardy in the name of a charity for women injured in childbirth, and the time that Louie endorsed Hillary Clinton because she is a mother. His daughters are his stated motivation behind almost every positive thing he does. “Women” in the more general, he sees in a semi-angelic light. In a well known bit, he compares the leap of faith a woman has in going on a date with a man as insanity . Men are lower creatures. They are closer to the animal kingdom. Louie isolates intrusive sexual urges as male.

I am not going to attempt to connect Louie’s picture of the world to reality, or assess its accuracy or inaccuracy. I’m merely going to trust that his signature “raw” style of standup does actually reflect the tone of his inner attitudes on gender. There have been comedy bits done by every genius and every hack on “the difference between men and women” for years, but Louie’s specific tone of moral dichotomy is unique and permeating throughout his career.

The plot of his movie that barely escaped release, “I Love You, Daddy”, centers around a man (played by C.K.) who admires a Woody Allen-esque filmmaker and subsequently dismisses his reputation as an abuser and manipulator of young girls. That is, until his own daughter is the girl involved. Fathers having some sort of moral compulsion to guard a young woman’s sexual behavior is a recurrent trope that goes back to images of self righteous dads intimidating potential boyfriends with shotguns. I Love You, Daddy is different from these typical cases of fatherly overreach, where the dad believing that he has a say is a much more simple case of patriarchal control of households and a moral view of looking at women’s sexuality. The filmmaker is an abuser of minors, but then again, Louie’s character is dismissive of abusers, and also reportedly shown miming masturbation in front of a room of people (eerily similar to CK’s actual behavior with women).

The idea that women can be tugged around by protectors and violators like little rag-dolls is fairly typical Louie C.K. material, perpetuating the image he builds where women are defined by familial connections and by a lack of the chaotic urges that lead men astray. Men’s feelings and actions are the ones focused on, even if women are pivotal to the story. This treatment may make men the bad guys and show women in a positive light, sure. But, it’s dehumanizing, and it’s dismissive of predatory behavior in men, by including it in a universalized picture, and therefore implying that at least the motivations behind it are unavoidable.

An illustration of this concept sticks out in my memory, from the TV show Louie. It is a scene in which Louie is rejected by his romantic interest and proceeds by attempting to rape her. She wrestles him off of her, and chides that he can’t even rape correctly. The scene isn’t strictly comedic, and instead veers into the drama that mixes with the humor of the show. It also wasn’t very realistic, though I have no idea if it was supposed to feel real in any way. The scene very clearly came from a male perspective, where the viewer was intended to feel the swell of Louie’s emotions, and the woman’s lack of a reaction was secondary.

In Louie’s world, him being an abuser doesn’t really make him a particularly bad guy, even though he’s harmful. In his world, all men are driven by similar urges. He is one of a scummy pack, and all he can do is try to devote himself to a fatherly role, trying to save the ones he has an emotional obligation to save, from this lopsided world.

Women who aren’t his daughters aren’t really rewarded the same courtesy. It may be that in order to feel an incentive towards respecting women, he feels the need to see them as more little girls under his wing. This would explain the highly criticized part of his shoddy apology, where he overemphasizes how much 5 the women he abused had “admired” him.

Additionally, though Louie claims to care about “women” in terms of this wide group of inherently superior individuals, he still thinks of his needs and feelings and urges first in all exchanges with them, and assumes them to be a form of “other” while the flawed male is the default. One can observe this while listening to his comedy, that the male perspective is the one that we are invited to occupy as the audience. Louie is a man, so some might think it is a given. However, I think that’s a bit of a lazy way out when it comes to art. And, make no mistake, Louie C.K. believes himself to be an artist. Consider the rape scene on Louie. The woman was a developed character, but when a man near her was having intense emotions, his were the ones that superseded hers. If in other cases she was granted the opportunity to be fleshed out, then this sudden laziness without a joke to balance it doesn’t really seem artistically defensible.

In the future, I hope feminism is held to a higher standard. Even if he had never shown anybody his penis, the picture he creates of a world where the current patriarchal system of oppression is a byproduct of inherent psychological urges isn’t compatible with an agenda of social change, which is what any form of pragmatic feminism should include.

I’m concerned by the fact that I never unpacked these objections until it was too late. Maybe I was distracted by the positivity, the flattery of his portrait of women. Maybe I excused it as a joke, not seeing the underlying attitudes that Louie was espousing, and that his hordes of male fans relate to. I don’t know how many of them use the same excuses to themselves that Louie did, considering their morality to be biologically handicapped, but it’s about time that we stop spouting gender pseudoscience to each other veiled and packaged in the form of jokes, or “art”.

Some men say that feminists are overly sensitive, and can’t take a joke. I don’t know what kind of laugh they expect from me half the time, maybe some sort of existentialist reaction where I laugh at the mundanity of hearing the same jokes over and over again, accompanied by the claim that men are better at thinking of jokes than women. Have I heard a man think up an original sexist joke? Maybe Louie C.K. did, and it slipped past me, and I think I laughed. Personally, I thought Louie C.K. was funny, at least most of the time, but this is a prime example of a joke not being funny anymore. When I was a little kid, I thought Bill Cosby was funny. When I was a teenager, I used to laugh along to Joss Whedon’s dialogue in Buffy the Vampire Slayer. I laughed at Dustin Hoffman in Tootsie, and Wag the Dog. I don’t think I’m going to be laughing anymore, and if you’re a man reading this article who wants to tell me that I have no sense of humor, then nobody’s stopping you.

Here is a definition of Street Harassment, courtesy of StopStreetHarassment.org:

Unwelcome words and actions by unknown persons in public places which are motivated by gender and invade a person’s physical and emotional space in a disrespectful, creepy, startling, scary, or insulting way.

There are various definitions of street harassment, but all of them specify that street harassment occurs in public, between people who do not know each other, and is a physical or emotional intrusion.  The harasser usually makes reference to the victim’s appearance or gender.

Why this term it is relevant:

According to a nationally-representative poll,

Street harassment is not a compliment.  It is, in fact, harassment, and should be treated as such.  Let’s lower the numbers!

See Hollaback, The Everyday Sexism Project, and Can I Get a Smile? to start.

Sick of street harassment in her neighborhood, Tatayana Fazlalizadeh has been plastering an important message around the city of Brooklyn:  Stop harassing women on the streets.  We don’t want it.  It is offensive.  We are not obligated to give men our time or attention

Some men, of course, still don’t believe street harassment is an issue.

Anthony Williams, a featured interviewee, believes street harassment is what he is “supposed” to do.  It is his right to try to “acquire” an attractive woman he sees.  He can say what he pleases to her in hopes of her reciprocation.

These are the men Tatayana Fazlalizadeh is targeting with her socially conscious art.

Interestingly though, one of the most upvoted comments on this article, by a man, asserts that all men are not like Anthony Williams.  But Tatayana isn’t targeting the “good guys” out there.  So why is such a comment relevant?

Of course, not all men think they are supposed to harass women about their appearances.  And not all men believe women are objects to be acquired.

To those men who wouldn’t think of partaking in street harassment, we sincerely appreciate it.  We are glad that you are disgusted that others of your gender would be so inconsiderate and offensive. But this article isn’t directed at you.

Men shouldn’t feel the need to rally in defense of their gender when issues such as street harassment arise.  Those who do so make this mistake are diverting attention from the issue at hand.

It is easy to dismiss a social concern by claiming that it isn’t ubiquitous enough to merit the attention of the general population.  But the facts are that street harassment is incredibly prevalent all over the world.

So no, not ALL men harass women on the street, but a great many do.  Progress occurs when the “good guys” stop worrying about defending themselves and commit to reprimanding the guy who shouts “nice tits” at a girl walking down the street.