Iran is a country with a long history of delicious food . These dishes are also famous in different countries and are served in many restaurants outside of Iran. Here are some of the most popular and popular foods among Iranians and even other nations. Where to go.

Related Articles
Iran launches first international halal food brand
Kurdistan tablecloth; Sanandaj indigenous food festival
A trip to Iran leads to some delicious food. Other delicious foods such as caviar, pickles, and fish are among the tasty barbecues and lambs, samboose, falafel and sour shrimp in the south as well as varieties of filets, watermelons and ice-cream flavors throughout the country .

Looking at Iran’s geographical location, you will easily understand why there are so many varied foods in this country. Once a center of Persian empire, Iran is in the neighborhood of the former Soviet Union and countries such as Afghanistan , Pakistan And Turkey . It is also located in the Middle East and close to Europe. It is far from Africa and there is also the Silk Road .

In the fourth century, Alexander the Greek king invaded Iran and conquered it. Since then, Turks, Mongols, and Arabs have also launched attacks on Iran. The Iranians have had a variety of delicious foods before the attacks, and other nation-wide foods have been added to their menu since then. Take, for example, the cut (Russian vegetable broth) served with green coriander, coriander, and Chinese yarn with bean soup, various herbs, and herbs .

Many different types of foods and fruits such as pistachio, almond, walnut, saffron, mint, pomegranate and grape have Iranian roots . There are four different seasons in Iran and, unlike other parts of the Middle East that are restricted by hot and dry climates, groundwater and melted snow have become oases in Iran for a long time. Different types of plants and fruits are grown .

Various types of Iranian food are served at American restaurants, where we come across 6 very popular dishes 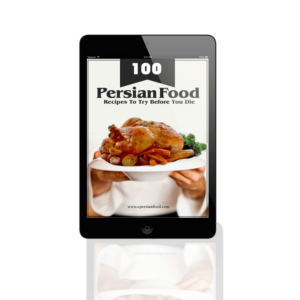 Kebab is more diverse than you think in Iran. The first is roasted mince with chopped onion, salt and pepper . It sounds simple but it tastes great. Leaf kebabs are another type of kebab made from lamb or beef slices that are added to saffron and butter for flavor in lemon juice and onions. The roast chicken, called chickens, is made from roasting whole chicken with all bones (of course, in American restaurants, chicken breast is used to make chicken) and is cooked to taste in lemon juice and onions. Saffron and butter cover. If you are lucky you can eat liver too. Liver is a roasted lamb liver served with fresh basil and lemon .

Plow rice is a type of rice that different fruits and nuts shine on like jewelry. It is a sweet and savory food that uses a variety of Iranian nuts and fruits such as pistachios, almonds , sweet orange peel, barberry, carrots and saffron. The Plow Plate is used for special events. Especially the use of this sweet meal at weddings is a sign of the future sweet life for the bride and groom. Polo rice is traditionally served with chicken as opposed to rice pastry.

The bottom line is the spirit of Iranian food and cuisine. It is a crisp, golden layer of rice that forms the bottom of the rice cooker. It tastes like a mixture of popcorn and potato chips with basmati rice. (Usually the bottom of the menu is not on the menu and you should ask for it separately.) At Iranian parties, there is always a little food but the dish that is always empty is the bottom. Teeth digger is considered a food addict and you can eat it by hand .

The soup is full of strings, beans, vegetables, green leaves like spinach and beet leaves. On this soup is full of hot mint, its crunchy fried onions . Sour cream is a popular Middle Eastern food that tastes like sour yogurt. The strings that come from China to Iran represent different, long parts of life, which is why when one goes on a long journey, Ash strings are cooked for him. There is also food that is cooked in Nowruz – the New Year of Iranians .

Made from vegetables, red beans and lamb, it is sour and full of vegetables. Cooked vegetables are flavored with dried lemons, which are called Omani lemons. These lemons are sour and with a bitter and sweet taste, they give a different flavor to the vegetable. Fenugreek is another vegetable used in the herb that is not familiar to Americans. Other vegetables used in vegetable cuttings include parsley, coriander and onion .

The Iranian people love sour flavors. Cranberries and reds are very sour. The traditional rice bowl is full of rice covered with barberry. This rice is cooked with butter, which helps to make the barberry softer. Yeah, rhubarb, tomatoes, sour oranges, lemons, lemons, sour cherries, stews, sumac and pomegranates are foods used in Iranian foods that give them a special and delicious taste.

In Iranian cuisine, rice can be cooked with butter and saffron, which is called celery, and can also be cooked with other cooked vegetables called polo. Polo can be a staple of plants, vegetables, beans, nuts, dried fruits, meat and even cooked strings. The best time to cook spring fennel is that young fennel and dill are fresh this season. This dish is full of dill and beans and is usually served with thin slices of lamb. And even served with bone-in lamb meat. Rice should have a saffron flavor with the saffron added to it just before serving .

8- Eggplant (Eggplant with slices of tomato)

This dish is made with turmeric roasted tomatoes in red and gold. The top surface of the tomato is covered with oil. This oil is a positive thing in Iranian cuisine and indicates that the food is cooked enough. Slightly tasty, this dish is served with tomatoes, lemon syrup and sometimes Ghori syrup alongside previously fried eggplants, golden and brown in color and cooked with onions and lamb. As with all Iranian dishes, eggplant slices are thick in this dish and should be eaten with rice using a fork .

Fusanjan is a traditional food among Iranians, made from sour pomegranate seeds with chicken or duck meat, and is definitely on the menu for weddings. Walnuts, pomegranate paste and onions are gently stirred together to produce a thick sauce. Sometimes saffron, cinnamon, or a little sugar are added to reduce pickles. The cup has a long root. Archaeologists have found in the remains of Persepolis, the ancient capital of the Persian Empire, inscriptions dating back to 5 BC containing a list of Iranian foods. The list includes walnuts, poultry and pork and pomegranates, which are the main ingredients for cooking a cup .

No Iranian food is complete without eating vegetables. This vegetable plate can include mint, tarragon, basil and coriander along with onion, radish, walnut, cheese and Iranian bread. Easily take a piece of bread, place cheese and vegetables on it, then fold it like a sandwich. This plate of vegetables is placed on the table and people eat it between their meals. Fresh and clean sisages are used every day in Iran. There is also a special New Year’s Eve menu for Iranian New Year, including various foods including vegetables such as vegetable pilaf, vegetable omelette and vegetable dish.