With kickoff less than one day away, the whole world is gripped by World Cup fever. Questions abound. Will Russia be able to organize a successful tournament? How will the teams handle the long distance between venues?   Will the World Cup be the same without Italy and the Netherlands? Without the USA? But most important of all, who will raise the trophy on July 15?

Of course, today it is not enough to simply name an expected winner. You want a probabilistic forecast that assigns to each team a probability of winning the whole thing. Many of the predictions described above are based on a simple structure: assign to each team a rating, based on some combination of historical results, quality of the players on the squad, quality of the club teams represented on the squad, and maybe other factors (home field advantage, home continent advantage, age of the players, distance traveled, or other personal hunches); then, use a mathematical formula to transform the ratings into a probability that a match ends with a given outcome (1-0, 2-1, 7-1, …); and finally simulate these matches many times to obtain predicted probabilities of the final tournament outcomes.

But what if we didn’t know anything about international football? What if we didn’t know about Messi and Ronaldo, that Neymar is coming off an injury, the Spain sacked its coach on the eve of their World Cup debut, that an England goalkeeper will find a way to embarrass himself, or that football is a game played by 22 players and in the end Germany wins? Could we still make an accurate World Cup prediction? What if we really tried to apply economic theory to predict the World Cup winner?

Welcome then to the Economic Model for predicting the World Cup. The model is extremely simple. It is based on the observation that a country’s soccer prowess can be predicted by just a few variables: population, GDP per capita, and the FIFA confederation to which a country is affiliated. The logic is quite straightforward: the larger a country’s population, the deeper its talent pool; higher GDP per capita means better facilities, infrastructure, health, and the ability to pay good coaches (contrary to popular belief, the best soccer players didn’t hone their skills by playing with a ball of rags on the street, with jumpers for goalposts: they played in organized leagues, with goals, uniforms, referees, and shouting parents on the sidelines); finally including a country’s confederation in the model is a simple way to capture the fact the passion for soccer is not the same everywhere. One could of course add additional variables (a country’s age distribution, measures of health, investment in sports as a share of GDP), but it is instructive to see how far this simple model can go.

Below is a figure showing the economic model’s prediction for the group stage. For comparison, the figure also shows the probabilities based on a more traditional rating system that takes only historical results into account. 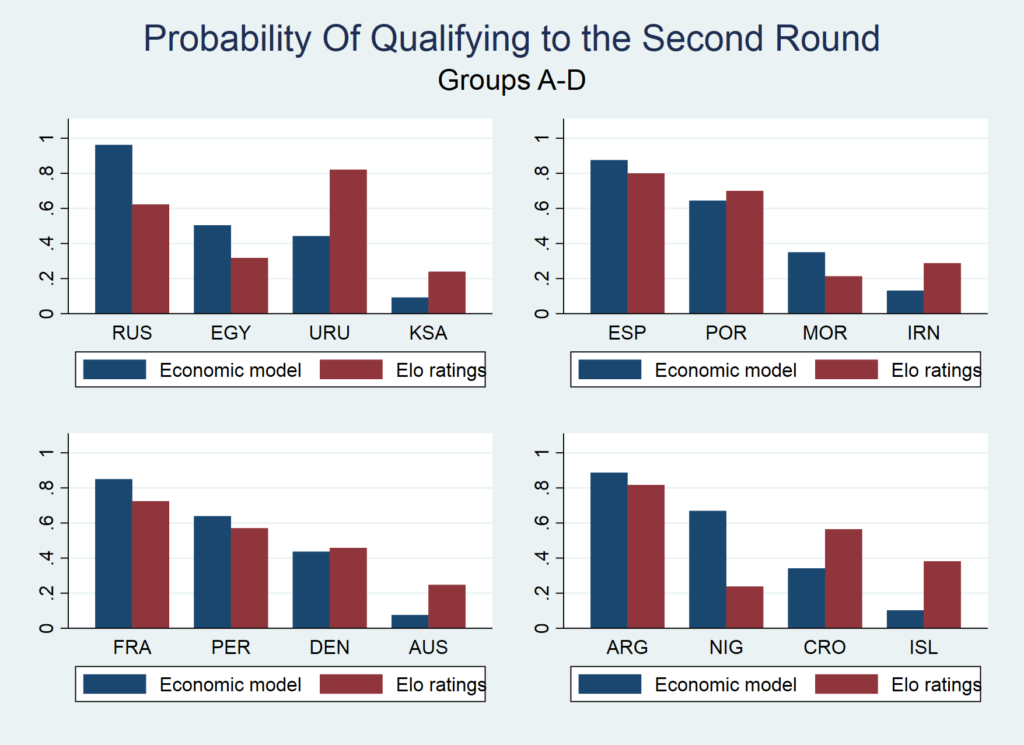 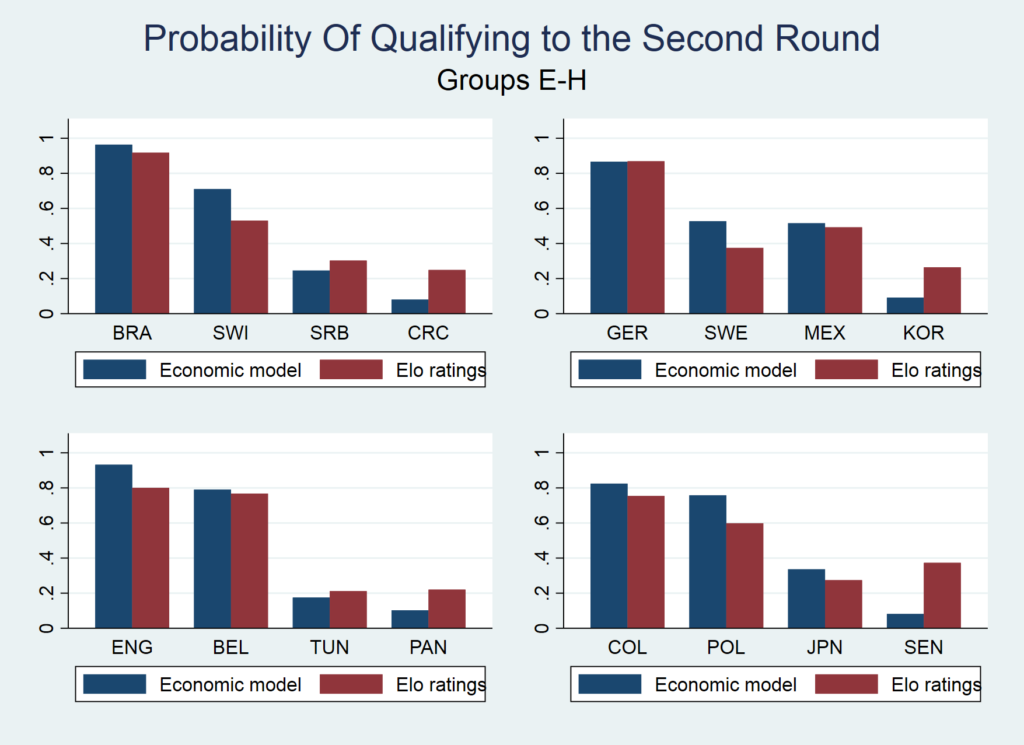 For many countries, the economic model’s predictions and the traditional predictions are remarkably similar.  The economic model recognizes Germany’s economic might and Brazil’s large population and rates them as strong favorites to advance from their group. But there are also some interesting discrepancies. Russia, Egypt and Nigeria are expected to do quite well based on their economic fundamentals. On the other hand, the economic model doesn’t think much of tiny Uruguay and Iceland (given the effects of the financial crisis on the Icelandic economy, the feeling is probably mutual).

And what about the original question: who will win the World Cup? Looking just at the teams with more than a 2% probability of winning, we get the following:

There is only one way to find out. Watch the games and enjoy!

M. Daniele Paserman is a Professor of Economics at Boston University. The chances of his favorite team, Italy, winning the World Cup are exactly 0.0%.

Update: For those interested, here is the full table of probabilities of advancing to the different stages for all World Cup teams according to the economic model (calculated before the start of the tournament). 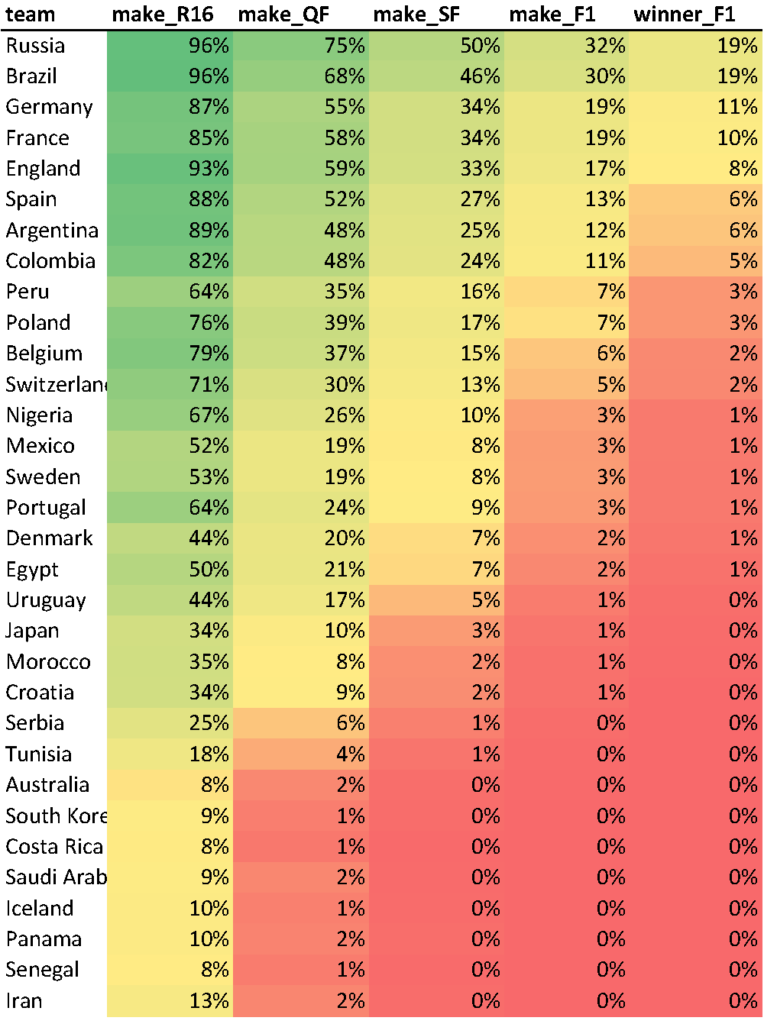 Additional update: some people have commented that including confederation effects is a bit artificial. Here is an alternative prediction that uses only population and GDP per capita to create team ratings. 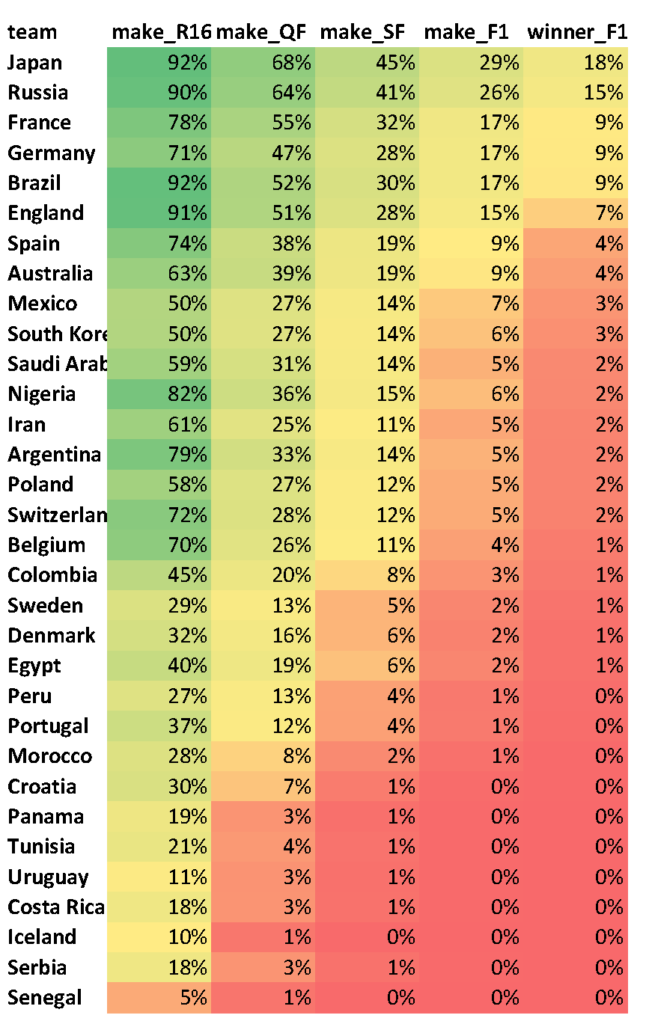 Japan! (Well, at least they haven’t lost to Mexico or tied with Iceland, so why not?)

I am a professor of economics at Boston University. I will use this blog to occasionally post some fun stuff. And sometimes some serious stuff. Enjoy!