This article began one night as I was working an event on my college campus, Boston University. I was bartending, and the event was for different companies to show off their newest inventions and innovations. The large attendance (mostly male), coupled with the open bar, meant that a police officer was put on duty to stand next to me and my co-worker as we served beer and wine to attendees. The police officer called to our side was a warm woman who had worked for BUPD for many years. She was a veteran to the Boston scene–on the BUPD force for over 15 years–and we got to talking. “Where do you live?” she asked me. “I live in Fenway,” I replied.

To know the Fenway area of Boston is to know the park that runs through it: The Back Bay Fens, colloquially known to Bostonites as “The Fens.” The Fens carry rich historical significance—from the Victory Gardens formed in 1942, to its beautiful walkways, marshlands, and reed species.  But the Fens also holds a darker secret, one that is underground, and dangerous: drugs, and public sex; all things illicit, have been reported in the Fens under the cloak of darkness.

The cop was quick to remind me of such darkness, and she told me not to walk through the Fens, especially at night.

I asked for examples regarding why … but she told me to just trust her, and wouldn’t give up any specifics regarding why the Fens were such a danger.

I left the event that night wondering: what did the police officer know about the Fens and its dangers?

Were the “rumors” about the Fens reality? … the high tales of the “Fen Men” … that drink and drug and have sex down by the Victory Gardens and the reeds?  And if they were: had the Fens always been this way?

Part I: Historical Beginnings of the Fens

In 1878, Frederick Olmstead, “the nation’s foremost park maker,”  faced a new project. Such a project had begun a few years before, when, according to an 1896 annual report by the Board of Commissioners of the Department of Parks, Boston officials, including Mayor Cobb, were looking for a public park that would be available within city limits. With the “appropriation of about half a million dollars,” and the newfound existence of a park commissioner, the land known as the Back Bay Fens was purchased, according to the Boston Landmarks Commission.

The problem was the park’s land. The hundred acres the city had bought was a Full basin; coupled with land and flats. And of course there was the salt marsh. In fact, the Fens was “originally designed as a tidal pool to drain the salt marsh that existed” (Boston Landmarks Commission, henceforth BLC, 1). If Olmstead was going to create a park, there would need to be a way to control the waters. The Muddy River needed a dam for its overflowing waters; and its “evil smelling swamp” (Ted Clarke, ‘Building of Boston’s Golden Age’).  Thus, Boston faced the issue of sanitary convenience when Frederick Olmstead was called in to create the Fens. 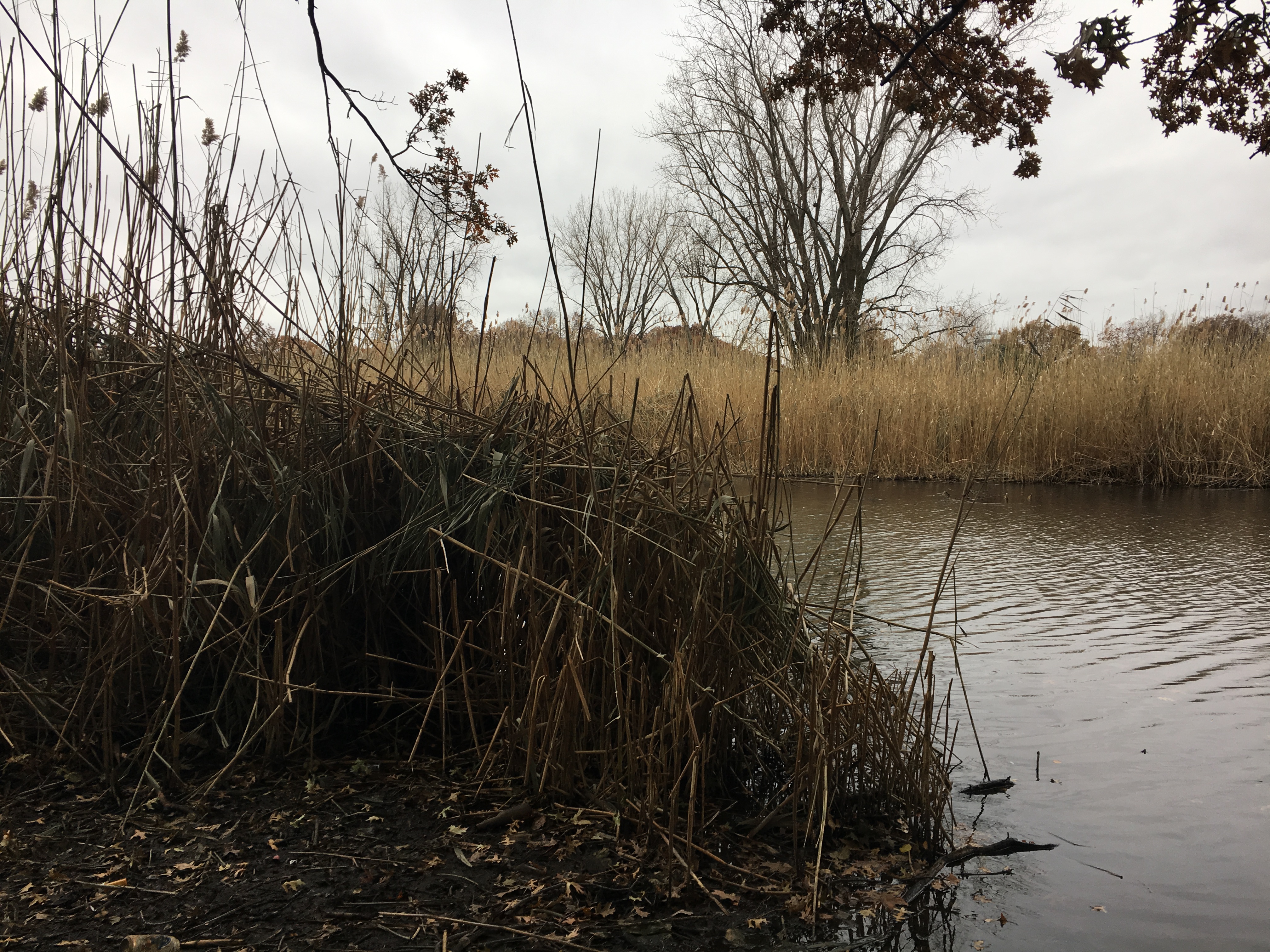 Olmstead was the son of a merchant, and as a young boy, the long walks he would take inspired his “deep respect for the land” (BLC 6). America, in the 1840’s still followed a “largely agrarian lifestyle,” which further fueled Olmstead’s wish for the “establishment of model farms of scientific agriculture and management [that] were in the national interest” (BLC 6). Olmstead’s drawing board for the Fens was a difficult one. He would need a way to make the Fens recreationally, aesthetically, and sanitarily attractive. Olmstead knew there would have to be a storage basin for the waters. He also knew there would have to be “bridges and other structures” which would “harmonize the park” for visitors (BLC 8).  Following a simple design, Olmsted designed the Fens as a “passive park made of walkways and bridle grounds” (BLC 9). A Muddy River conduit into the Charles helped alleviate saltwater. And Olmstead mastered the idea of simplicity in his parks: formal elements left to “edges of the park”; low bridges (like Agassiz Bridge) were further kept low to provide a full view of the park (BLC 9).

Once a seemingly insurmountable feat of plumbing and planning, the Fens went through many-a-changes in the years post-Olmstead. The beauty in the Fens lied in its multiple “ecosystems,” for lack of a better term, that it held. One ecosystem in particular, the Victory Gardens, showcased an elaborate history. In 1911, the lands that would one day be the Victory Gardens began “to be filled as a recreation field” (BLC 12). Nearly 30 years later, in 1942, President Roosevelt, to help with the World War II war effort, became “one of over 20 million victory gardens responsible for nearly half of all the vegetable produce during the war” (Fenway Victory Gardens.org). Victory gardens, popped up across the country because there was not enough food for both the boys overseas; and those at home. According to a historical sketch by the Massachusetts Historical Society,  “‘victory gardens’ sprang up in city lots and backyards in order to combat nationwide food shortages and wartime rationing” (Fenway Victory Gardens.org). 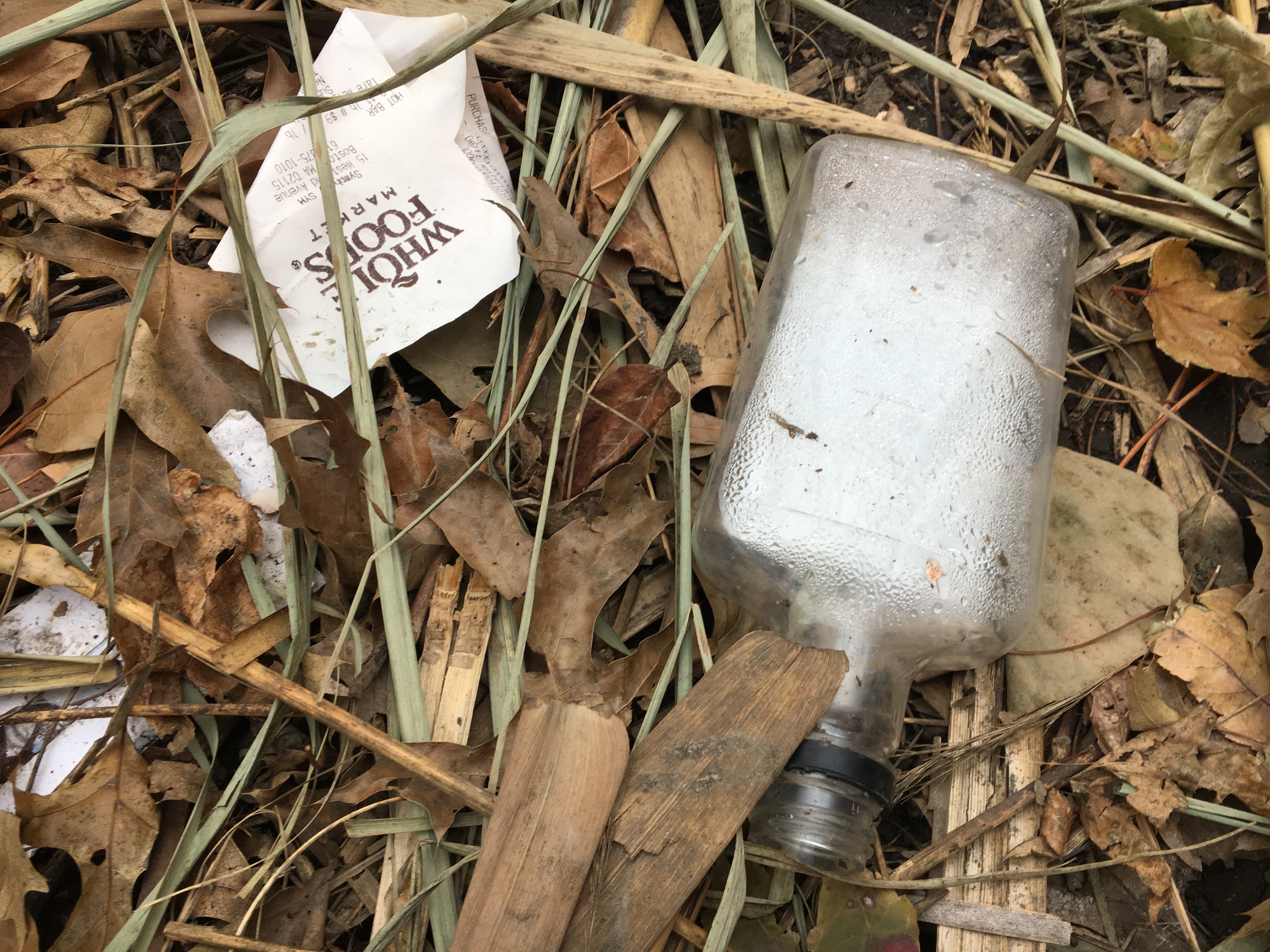 With the historical significance of the Fens, also comes an underground significance. Rumors swirl about the Fens, especially online; about its dangers, and weirdness, especially at nighttime. The victory gardens, a beautiful feat of “community intuition,” is also known as a location for homosexual sex and crime. Boston police advise, on their BPD blog, that “unless you are specifically invited in [the gardens] to admire them, stay out of them and stay on the main paths” (BPD News, Citizen Alert). Walk past the gardens, towards the Muddy River, and you are not unlikely to find  illicit activity worthy of BPD’s advice. According to an article published in the Fenway News, in September of 2009: “The Victory Gardens have been a meeting place for gay men for many decades, and from time to time complaints about the public sex and the detritus left behind has risen to a crescendo,” Stephen Brophy writes. “[With] widespread knowledge of the Gardens as a gay cruising site” (Fenway News, Stephen Brophy). Once a World War II propaganda effort, the Victory Gardens transformed, by 2009, into a location rumored–even by local Fenway news outlets–as a part of the park wherein illicit behavior occurs.

A video published by a Youtube account titled “Back Bay Fens park HALL OF SHAME,” uploads videos of the supposed ‘unkempt behavior’ in the Fens. One video, titled “The disgusting neglect of Victory Gardens and wildlife by Boston Parks and Recreation,” shows geese having  a stand-off with piles of trash left behind in the gardens. Another video, titled “Victory Garden is ruled by Thugs. No law enforcement,” underlies the ways in which the user feels the Park is neglected. The caption states: “Victory Gardens is plagued by smokers, junkies, drunks, homosexuals cruising for sex at night, homeless, drug dealers, you name it” (WATCH). Another article from the Boston Globe, also from 2009, similarly pronounces the issue of illict activity in the Fens, noting how the heavy police patrol in the Fens  specifically  targets homosexual sex in the Fens, “Some are concerned that the patrols may be targeting gay men, who often use the reeds as cover for their trysts”(Mass Resistance).

The police presence in the Fens is noticeable. Just last week, as I walked through the Fens with my friend Serena, we witnessed a police car pull over in the Fens. The cops–one male and female– walked for a significant amount of time around the area leading to the Victory Gardens and reeds. On another day, my friend Serena, Hannah, and I (safety!) saw a police car down by the Victory Gardens, on the opposite enclave hidden by the reeds, parked next to a gathering of people. 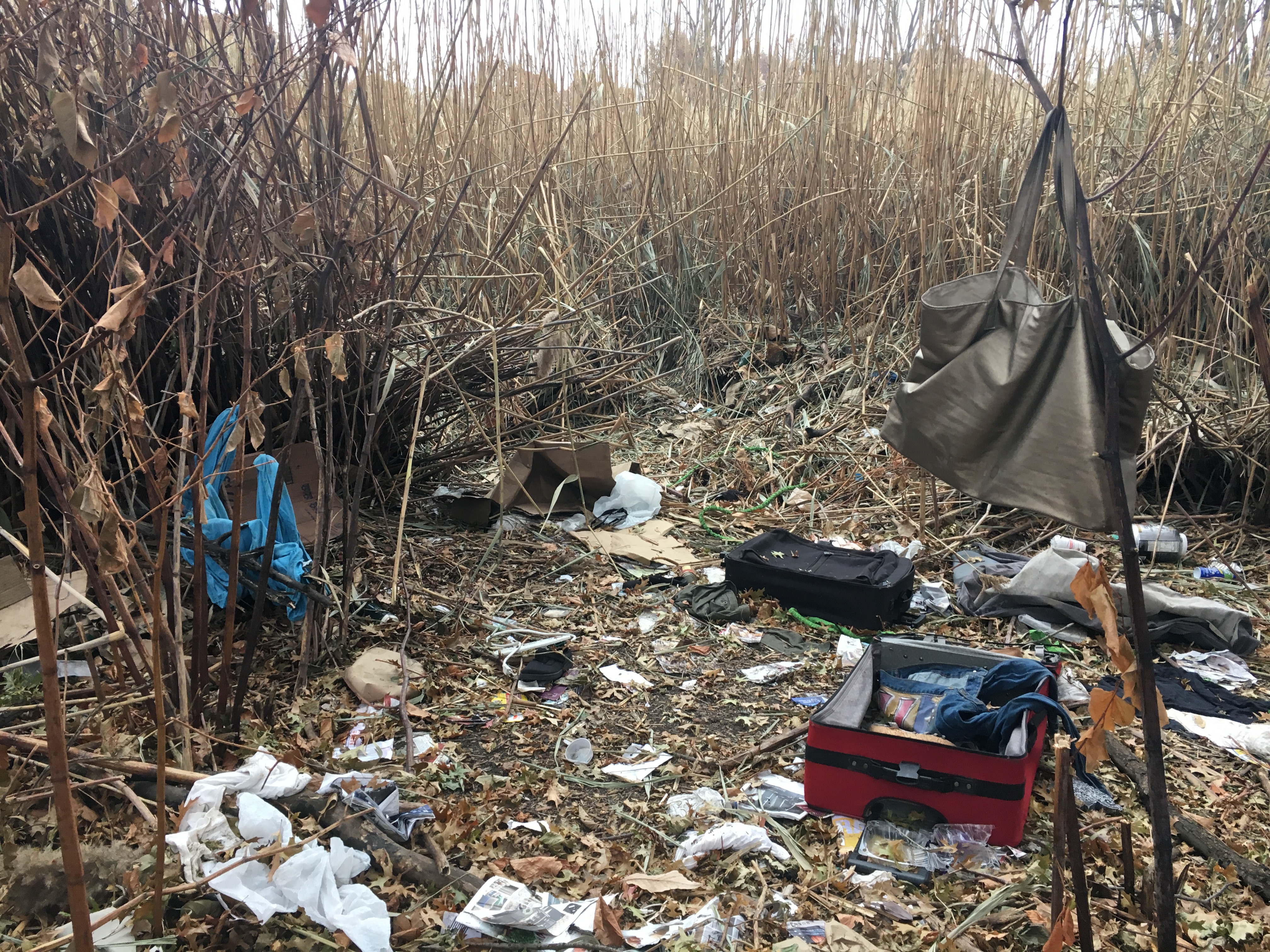 For weeks I went into the Fens almost every day, searching for an answer regarding the illicit activity that is so clearly prominent around the underlings of the internet, and local news. Even Yesterday, as I was walking around the Fens–among the reeds–I discovered what seemed to look like makeshift homes, or, at least makeshift beds. A purse dangled off of a tree, and trash, empty bottles and used blankets lined the ground. Even a single Nike shoe was left strewn on the ground, like it was someone’s room. 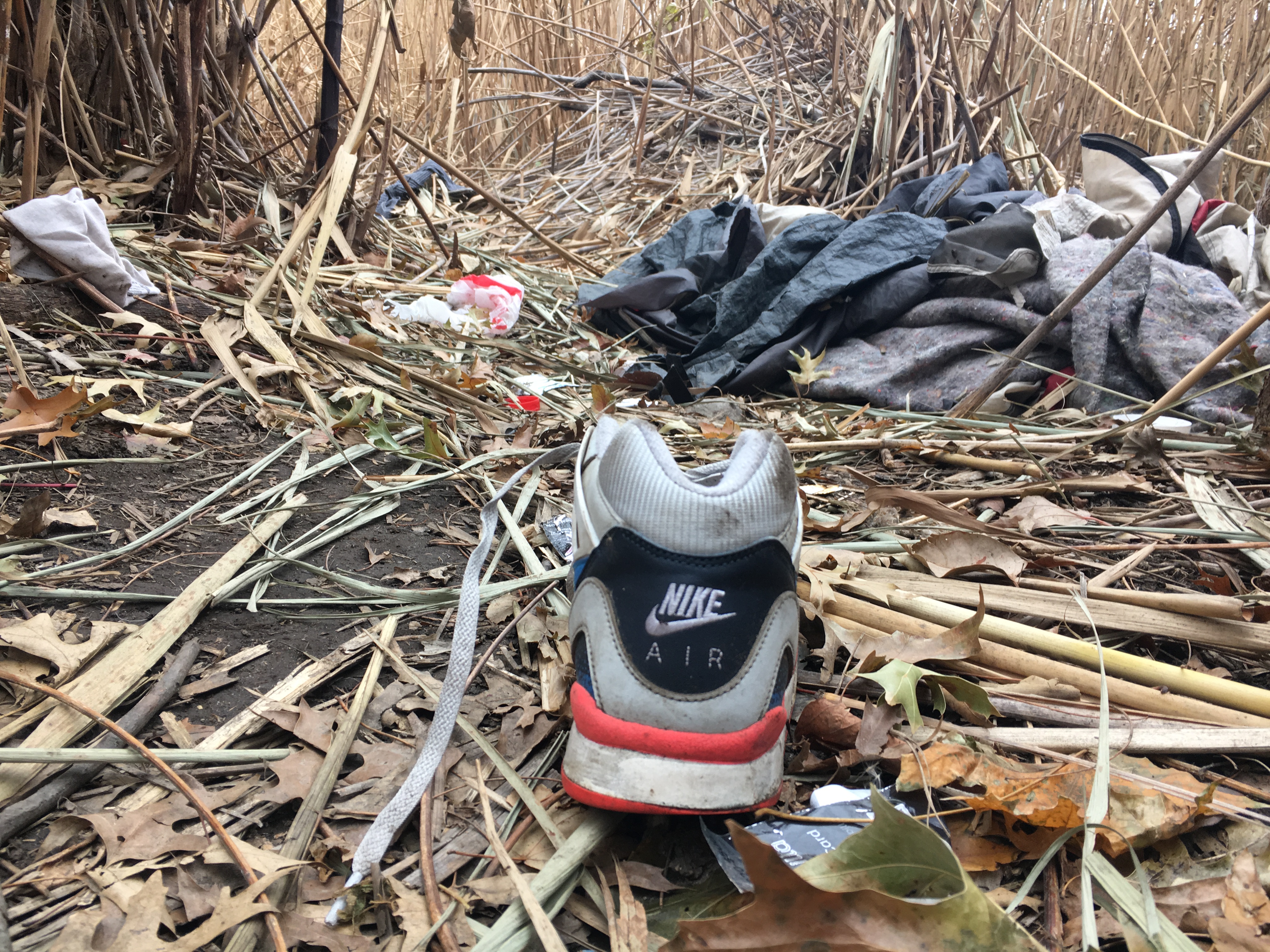 In reality, I didn’t find all of the illicit materials I was searching for in the Fens.  But, maybe such is a good thing (as much as I do like to throw privacy and safety matters into the wind). If anything, what I did find in the Fens, is much more literary than just another seedy park full of illicit activity. It seems that Olmstead’s 19th century view of a beautiful park never outstretched its unsanitary beginnings. In fact, it seems that the Fens and the gardens, in the modern day, still grapple with underground issues (then, salt marshes; today, illicit sex and drugs). From this point of view, the Fens provides an interesting look into– at the core of it–our humanity. That specific human desire to build acres of mismanaged land into a recreational park; to turn an alcove of reeds into a home. A Victory Garden by day, can be an illicit marketplace by night. To quote a favorite poem of mine, by Maggie Smith, which seems very fitting as an ode to the Fens, and its underground history:

“Life is short and the world

is at least half terrible, and for every kind

stranger, there is one who would break you,

though I keep this from my children. I am trying

to sell them the world. Any decent realtor,

walking you through a real shithole, chirps on

about good bones: This place could be beautiful,

right? You could make this place beautiful” (Smith, Poetry Foundation). 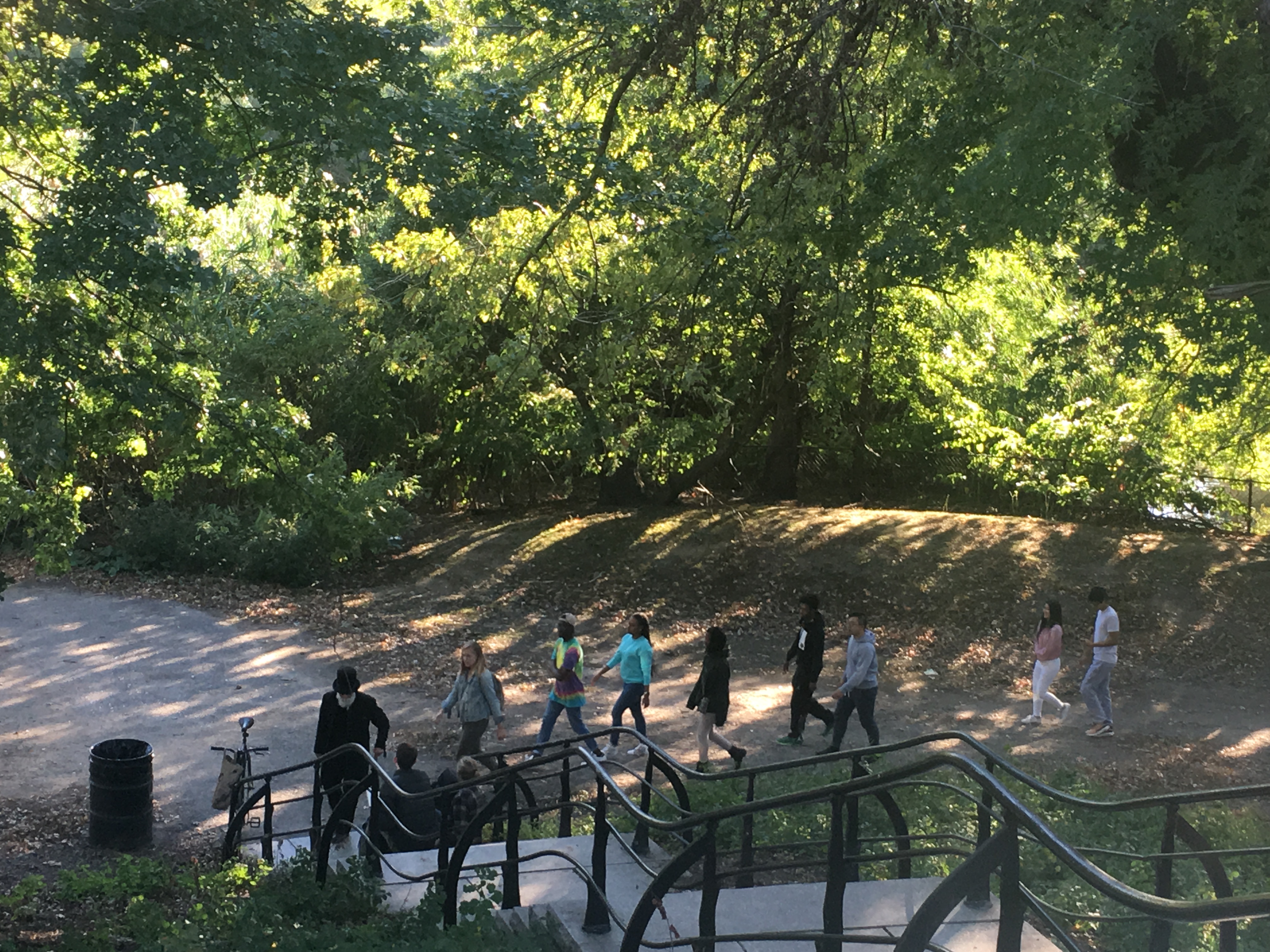