I was having dinner in a bar a few days  ago.  In Eastern Montana bars double as restaurants since most small towns cannot support both.   I always eat dinner sitting at the actual bar, not at a table, because the bar is a place where there is a chance to talk to other people.

I started chatting with a rancher who was there to have a few drinks.  He looked exactly like what central casting from a movie would have ordered.  He had a large white cowboy hat, a big bushy mustache, nice boots and a big laugh.

I bought him a beer since that is an easy way to keep a conversation going.  He told me about his life ranching and hunting.  He asked about me and my trip.  Hearing that I teach in a business school he was keen to explain the problems raising Angus beef, which is the specialty of that area.

The problem was that outsiders, with lots of money, like Silicon Valley and Wall Street tycoons were interested in buying large ranches as trophy properties.  He said they were willing to pay ten times the actual value.  This was boosting land prices and preventing future generations, like his children, from being able to go into ranching.  In this part of the world they call it shifting property from agricultural to recreational use.

He didn’t say this but if his complaint was true then the end result for beef eaters would be bad news.  Less property to raise cows would mean grass feed Angus beef prices in the future would go steadily upward.

I thought about his complaint for the next few days.  It made perfect sense from a theoretical perspective.  However, I had one small nagging issue.  I didn’t see any evidence of well-to-do outsiders.  On a bike you are very attuned to cars and trucks that pass you.  In the past week, I have not seen a single Mercedes, BMW, or Tesla.   The only planes at the airports I pass are small prop planes, not personal jets.  The bars don’t stock high end liquor for the occasional rich person.

I saw just one instance of the very rich.  Outside of Missoula, which is in Western Montana, not Eastern, I passed by a ranch that specialized in glamping, called Paws Up.  Glamping is glamour camping, which means you sleep in a luxury tent and have a high end experience.  Their website said rates were $800 a night per tent.  However, this ranch was catering to very rich outsides who only wanted to experience Montana’s great outdoors for a few days, with all the creature comforts that are possible.

Today, I had enough time to bring up some data to look into the rancher’s complaint.  The  US Department of Agriculture has been doing a survey since the late 1990s of cash rents.  The survey contacts about a quarter-of-a-million farmers and ranchers.  It asks them questions about the price it costs to rent land.  More details on the survey are found by clicking here.

Sure enough the price to rent land in Montana has increased a lot, just like my rancher friend stated.  In 1998 you could rent an acre of land for one year in Montana for about $22.  In 2017 the price was about $32.  You can see the full series in the next picture. 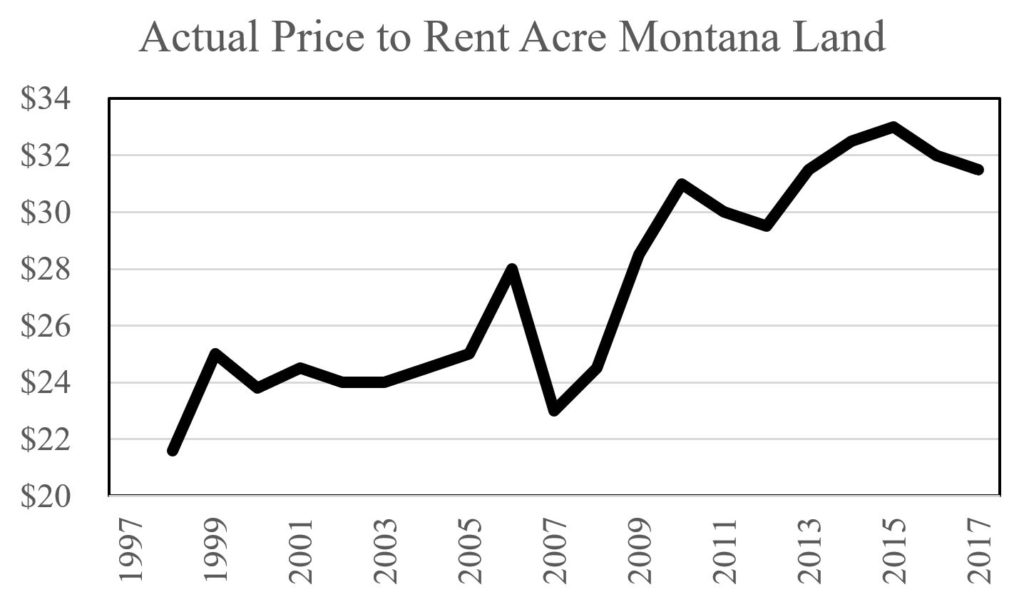 However, as I remind my students, unless you adjust for inflation long term comparisons are meaningless.  The next picture shows the inflation adjusted price, in 2017 terms. 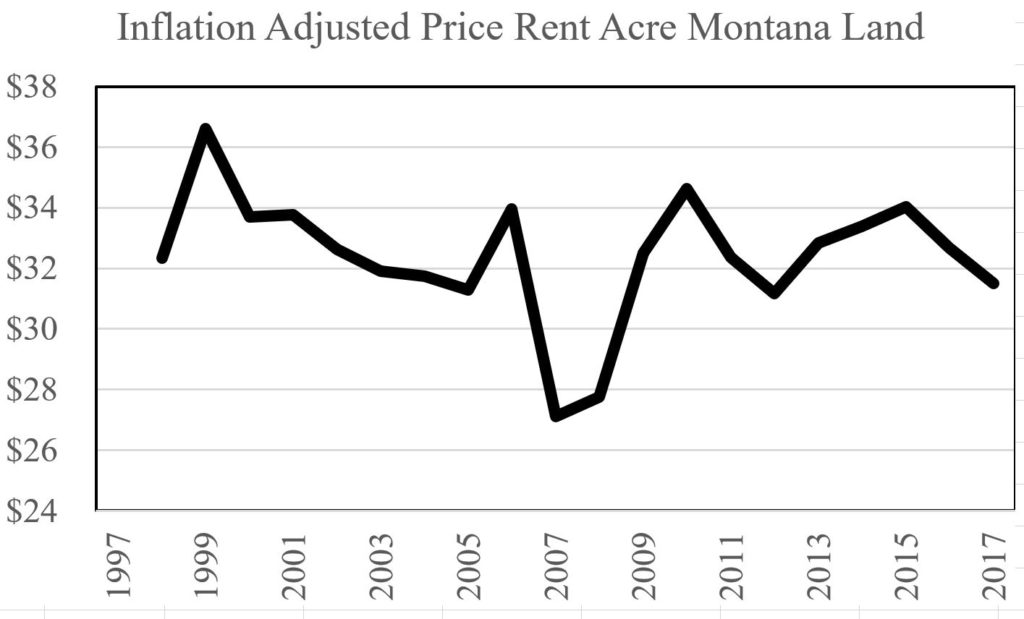 After adjusting for inflation the price to rent an acre of land for ranching or farming in Montana is about the same in 2017 as in 1998.

What does this mean?  Rich people might be converting agricultural land to recreational use.  However, not enough land is disappearing to push the price up over time.  We came blame Silicon Valley and Wall Street tycoons for many things.  One thing it doesn’t look like they are guilty of is making it tougher for a new generation of ranchers and farmers to get into the business in Montana.