I made it to Washington D.C. after 43 days, or about six weeks, on the road.  I pedaled approximately 3,000 miles in 38 days of biking and took 5 days off.  In the typical day of pedaling I covered about 80 miles.  I over-estimated my own abilities.  Before starting I expected the trip would take five weeks and when pedaling I would cover 100 miles a day on average.

During the six weeks I ate a lot of hamburgers.  My guess is that a burger was dinner about 20 times not counting the meals I had steak for variety. I drank gallons of Gatorade, but almost no beer or wine.  I stopped drinking alcohol a few days into the trip.  I found you cannot push your body to the limit each day and then toss down beers at night.  I did lose a bit of weight.  However, it was only six pounds.  At the end of an exhausting day the last thing I wanted to do was count calories.

What were the lessons I took away from the trip?  For those of you contemplating a long bike ride, pedal with someone.  Don’t pedal alone.  I had much more fun pedaling with my son from Ann Arbor, Michigan to Pittsburgh, Pennsylvania, pedaling with Beau in Wisconsin and pedaling with Greg from Pittsburgh to Washington D.C. than the days I spent by myself.  If you do decide to pedal alone, make sure you have amazing support.  My wife was phenomenal from cheering me up to getting me on a ferry boat that had already sold out all their tickets.

What other lessons did I learn?  I don’t want to sound trite but if you ask for help people across the USA in general will go out of their way for you.  After slashing and warping my rear wheel in Spokane, I was rescued by Roger and his pickup truck.  Then my bike was fixed only a few hours later by Randy.  When my son’s hydraulic bike brakes locked shut, bike shop Brad took care of us instantly and even told us where to get lunch.  When I was stranded and needed to travel down a few exits on the Interstate to get back on local roads there almost always was someone willing to give me a lift.

I also came away with a deep appreciation for the amazing productive capacity of the USA.  I spent weeks staring at giant fields of wheat, corn, soy beans and even kale.  I was passed by freight trains loaded with coal, oil, natural gas and other products that stretched almost forever.  While forever is an exaggeration, some of the trains were so long they needed four giant locomotive engines to pull all the cars.  I passed factories in the Midwest that were mind-boggling large. 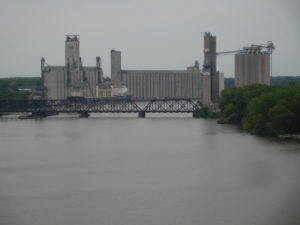 Not all was good.  I also came away with a realization that most of this country is empty of people.  In numerous places you could see that many people once lived there, but not anymore.  The eastern sides of the Cascades and the Rockies were both depressing to pedal through.  Towns are slowly dying as fewer people are needed in rural areas to run the farms and ranches.  The slow death spiral is disheartening as I pedaled through countless places that were once thriving, but today only have a post office that politicians are loath to shut down.

It was also clear that unemployment today is low, but income is definitely not high.  I pedaled past countless homes that were being lived in that needed repairs.  I was passed by numerous cars and trucks that were falling apart.  Low income and little choice in food seemed highly related.  I ate a lot of hamburgers, not because I love burgers but because many towns had little to no other choices for food.

I also noticed a huge concern over safety, security and personal property.  The most common sign I saw while pedaling was not “Stop” or even “Yield.”  Instead, it was “No Trespassing.”  Most of the signs were similar and looked like they were mass produced on only a couple of different assembly lines.  However, more than a few were unique, and every unique sign said roughly the same thing; “Trespassers will be shot.” 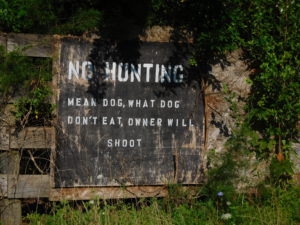 More than half the people I talked to on the trip warned me there were lots of “crazy people out there” and I needed to be careful.  I did meet a few crazies, but everyone was harmless and more eccentric than dangerous.  For example, in Ohio it took a while to extricate myself from a man who wanted to tell me every detail about the electric trains that used to run on the path I was about to pedal.

While many of you accept that TSA will scan your body at the airport and check your luggage, I was amazed that a large TSA team showed up to paw through my and all the other passengers’ luggage before taking a 4-hour ferry ride across Lake Michigan.

In closing I want to thank everyone who helped me out.  Many of you did small things that helped a great deal.  For example, Caleb in Montana suggested a hotel about 60 miles down the road.  This suggestion probably didn’t seem like much, but it prevented me from attempting an exceptionally long bike ride in blistering heat that might have ended badly.  I also want to thank those of you who sent public and private encouragements.  The messages of support meant a lot and helped keep me going.

Where and when is the next trip?  I don’t know yet since I have only been off the bike for a few hours and it will take some time to heal my saddle sores.  Wherever and whenever it is, I am sure it will be interesting since there are so many fascinating places, people and pursuits to see and try in the world. 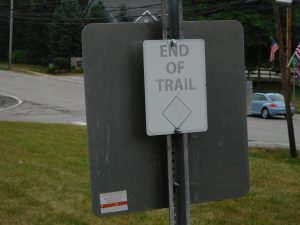 4 thoughts on “Final Thoughts on Pedaling Across the USA”