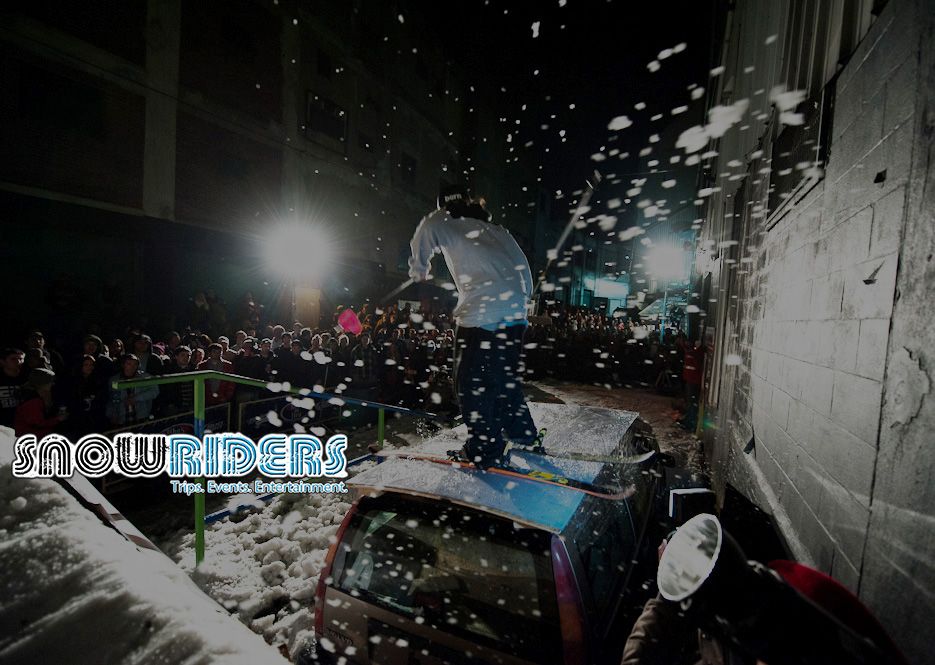 Have you ever wanted to watch some snowboarding while simultaneously looking at Fenway Park? Snowriders is here to make it happen.

If you haven’t heard of the Snowriders, you should definitely check them out – they’re three brothers who also happen to be BUST alum and really like us, which only happens when you were once one of us. So because they love snowboarding, and Boston, they’re bringing us a rail jam right in our back yard. Here’s the skinny:

WHAT: Snowriders Urban Sessions – Boston
WHEN: Saturday November 23 7pm-2am
WHERE: Who’s On First by Fenway
HOW: the event is 21+ (sorry kiddos), tickets are on sale now

So maybe you can watch some stellar riding and enjoy some beverages – but buy a ticket ahead of time and you get a free lift ticket to your choice of Killington, Okemo, Pico, or Sunapee (sounds a lot like our pass, huh?)…AND they’re giving away tons of free swag and chances to win some new gear – trust us, they always deliver.

You won’t want to miss this Winter Kickoff Party. And of course, you can find some of your fellow BUSTies there, so if you’re looking for someone to have a blast with, don’t be shy! 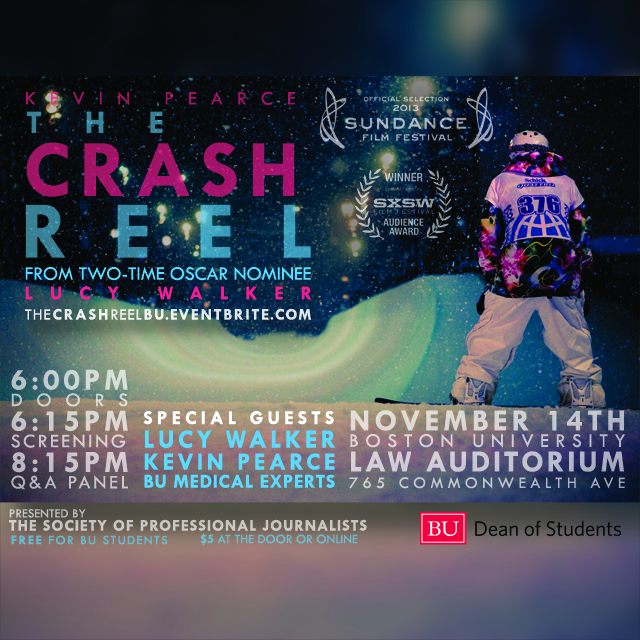 Wondering why Kevin Pearce and Lucy Walker are going to be at BU on Thursday? BUST is teaming up with HBO, Society of Professional Journalists, BU's really great brain research program, and a whole bunch of others for the screening of HBO's Crash Reel.

Directed by two-time Academy Award nominee Lucy Walker, this HBO documentary tells the story of an escalating rivalry between snowboarders Kevin Pearce and his nemesis Shaun White in the run-up to the 2010 Olympics that leaves Shaun on top of the Olympic podium and Kevin in a coma following a training accident in Park City, Utah. Kevin's tight-knit Vermont family flies to his side and helps him rebuild his life as a brain injury survivor. But when he insists he wants to return to the sport he still loves, his family intervenes with his eloquent brother David speaking for all of them when he says, “I just don’t want you to die.” Kevin’s doctors caution him that even a small blow to the head could be enough to kill him. Will Kevin defy them and insist on pursuing his passion? With his now impaired skills, what other options does he have? How much risk is too much?

Lucy Walker, Kevin Pearce, and Dan Daneshvar, a postdoctoral researcher in behavioral neuroscience at the BU School of Medicine, will be in attendance. They will hold a Q&A after the event fielding questions from the audience about the film, the experience, and BU's involvement in the strides that have been made in the Traumatic Brain Injury field.

It's getting chilly out, which means its time to suit up...

But are you worried your gear might be out of style? Or maybe you're worried because you don't have any gear at all? New Boots? Broke your board? We have an answer for everything: Boston's Annual Ski and Snowboard Expo!

Everything is super marked down East Coast Alpine is having a killer sale, not to mention plenty of other winter outfitters. And there's tons of free swag to go around.

When: Thursday November 14 - Sunday November 17; Check the website below for times.
Where: Seaport World Trade Center
200 Seaport Blvd
Boston, MA 02210
Tickets: $12 (there's a coupon on the website for $2 off) buy here: http://www.bewisports.com/expos/boston/
How: Get there with the T, take the green line to the red line to the Silver line. If you're coming from BU that goes a little something like this:

1. Green line to Park Street
2. Red Line to South Station
3. Silver Line to World Trade Center
4. Walk around for a while until you find it

Worried you're going to get lost? That's ok, because you probably will, it's kind of a hike. Fortunately, all of us BUSTies who have made the trek alone in years past are happy to guide you.

BUST will be taking a group trip on Friday November 15. We're leaving from Marsh Plaza at 5pm. Be there or...good luck.

For more information or to buy tickets (hint: there's a coupon on the website for $2 off a ticket!) click here. 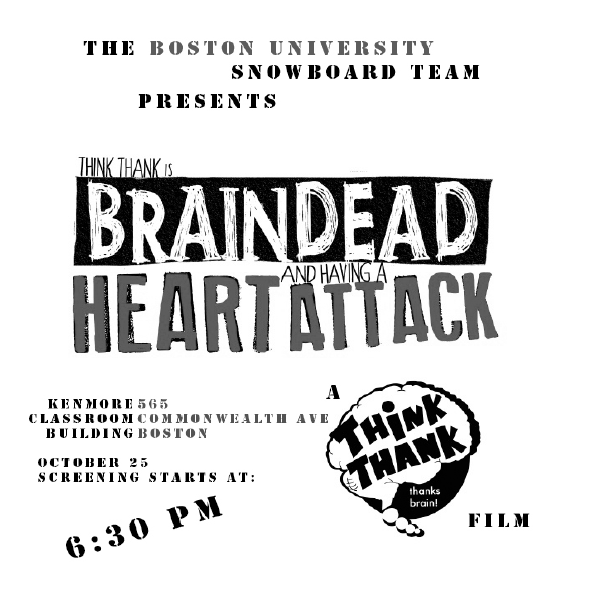 Come hang with us next week in the Kenmore Classroom Building at 565 Commonwealth Ave in Boston, we'll be showing the newest Think Thank movie: Brain Dead Heart Attack.

It's premiering this week, but we have the next best thing: a classroom auditorium filled with your favorite BUSTies and people off the street.

The moive starts at 6:30, but we'll be having a ball before then (but not before 6) so come get a good seat. And bring your friends, even if they don't go here.

And it's free so that's cool. Check out the trailer below!

"Think Thank is Brain Dead and Having a Heart Attack" Teaser from Snowboarder Magazine on Vimeo.

You still in Boston? I know some of you are! Ok, so there's a ton of stuff you should know about.

This week, Dew Tour tickets are going to be $12 with the promo code "Katie" ! Go to ticketmaster.com to purchase tickets (or just click on this link). This Friday and Saturday have the skateboarding events with SHAUN WHITE, Ryan Sheckler, PRod, and many more. Also, there's a free concert by the Neon Trees and Paper Tongues Thursday night at City Hall Plaza (near gov't center).

Following all the Dew Tour festivities, there is a huge party put on by our guys at BERN on Saturday night. Its at DJ's which is right near the garden and benefits Grind for Life, a charity that helps kids with cancer. $10 cover charge, 21+ Facebook Event Also, Monday (June 21) is International Go Skateboarding Day! Hurray! Orchard Skateshop is having an event at Ringer Park in Allston from 1-5pm. Check it out! They're bringing in ramps and there'll be plenty of shwag. I'll be there with the Dew Tour street team at 1pm. Facebook Event Tickets are on sale for the Dew Tour in Boston June 25-26. Some of the biggest names who will be there are Shaun White, Ryan Sheckler, Paul Rodriguez and Buckey Lasek!

The Dew Tour is a competitive skateboarding competition series that has 5 stops across the country. This year, the first stop is in Boston! The Boston stop will also serve as the International Skateboarding Federation’s World Skateboarding Championship. Besides the title of Dew Tour Champion and receiving the Dew Cup, there is $2.5 million available in prizes. This is the premiere tour for professional athletes. The competitions will be broadcast live on NBC Sports, and distributed on MTV, MTV2, USA Networks as well as other channels like Fuel TV. But you really want to be at the tour if you can. Besides the actual competition, there is a Festival Village with concerts, interactive booths and tents, demos, and opportunities to meet the athletes.

Get your tickets here. Use the discount code “Katie” for a variety of discounts. For further savings, contact me at katie AT traveloutloud DOT net for group discounts. We should get a group together from BUST!

The Action Zone is the best place to sit. Here are your perks:

Hey BUST,
The BU Entrepreneurial Club asked us to pass this along to you so here you go! Could be cool to see and also you can get some discounts on SnowRiders trips.

You can check out the preshow to see what the company is about at http://www.facebook.com/video/video.php?v=594624475675&ref=mf

We have an event coming this Thursday, April 8th! Come out and network, get some friendly entrepreneurial advice, grab drinks afterwards. The event starts at 6:45 at Photonics room 203. Can't make it? It'll be streaming online where you can ask watch and ask questions real time.

The company we will be featuring in the hot seat is SnowRiders, check them out at www.thesnowriders.com. They will be in the "hot seat" for a few minutes talking about their company, then a panel will give advice on how to make this company even more successful.

The founder of the company will be giving away some shirts and free 2 for 1 passes to a lucky few people.
ALSO anyone who comes will receive 10% off any ski and snowboard packages booked in the next year through their site!

Check out www.dartboston.com for more information, and www.pokinholes.dartboston.com to find the link for the stream. A pre-show will be up by the end of this weekend giving you a preview of Thursday's event and company.

Welcome back to Boston! We hope you had a stellar break. Let’s hang out this Tuesday, Jan. 12 at Barnes & Noble from 10am-7pm. We’re having a fundraiser for the team. Here’s what we’ll be doing: first of all, we’ll be on the floor where you pick up your preordered textbooks. We just meet people, look at a spreadsheet for a box number and then go in the back room and get the box and give it to the person. It’s super easy and last year we had fun chillin with each other. If you could give us a couple hours of your time, that would be fantastic.

Wear comfy shoes and clothes because we’ll be on our feet.

The Van Certification class is Tuesday Jan. 19 from 5-8pm at fitrec.  If you need to become certified to drive, please use this registration link www.bu.edu/fitrec/signup/van and follow the login for BU students/faculty and staff.  THIS IS ONLY FOR NEW DRIVERS. THIS IS THE ONLY CLASS OFFERED THIS SEMESTER. **Note** Drivers are welcome to take the course on their own at their own expense through the Massachusetts Safety Council if they absolutely cannot make this class.  The link to that site is http://www.masafetycouncil.org/defensive_driving.htm.

Just wanted to remind you that the Barnes and Nobles fundraiser is the day before classes start on Tuesday, Jan 12! Try to make it back for a couple hours to help us out. We don’t need you all day, but we’ll need people there all day.

Van Certification class is Tuesday, Jan. 19 from 5-8pm.  If you need to become certified to drive, please go to this website and sign up www.bu.edu/fitrec/signup/van.  THIS IS ONLY FOR NEW DRIVERS. THIS IS THE ONLY CLASS OFFERED THIS SEMESTER. Drivers are welcome to take the course on their own at their own expense through the Massachusetts Safety Council if they absolutely cannot make this class.  The link to that site is  http://www.masafetycouncil.org/defensive_driving.htm.

Our first meeting is Wednesday Jan. 13 at 9pm in CAS STO B50. Be there. We'll have probably have extra sign-ups for the first trip to Stratton.

We had our first competition the other day and Katie Moore came away with the gold x2 in Slalom. Congrats!