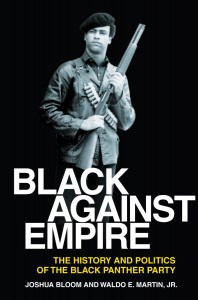 Bloom, Joshua, and Waldo E. Martin. Black against Empire: The History and Politics of the Black Panther Party. Berkeley: University of California Press, 2013.

The burgeoning field of Black Power studies has produced a wealth of innovative and sophisticated treatments of the activists, organizations, and ideas that emerged in the late-1960s offering new and radical visions of racial equality and social justice in the United States.  Much research about Black Power has sought to understand the influence of its driving personalities, to examine specific tactics or ideals of leading organizations, or to elucidate national shifts through studies of social and racial developments in specific locales.  The existing scholarship is rich and multi-faceted, but has only recently begun to unravel and make sense of some of the central paradoxes and contradictions that allowed the militancy and self-determination articulated by proponents of Black Power to capture the imagination of African Americans and other marginalized groups both domestically and internationally—and in doing so, to win the fear and respect of agents of white power all the way up to the FBI.  Among Black Power groups, the Black Panther Party for Self-Defense (BPP), founded in 1966 in Oakland, California, was the most violently suppressed, philosophically sophisticated, and glamorized and maligned by mainstream media.  Much written about the Party has been formulated in response to preconceptions and contemporary mythologies about the Panthers either as a violent gang of thugs or as laudable folk heroes willing to sacrifice themselves for the good of the people.  These tendencies in scholarship and memory have for decades complicated the process of devising a cohesive, national history of the Black Panther Party that effectively explains the periodization of its political and organizational development—an explanation necessary to comprehend the revolutionary potential and practical shortcomings of the Party as a legitimate and historically-contingent force for social change.

Black Against Empire: The History and Politics of the Black Panther Party (2013), co-authored by Joshua Bloom and Waldo E. Martin Jr., takes up this task, offering a riveting and thoughtful narrative of the Party’s formation and ideational evolution. Characterizing their own methodological approach as one of “strategic genealogy,” the authors contend that “what is unique and historically important about the Black Panther Party is specifically its politics” (9).  They therefore consider seriously the Black Panther Party as a political organization concerned with understanding, articulating, and remedying the economic, structural, and institutional forces that enriched and empowered the few at the expense of the masses.  Bloom and Martin skillfully expound the philosophical and ideological continuities and divergences of the Party’s shifting emphases, particularly from its founding tactics of armed self-defense and “policing the police” to its establishment of such lauded community programs as free breakfasts for school children, clothing and shoe giveaways, and screenings for sickle-cell-anemia.

This progression from guns to butter was not reformist or counterrevolutionary but instead a flexible and logical response to official efforts to thwart the Party’s growth and influence.  In the authors’ estimation, the unifying thread and the centerpiece of Panther political philosophy was a “nondogmatic, Marx-inflected anti-imperialis[t]” worldview—an incisive, timely critique of class and power in the United States.  Bloom and Martin posit that Panther politics was undergirded by a belief that black Americans and other disenfranchised and oppressed groups were, in effect, internal colonies of the United States and its “occupying army,” embodied most egregiously by abusive agents of local law enforcement.  The interracial, cross-cultural, and politically innovative alliances the Party forged were both possible and momentarily effective because the Panthers, and particularly Party co-founder and political philosopher Huey Newton, interpreted the world at the end of the 1960s in a way that made sense to a variety of suffering peoples who were, if not ripe for radicalization, sympathetic to the demands and tactics of militants in America’s streets.  According to Bloom and Martin, “The Panthers drew a line dividing the world in two.  They argued that the oppression of draft resisters by the National Guard was the same as oppression of blacks by the police and the same as the oppression of the Vietnamese by the marines” (393).  Examining the psychological effects of this “ghettoization” on individual and communal development, Black Against Empire deftly situates the daily (lowercase “p”) politics of survival in poor urban black communities within the context of the international (capital “P”) political struggles of subjugated nations and peoples against forces of global imperialism.  By this account, Panther politics acknowledged the international dimensions of systems defining the rights of people not only by their relation to state power but by the political dynamics governing nations’ relationships to each other as well.

In contrast to scholarship suggesting that the Black Power era, and the Black Panther Party in particular, was an aberration or departure from civil rights struggles of the 1950s and early 1960s—a sudden shift from liberal tactics to gain political concessions and citizenship rights to apolitical violence borne of frustration and impatience—Black Against Empire situates the Panthers’ anti-colonialist sentiments and anti-imperialist rhetoric within the long history of African American groups and movements “like the Nation of Islam, Garveyism, and varieties of worker- and union-based activism dating back to the nineteenth century” (196).  Among Black Power groups, the Black Panther Party rose to national prominence “because it was creative politically[,]…seiz[ing] the political imagination of a large constituency of young black people[,]….articulat[ing] this revolutionary movement…to a broader oppositional movement, [and] drawing allied support from more moderate blacks and opponents of the Vietnam War of every race” (400).  As this work proves, the Panthers were not insular and impulsive but instead largely collaborative and deliberate—qualities that inspired followers and created coalitions.  When the conditions maintaining this alliance of radicals dissipated with civil rights advances and the beginning of the end of the war, “the practices that had won the Panthers so much influence became futile” (400).  While some scholars have previously argued that Panther programs and principles were not as counterintuitive or contradictory as they first appear, none have done so more compellingly or definitively than Bloom and Martin.  Black Against Empire is essential reading for those looking to understand the rise and fall of movements for social change, for as Bloom and Martin solemnly conclude, “[n]o revolutionary movement of political significance will gain a foothold in the United States again until a group of revolutionaries” succeeds in “creating a broad insurgent alliance that is difficult to repress or appease.”  As social inequality and government inaction reach unprecedented extremes, the need to build coalitions is no less vital in the age of Obama than it was during the heyday of the Black Panthers.