Volunteers go out on our van on Thursday nights to East Boston to help distribute food, clothing, etc to our clients. In order to volunteer with OVP, you must be a BU graduate student (Med, GMS, SPH). If you are affiliated with BU and would like to help out, please email outreach@bu.edu. We will have a sign-up for the summer available in late May.

Here is how you can help:

Our mission is to fulfill the unmet needs of the medically underserved populations in the Greater Boston area, particularly with regard to health care and access to services, while providing an opportunity for students to learn skills in community outreach. 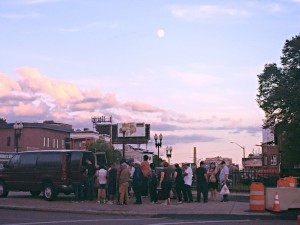 The Boston University Medical Center (BUMC) Outreach Van Project (OVP) was founded in January 1997 by several students at the Boston University Schools of Medicine and Public Health under the guidance of an advisory board and aid from several Boston University affiliated community agencies. The mission of the Project from its inception was to have a positive impact on the health and well being of the medically underserved populations in the Greater Boston area. Our three goals are:

These goals have continued to drive the Project’s daily activities. During the first year of operation, the students, faculty and members of the community involved with the Outreach Van Project achieved these goals through providing reliable and consistent services to the underserved populations of East Boston and the Suffolk Downs Racetrack.

We visited both sites every Thursday night. At the Racetrack we served the migrant worker population, many of whom are from Central America and Mexico, and have traveled to the Boston area for work. The Racetrack is home to about 300-450 migrant workers who live in on-site housing. They are uninsured and work seven days per week taking care of the horses for a low wage – often no more than $100 per week. They are additionally constrained by the fact that about 60% of the workers are Spanish speaking with very little grasp on the English language, and are therefore reluctant to seek medical assistance when needed. Substance abuse and mental health issues are rampant in this population.

In East Boston we primarily serve the homeless population. Many of our patients are from Central America, including countries like El Salvador, where some have witnessed war crimes and human rights abuses. As a result of their personal experiences, a number of our patients suffer from mental illness. Many exhibit erratic behavior and are unable to care for themselves effectively. Similar to the population at the Racetrack, the majority of our patients in East Boston are Spanish speaking.

In addition to the Racetrack and East Boston, the Project has brought increased awareness to the homeless population in Cambridge/Somerville. In May 1999, the Project extended its services to include a second night to help the homeless community in Cambridge/Somerville. We went to Cambridge every Wednesday evening. The population was predominantly composed of English-speaking homeless adults who were mostly Caucasian (~90%) men (~80 %). Adolescents comprised close to 25% of our encounters who have all been Caucasian with a majority (~70%) being male. At the time when we started many Outreach agencies were prevalent in Cambridge, but the BUMC Outreach Van Project was unique by being the only active evening outreach van service that provided on-site medical care. Our site in Harvard Square was particularly interesting because the visual presence of the Van invited a majority of the homeless population to approach us.

In the Spring of 2000, however, we were notified that CASPAR, a functioning outreach agency in Cambridge, received additional funding to provide for permanent evening aid to the homeless population in Cambridge. We therefore discontinued our services to Cambridge and focused our resources on the populations at the Racetrack and East Boston. In the Summer of 2000, Boston Health Care for the Homeless received a federal grant that enabled them to set up an extensive health care delivery system to the migrant worker population in the Suffolk Downs Racetrack. The grant allowed Boston Health Care for the Homeless to purchase a medical trailer that will reside on the Racetrack, with increased services that were unavailable before. Some of the new services include expanded on-site physician hours twice a week and blood drawing. The blood drawing facility dramatically improved the accessibility to basic health care services because previously workers needed to be transported to Boston Medical Center for simple procedures. Tranportation to the medical center was a burden on most patients due to the need to leave work during the day. As a result it was many times the reason for not seeking medical care. Due to the increased level of care now received by the migrant workers, we have ceased our involvement at the Racetrack.

While we are no longer serving the underserved communities in Cambridge and the Racetrack, it is important to note that the Outreach Van Project played a crucial role in bringing about awareness of these populations. It is also noteworthy that our goal was not to arbitrarily drop communities, but rather to focus our services on those populations that are not covered by any other outreach agencies. Thus, we are committed to serving the homeless population in East Boston. Currently, we are the only outreach agency serving East Boston. It is our biggest accomplishment, and we are strongly committed to ensuring access to basic medical care to our patient population.

In 2009, the Outreach Van Project started an academic elective for students at the Boston University Schools of Medicine and Graduate Medical Sciences.  With a capacity of about 30 students per year for the past two years, the elective has provided an opportunity for these students to volunteer on a regular basis, as well as participate in readings and monthly educational events designed to both raise awareness about issues faced by the homeless populations we serve, as well as develop skills in outreach work.  The goal of this elective to to create a community of future physicians and other health care professionals competent in and committed to outreach in underserved populations.

The Outreach Van Project is funded by a number of private and public agencies. We would like to thank the Massachusetts Medical Society, The Boston Evening Clinic Foundation, The Greater Boston Food Bank and private donors, including the BUSM graduating class of 1999, 2000 and 2001 for their generosity. Additionally, we would like to thank the staff at the Office of Student Affairs for all their help with regards to administration of the project.