Believe it or not, BUMPOLO competed at a military base last weekend, participating in the West Point Army Memorial tournament!  The Terriers were half bark, half bite, ending the weekend with a 2-2 record. With only nine players, BU put up a great fight against teams like Army and Victorious Secret. Highlights from the weekend include sophomore Pablo Kurzan’s 20 goals, senior Paul Salamy’s surprise visit, and most importantly, the enormous Greek dinner that the team shared Saturday night. This weekend motivated the boys to train harder for the next tournament at UMass, so stay posted! 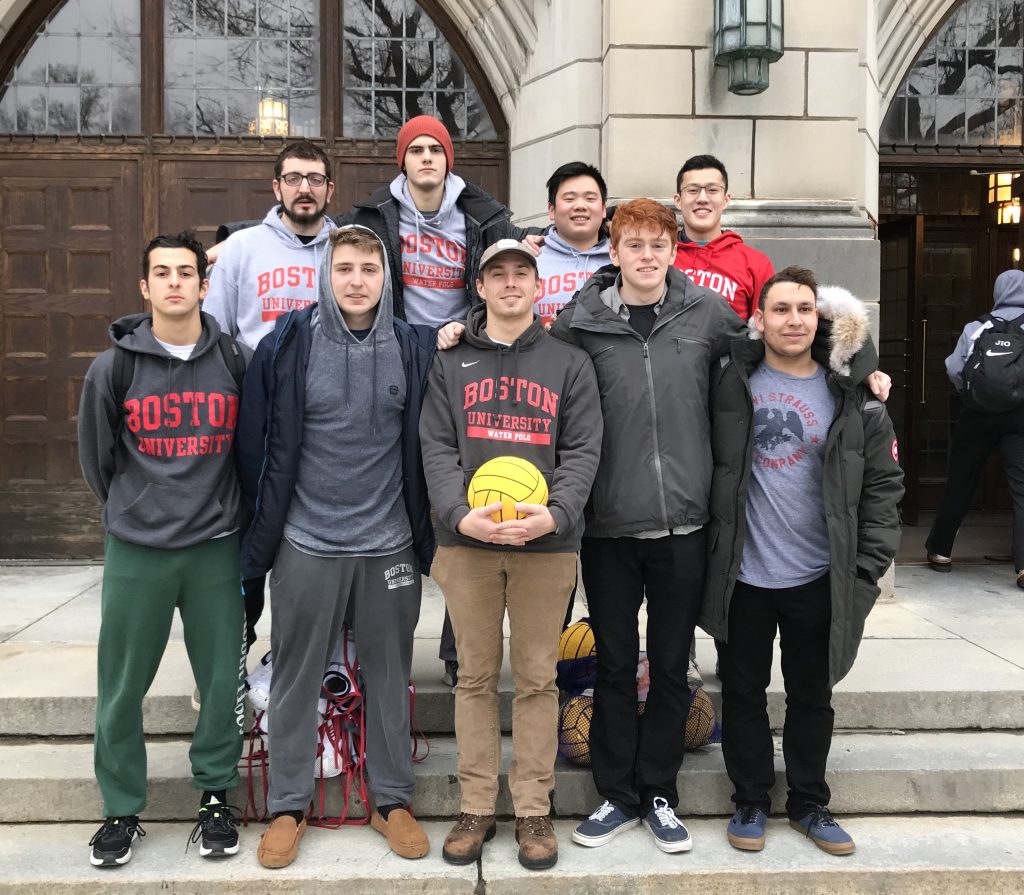 BU Men’s Water Polo has been at it in the pool training 4 days a week and are preparing for our off-season tournaments at UMass Amherst and West Point. We look forward to honing down our skills and playing against new teams.

There are a few important events coming up. Firstly, BU Giving Day is around the corner and participation is really important for BUMPOLO and Boston University in general. It is on April 3rd, 2019. Also, mark your calendars because the 7th Annual Austin Brashears’ Memorial Alumni Tournament is being held on Saturday, April 27th 2019! Please look at the Alumni page for more information about this event.

We also will be sending out regular newsletters so keep your eyes peeled!

Boston University Men’s Water Polo hit the basketball courts today to cheer on the Men’s Varsity Basketball team as they played against Holy Cross. We made several signs to support BU and more importantly, throw Holy Cross off their game! Thank you to BU Club Sports for putting on such a fun event, BUMPOLO really enjoyed sharing team spirit with the other clubs. 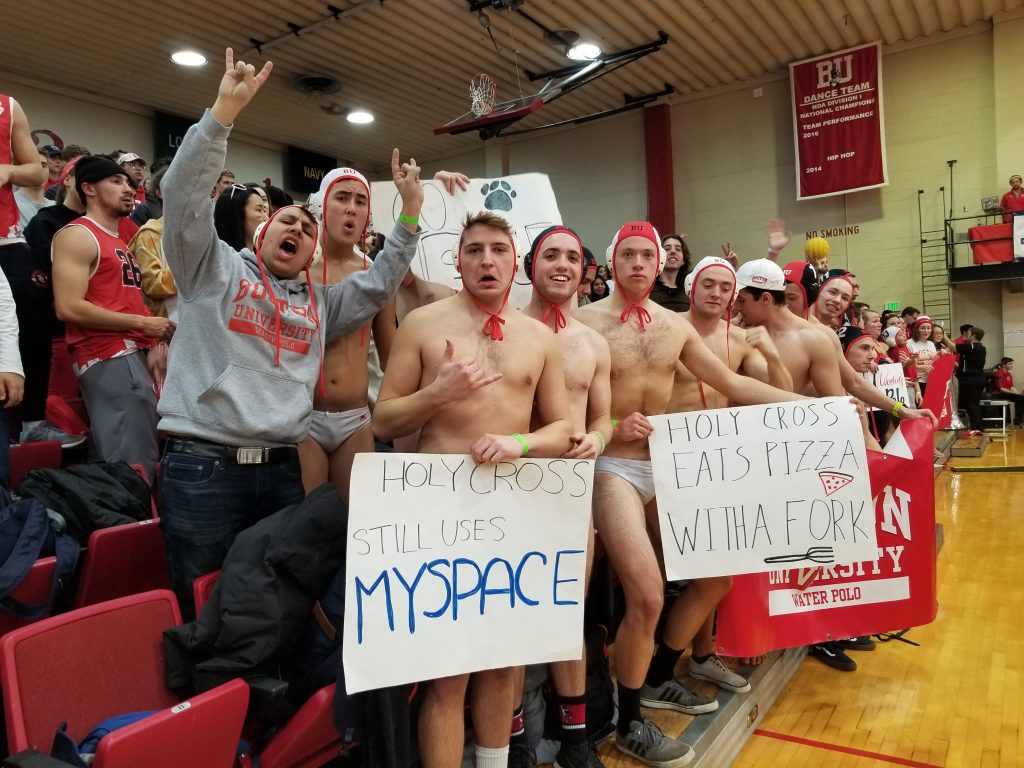 The weekend began with the 3rd-seeded Terriers defeating the 6th-seeded Yale University 14-6. Even though BU won, they needed to step up their performance to beat 2nd-seeded Dartmouth College in their next game…

Luckily, BU responded to this wakeup call and came into the Dartmouth match hot. BU saw a quick lead during the first half, bringing tight defense to the table. In addition, strong communication, counter-attacks, and most importantly, teamwork led BU to a historic win over Dartmouth, winning 9-3. This victory marked a big transformation for the team as BU had lost to Dartmouth 12-8 earlier in the season. The seniors were the reason BU had won this match. Key players were Austin Vargas, Paul Salamy, and Nick Micovic.

The championship game was another edition of the B-Line rivalry, with BU facing the undefeated Eagles of Boston College. Boston College grabbed the lead in the third quarter after a questionable penalty shot. BU gave Boston College a run for their money, but BC’s depth proved to strong for BU once again. Boston College won 10-7, marking an end to BU’s season. Nevertheless, BU kept their heads held high and will continue to train in the off-season. Will next year be the year the Terriers go to Nationals? 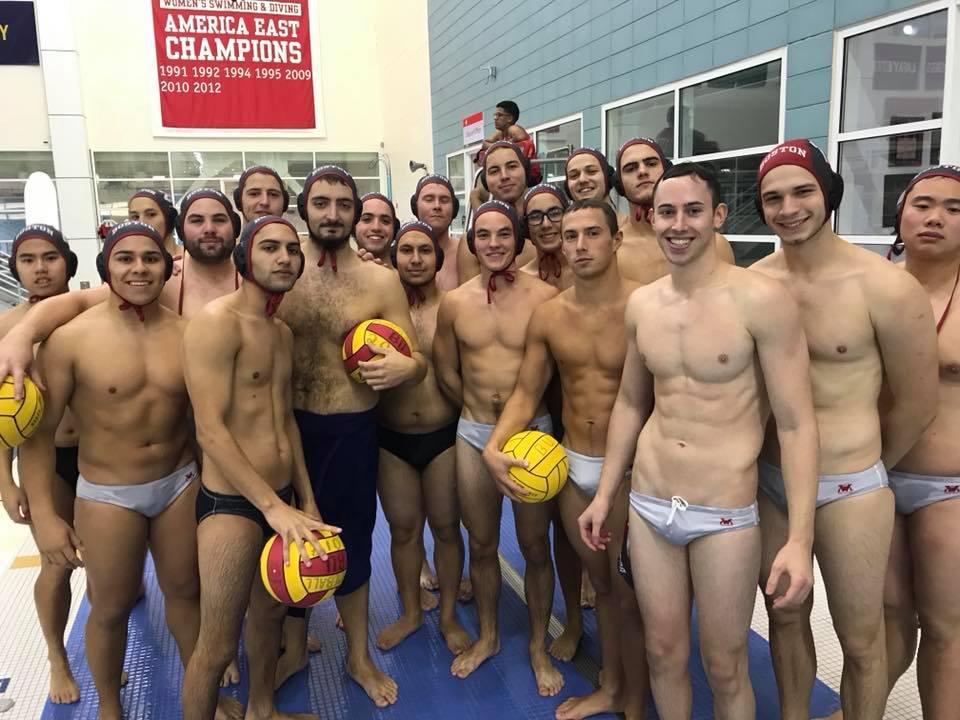 The Terriers traveled to Yale University for the second New England Division tournament of the season, where they took on Northeastern, Dartmouth, UConn, and Boston College.

The Terrier’s first game against Northeastern marked a hopeful start to the weekend, with BU winning 10-5. The entire team had an opportunity to play against Northeastern, thoroughly preparing them for their next game against Dartmouth. After a short break in between games, the BU and Dartmouth match was off to an eventful start. Dartmouth’s outside shooters were definitely on their game. Fortunately, the Terriers were able to adapt their defense and even score a couple times after the first half. Maintaining a coordinated defense throughout the rest of game, BU clinched victory over Dartmouth 11-10.

Beating Dartmouth for the first time in four years was certainly nice to sleep on. The next day, BU was eager to repeat their success. They beat University of Connecticut 16-3 in a quick first match. Bringing this high intensity to their next game against Boston College, the Terriers managed to lead for  the first three quarters. Nevertheless, Boston College’s deep team tired out BU’s first and second lines by the last few minutes. BU ended up losing 9-8 in this very close match. Even though this tournament had an upsetting end, BU sees this as an important learning opportunity for the New England Championships in a couple of weeks… 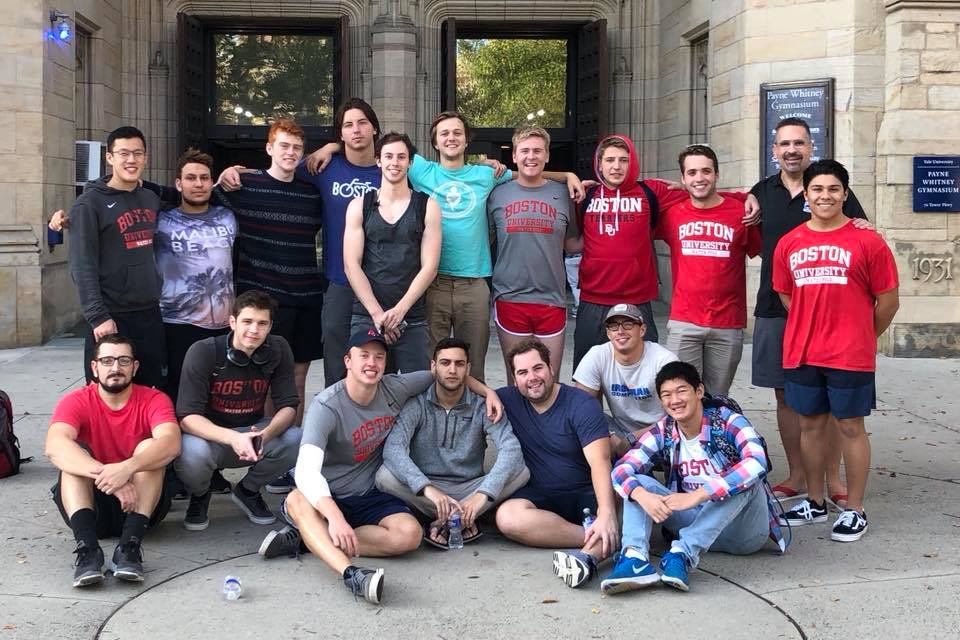 What a weekend! After a scenic drive to Hanover, the boys were ready to put their rigorous training to use in the notorious Dartmouth University pool. Boston University saw their first victory against Tufts University, beating them 20-9. Senior Austin Vargas and Sophomores Kurt Castro and Grayson Wiggins made notable goals.

Unfortunately, the team also faced their first loss of the season against Dartmouth College, losing 12-8. Two starters were injured during the game… Following this tough match, BUMPOLO had a feast at Big Patty’s BBQ, where Junior Nick Rosenberger demolished a four-pound burger!

The second day of the Dartmouth tournament started with the Terriers defeating Yale University 9-4. Dealing with a smaller lineup from Saturday’s injuries, the team experimented with different lines and positions. BU played their final match of the weekend against their cross-town rival, Boston College. Although BU kept up with BC’s speedy team during the first half, BC managed to pull away in the second half, winning 14-7. This match was a huge learning opportunity for both the first and second lines. BUMPOLO’s record from this first weekend is 2-2, leaving a lot of room to improve! 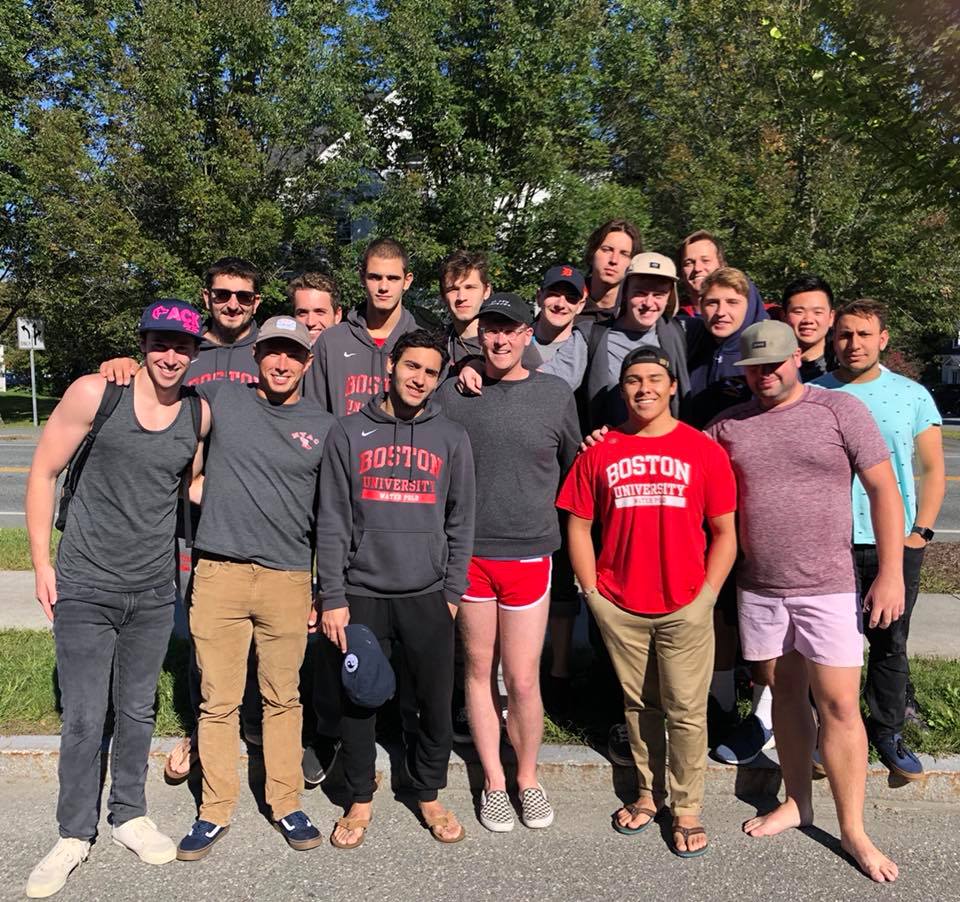 Water jugs and T-shirts? No problem! With the first tournament quickly approaching, the BUMPolo guys are kicking it into high gear to get ready for the season! 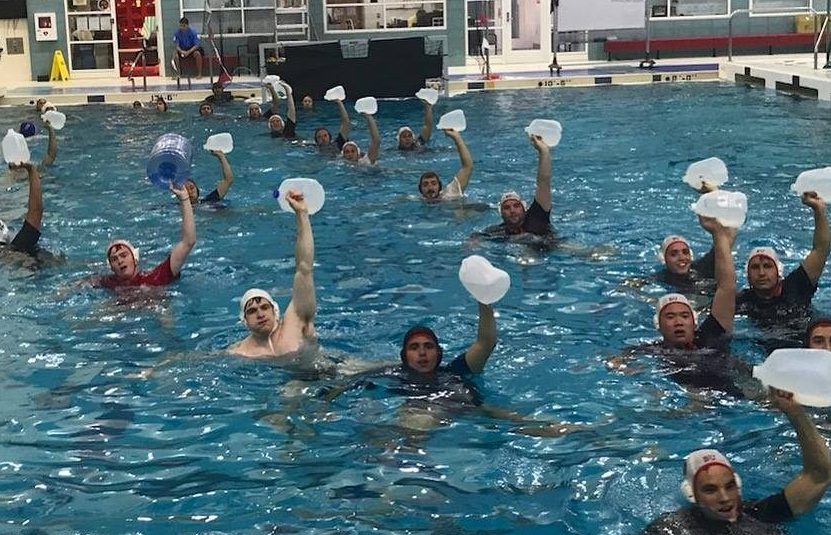 The BU Men’s Water Polo team had a huge success at Splash by attracting over 70 interested players! Thanks to our famous advertising at the fair, new players from Massachusetts, New York,  California, and even Russia participated at our first practice. With all this new potential, the team will definitely have an exciting season. 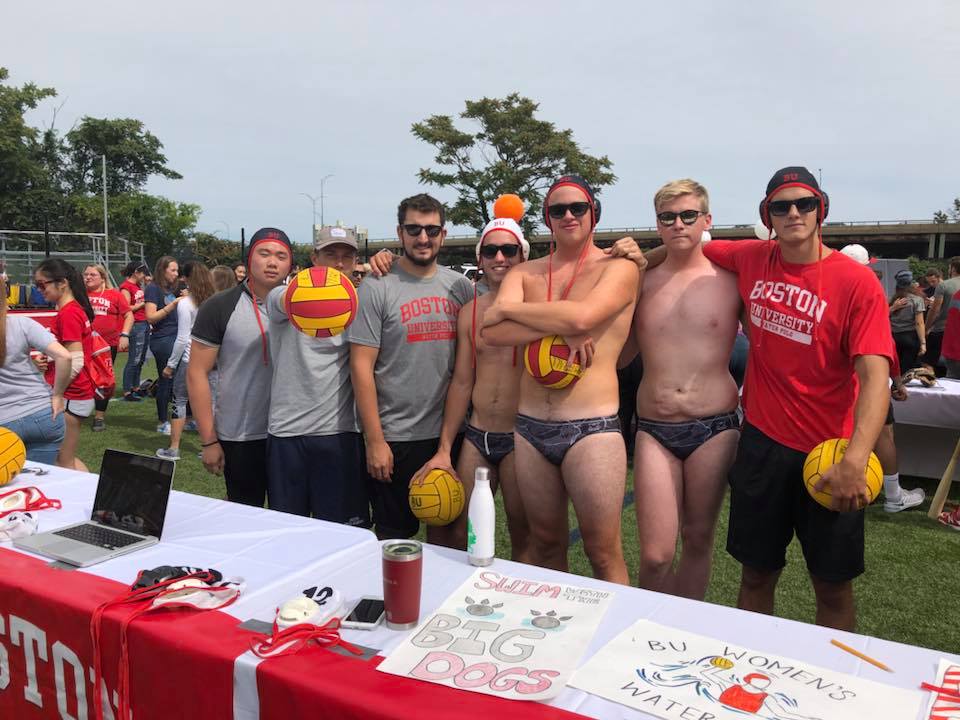 After nearly a three-year hiatus from blog updates, the Men’s Water Polo team is coming in hot with a brand-new website with new information and rare photos of players!

We now have an alumni page, season results section, and photo gallery. The following blog posts will follow our eventful 2018 season!

BUMPolo got back to Boston late last night from our second tournament at Yale! It was a weekend filled with fierce competition in a very unique and historic pool. In our first game against Yale, we made a very strong and concentrated attack in the second half, but we were overcome and lost 10-6. In our second game of the day against UConn, we won with a final score of 16-2.
Sunday began with a win over Dartmouth B with a final score of 9-5 and concluded with a well fought game against Dartmouth A with a final score of 17-6 Dartmouth. Thanks to all those who came out to show some support!! We are looking forward to a great full week of training ahead.