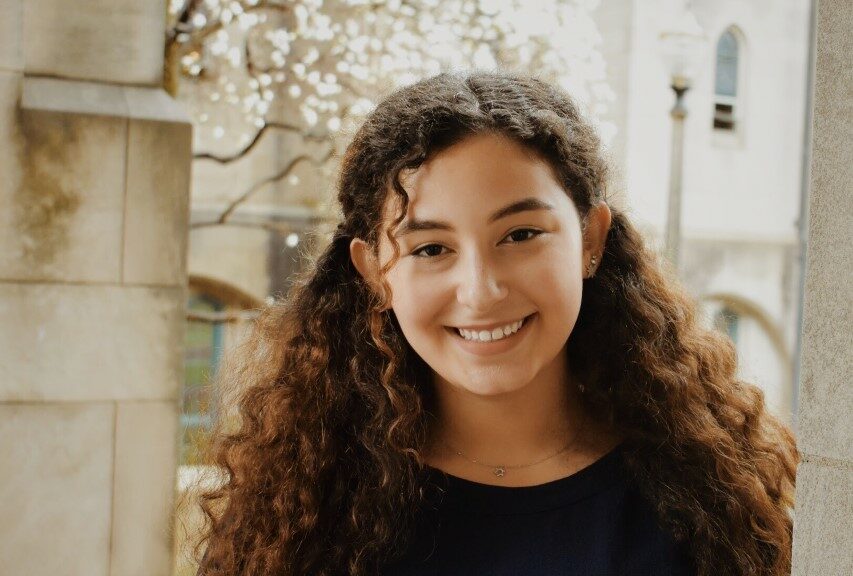 Tallulah Bark-Huss (COM ’21), hails from the windy city of Chicago, IL. As an undergraduate employee at the Elie Wiesel Center, Secretary & Social Media Manager of BU’s premiere Jewish a cappella group, Kol Echad, and VP of Social Action and Holocaust Education Chair for BU Hillel, she certainly keeps busy on campus. We found time to sit down and chat about her many involvements at BU, and her enrollment in the Jewish Studies minor program.

What has your experience been like so far at BU? What is your major/minor? Are you involved in any student organizations, on-campus clubs, or activities?

I’m studying Film and Television in COM and minoring in Jewish Studies. On campus, I’m really involved in Hillel. I work on the student board as the Vice President of Social Action and the Holocaust Education Chair. I’ve been doing that since last year. I put on a lot of different social action events at Hillel. For example, we did an event where we made birthday cards for Holocaust survivors, and another event where we made dog and cat treats and toys and donated them to the animal rescue league in Boston. We’re also planning some trips this semester to go to a food shelter.

I am also very involved in the Kol Echad a cappella group—it’s the Jewish a cappella group here at BU. I’m the secretary and social media manager, but next year I will probably be the president, so I’m very excited about that. We practice twice a week for a total of six hours. We sing a mixture of contemporary American songs, some more prayer-like songs, and also contemporary Israeli music. It’s a big variety. I joined the group my freshman year and it’s really my passion. I’ve also done a little bit with BUTV10 on some of their shows. Hopefully I’ll work more on that in the future. And finally, I’m in Sigma Delta Tau sorority.

Tell us about your involvement with The Elie Wiesel Center for Jewish Studies. When did you first join the team?

I started working at the Elie Wiesel Center at the beginning of this semester, in January 2019. I knew about the building and the Center from my classes as a Jewish Studies minor. I also met Connor Dedrick and Deni Budman through the Hillel board and I knew that they both worked here. Deni and are both Film and TV majors and Jewish studies minors along with working together at Hillel. So when she was preparing to go abroad she thought I would be a good fit for the Center and gave my name to Theresa, the Program Administrator here.

What is your favorite part about working with the Elie Wiesel Center team?

Everyone is so nice. Theresa and Professor Zank, the Center’s Director, have made it very clear that they want me to pursue everything that I want to pursue. If there’s a passion project of mine or something they will support it. Being involved in the meetings and seeing Professors and other adults at the Center working is really cool. It feels good to be seen and accepted and welcomed into that environment. They also really value student opinion which I feel like isn’t always necessarily the case in other places. Also a lot of free food. I love that, not going to lie.

You are one of eight students currently enrolled within the Jewish Studies minor. What has your experience been like so far? Which classes have you taken?

I didn’t know I wanted to do the Jewish Studies minor until Professor Anderson talked to me about it my first semester freshman year. I was taking her Ethics After Auschwitz writing class because my senior year of high school I took a very similar course and really enjoyed it. Professor Anderson mentioned the Jewish Studies minor so I came to the open house which was hosted at the Elie Wiesel Center and talked to other professors about it. Then I really thought to myself, yeah, this sounds fun, you know it’s what I know and I know I’m interested in it. So since then I’ve taken the Blacks and Jews writing class which was really interesting and last semester I took the Holocaust Seminar and the Holocaust Through Literature and Film course. I really loved the Holocaust Through Literature and Film, so now I’m taking the Holocaust Through Film class this semester with the same professor.

Last semester really showed me that I’m really passionate about Holocaust education, which I didn’t really realize so much when I first thought about doing Jewish Studies. That definitely has impacted other aspects of my college experience, like now I’m Holocaust Education Chair for Hillel, and my grandparents are Holocaust survivors. I also think it’s really interesting being in Jewish Studies classes with people who aren’t Jewish, because all my life the majority of people I was in school with were Jewish. I knew that my friend for example knew the same amount of Jewish history as I did so I could say something and immediately know they would understand what I was talking about. But now I have to modify how I go into class discussion, which is ultimately beneficial because I know not everyone in the world comes from the same background.

What does the Jewish community at BU mean to you?

I went to Jewish day schools my whole life so this is my first time in “the secular world” I guess you could say. Also the community I lived in growing up is very heavily Orthodox Jewish. It was definitely a big transition to come to BU in a sense, and I sought out a Jewish community because it does feel like home. It’s nice to meet people that you have so much in common with. Also Jewish geography you probably know their cousin or something, or their friend from camp so that’s always fun. But you know, Purim is this week and all of my friends are celebrating, so it’s nice to have people that understand and share in your culture. It totally makes a big community feel smaller.