(Reposted from The Incidental Economist) This November 2013 UK study confirms what other studies have shown, which is that playing video games does not predict psychosocial adjustment problems in young children. Even watching 3 hours of TV per day in the UK has no meaningful association.

I also reposted my favorite graph about videos and gun violence from an earlier TIE posting.

Perhaps the 50th anniversary of  JFK’s death, done with a $20 mail order rifle, is yet another good time to refocus on gun control.

BACKGROUND: Screen entertainment for young children has been associated with several aspects of psychosocial adjustment. Most research is from North America and focuses on television. Few longitudinal studies have compared the effects of TV and electronic games, or have investigated gender differences.

PURPOSE: To explore how time watching TV and playing electronic games at age 5 years each predicts change in psychosocial adjustment in a representative sample of 7 year-olds from the UK.

RESULTS: Watching TV for 3 h or more at 5 years predicted a 0.13 point increase (95% CI 0.03 to 0.24) in conduct problems by 7 years, compared with watching for under an hour, but playing electronic games was not associated with conduct problems. No associations were found between either type of screen time and emotional symptoms, hyperactivity/inattention, peer relationship problems or prosocial behaviour. There was no evidence of gender differences in the effect of screen time.

CONCLUSIONS: TV but not electronic games predicted a small increase in conduct problems. Screen time did not predict other aspects of psychosocial adjustment. Further work is required to establish causal mechanisms.

Since we’re never going to have an RCT of TV or video games, these kinds of prospective cohort studies are important. In this one, they followed more than 11,000 children in the UK. They found that watching TV for three hours or more (a day!) at 5 years associated with a higher chance of having a conduct disorder at 7 years versus kids who watched less than an hour a day. How much of a difference? A 0.13 point increase in conduct problems. That corresponds, according to the article, to “0.09 of a SD [standard deviation] increase in age 7 years conduct score. Do you understand now? I don’t either.Anyway, the authors said it was a “small increase in conduct problems”.Video games? No effect.Yes, these are young kids, and it’s unlikely that they have been playing much GTA 5 or Battlefield 4. So I’ll look forward to more data. But that this point, it’s hard to point to a large study like this and find a smoking gun. Figuratively or literally.More on this topic here and here.@aaronecarroll

This is my favorite graph on this topic. From here 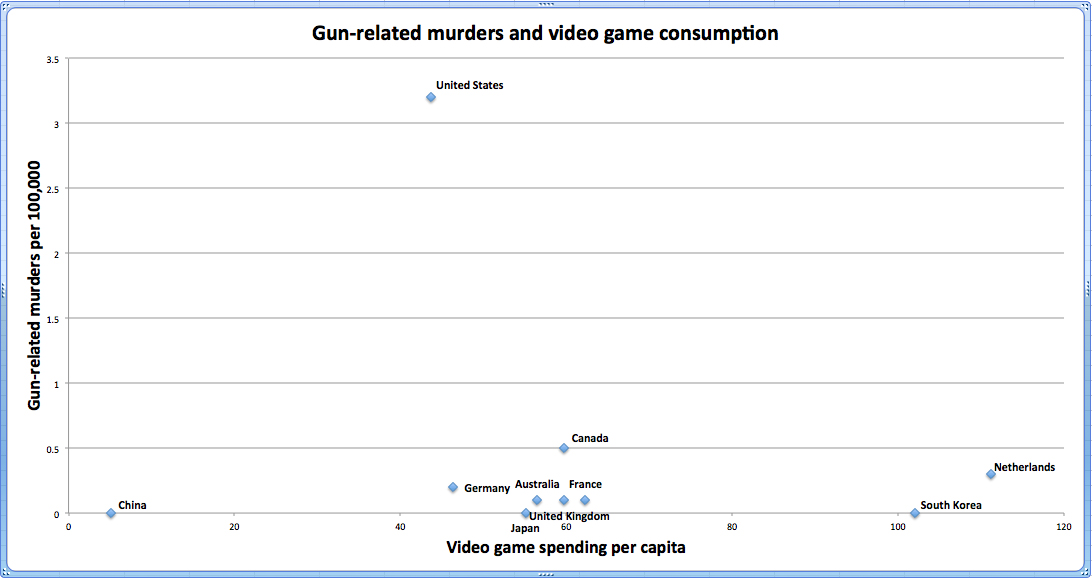