The New York Times had a very interesting article on March 5 which documented differences in rates of vaccination by race across the 50 US states. Whereas some states (Florida, Iowa, Wisconsin and Connecticut (?!?) have vaccination rates for blacks that are less than half of the state average, in Massachusetts the rate for blacks is about 85% of the state average, reflecting the states recommitment to serving needier minorities in the state. 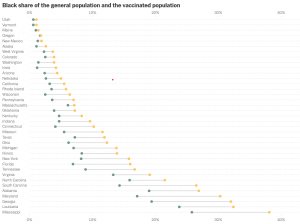 This weekend when I was vaccinated, it was not at my convenient Vanguard primary care provider’s office or at Boston University, which would have mostly served people of privilege, but it was instead provided by a neighborhood community health group in the preschool of a housing project in Brighton MA. Less convenient for me, but much better for the nearby residents.

I am proud of MA for its better-than-average performance on racial equity of COVID-19 vaccinations, even though I know it underlies the enormous dissatisfaction of some of my neighbors and friends of privilege who feel they should have been placed at a higher priority. Being less racist makes some of us uncomfortable, and hopefully also puts more pressure on our government to be sure that everyone who wishes to can get a vaccination. All too often, market systems start by satisfying the needs of the wealthy and privileged (think education, health insurance, zoning, public streets over public transport, etc) and then decide it is not worth doing more for the poor and less privileged. In this case, by vaccinating more minorities, we may also be reducing the overall rates of infection, since infection rates have been much higher in minority groups.

Being less racist makes some of us less comfortable, but in the long run, it may make all of us better off.