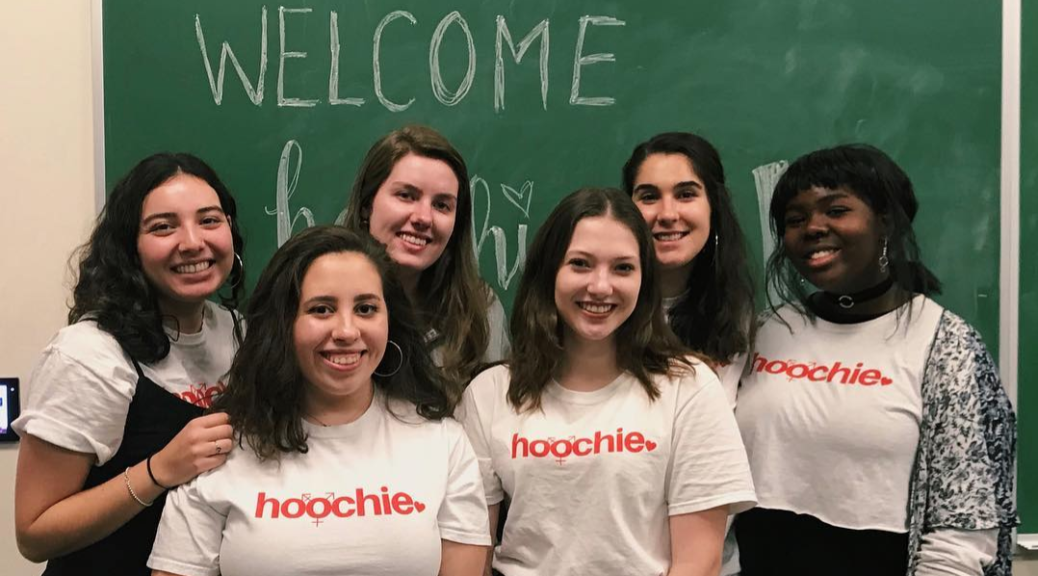 Hoochie is a ‘zine, blog, and activist group committed to intersectionality.

In 2007 the project began as a feminist editorial collective based at Boston University. It was founded by Celie Hart, Gili Malinksy, Maria Thurrell, Meg Falls, and Emily Calvin, a group of friends who together published four ‘zine issues and maintained this blog.

In 2010, it was revived by Sophie Buonomo, and again in 2013 by Dana Barnes and Madeline Aruffo.

From 2016 – 2019, the Hoochie collective produced Hoochie Reader, an annual print anthology edited by college-aged people and featuring feminist creative and written works by college-aged creators. Reader #1 was published under the supervision of head Christian Rose; Reader #2 by Anto Rondon; and Reader #3 by Annie Jonas. As of 2020, the Hoochie Reader project is now  produced by the collegiate publishing lab, Bonfire Press.

From 2018 – 2019, Hoochie established a sister group called HoochieACTIVE led and organized by Johannah Coichy. HoochieACTIVE fundraised and volunteered for causes affecting marginalized communities, organized events in and around Boston, and lead a presentation called Fourth Wave: Understanding Privilege within Intersectionality for the BUnited Student Diversity Conference.

Hoochie continues now as a collective focusing on organizing, advocacy, and platform amplification, through their ‘zine, blog, social media, and activist resources and events.

The Origins of Hoochie: A Little About Our Name

“I went to work and the office girls/ were all burning their poetry./ It wasn’t good,/ but in the neighborhood,/ now they’re all just a/ Hoochie Woman.” Tori Amos’s song “Hoochie Woman” was featured on her 2005 album, The Beekeeper. While the song itself was not exactly about the reclamation of derogatory terms, in 2006, when I gathered a team of feminist writers and artists to create a feminist magazine at Boston University, that is exactly how we decided to use it. I think personally, the negative response I initially got from so many women when I originally proposed the name fueled my determination to name this magazine after that powerful Tori Amos song. And after much deliberation over the meaning and effect the name would hold, we all came to embrace and love the name.

Merriam-Webster defines “hoochie” as slang that means, “a sexually promiscuous woman,” and we all liked the idea of embracing female sexuality as a positive, as opposed to a negative slang. While this could not be categorized exactly as reappropriation, since “hoochie” seemed to have originated as a slang and nothing else, the name choice was less about the actual word and more about the concept behind it. Yes, we wanted to show that we were not afraid to celebrate female sexuality, but also, we were not afraid to be bold. A sexually promiscuous woman is an explorer—she explores her pleasure, she explores her body, she explores intimacy, and she explores what it means to be a woman in modern society. That was what we were trying to do with Hoochie Woman. That was why the original logo had a little girl with a telescope climbing on top of the words “Hoochie Woman.” She represented our need to explore—our need to climb on top of the mountain of social constructs and look closely at issues like gender and sexuality. The girl in the image was also wearing a dress and her panties were showing, making her a “hoochie” according to society’s standards. However, she was also a little girl who should not be sexualized or embarrassed of her undergarments, so instead, she explored her world without shame or reservation. Her back faced us because she had no concern for what we thought of her.

Personally, I aspired to be that hoochie woman, and we all wanted to create a community of women who were not afraid to be “hoochies,” however they chose to define it. We wanted to create a word that could mean anything, as long as it was positive. We wanted to give women a word with which to proudly define themselves, and we decided that word was “hoochie.” Almost every woman can identify with being called a “slut” or “hoochie” at some point in their lives, and we wanted to tap into that experience and show women that it was okay to be whatever they wanted to be, including a hoochie. We also wanted to create a space where women would be safe to talk about their experiences without shame because shame stunts growth and discovery, and we wanted to discover ourselves. I think, in a sense, we were all in search of our inner hoochies and needed a space where it was safe to embrace her. We tried to carve out that space through our words, our art, our images, our thoughts, our magazine. I can only hope it has done for others even half of what it did for me as a young, burgeoning feminist who needed a space to find her voice. I found it in Hoochie Woman, and if it shows even one more woman her strength and voice, then it has done its job.