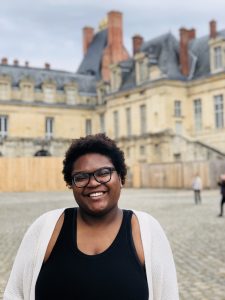 ABOUT: I’m a Haitian-American who wants their voice and actions to be heard regarding issues that are happening to the underrepresented, racial and ethnic minorities in the world. I’m passionate about LGBTQ+ rights, immigration, incarceration, and civil rights issues that people of color, especially Black people, face today.

Q: You’re a part of JVS and SOCA, could you explain how you got involved and why these organizations interest you?

Sam: Sure! So, I’ll start with JVS. I was in Paris [studying abroad] and I was looking for a legal internship because I want to be an attorney in the near future, and JVS showed up and I thought it sounded really interesting. I feel like the first step [to immigration law] is to start working with immigrants and refugees, so I decided to become an ESOL classroom assistant. I have a little experience teaching English because my parents are immigrants from Haiti. And being in Paris I also realized how hard it is to learn a different language in a different country that you’re new to, that shits hard, and I felt like I could relate to these people [ESOL students], so I interviewed in Paris and they basically gave me the job! I was an intern until COVID-19 when my internship stopped, so now I volunteer on Mondays. I call people from 12 pm to 5 pm and help with homework and interview practice. Same thing on Thursday, I just started last week, I’m in a Zoom classroom helping them with grammar. I joined SOCA freshman year spring semester. At first, I was scared because I’m not used to being around so many Black people because I went to a private white Catholic school from kindergarten to 12th grade in southern New Jersey. I didn’t feel in tune with people when I came to college. I joined SOCA hoping that I could spread awareness for West Indian and Caribbean culture and get to know my culture more, honestly.

Q: How has activism influenced you and in what ways has it affected your future goals?

Sam: Since becoming an activist, I’ve had more serious and difficult conversations with people, like family members. Before, I used to be quiet about my stances on most everything because being in the neighborhood that I am and being with the people I’m with for mostly my whole life made it difficult to fight for immigration and LGBTQ rights. It’s very difficult, but I realized that just speaking up made me more comfortable with who I am as a person and as an activist. It is hard to have difficult conversations with people you’ve been friends and family with for forever, but I think it’s really important as an activist to have it known that you are here to fight the system, discrimination, everything that’s happening in the world, especially America.

Q: What role do you think student activists can play in terms of making change?

Sam: Honestly, having their voice heard. Something that happened fall semester was when Ben Shapiro came to campus. Basically, Black BU and everyone against him was like we are not standing for this, and even though he ended up speaking on campus, even though we didn’t succeed in having him removed from campus, we succeeded in coming together as a community. Realizing that our voices should be heard and that you can’t just ignore us because we are here we are present and that we don’t stand for injustices, especially a person who is denying the racism and discrimination people of color, especially Black people, have faced for hundreds of years, is a real testament to what students can do on campus.

Q:  What do you think it means to be an activist and how do you define it for yourself?

Sam: I think being an activist means you fight for a social or political cause that you believe in and you try to take steps that will further better other people’s lives, wherever you are. I’m an activist by being in SOCA and being an ESOL classroom assistant because I want to help the transition from coming from a different country to coming to America be easier for people because I know how hard it was for my parents and I understand how hard it is to learn a different language, to come to a new place not knowing anyone, and to try to figure out your spot in life. I don’t think we should discriminate or be mean to these people who just want a better life and better opportunities than they had before. It’s wrong, honestly, that so many people are in disagreement about how people should have equal, basic human rights in America just for being from a different place.

Q: How are you feeling about the upcoming election?

Sam: The system has been broken since the beginning, we’ve known this, and people are surprised that this is happening with Trump against Biden, but I’m not. As a person of color, as a Black person, as a Black queer person you realize that this shit’s been happening since the beginning of time and that people are just now realizing that oh we’re fucked, but no, we’ve been fucked forever, now it’s effecting you and that’s the problem. Hopefully people realize that shit has to change. Keep speaking up because we know that speaking up helps in the long term, we get laws changed, shit happens, but right now the future of America is kind of dim. We’ve got to try and strive on.