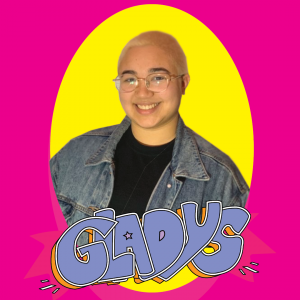 NAME: Gladys Vargas // she, her, hers

ABOUT:
I am a student, writer, and artist! I’ve lived in the Greater Boston area my whole life, born to immigrant parents from Venezuela and Puerto Rico (Caribeños wya??) I got involved with activism through my school, community, and church. Being raised Christian especially motivates my work because though it’s been a challenge to reckon with the violence of the church as an institution, as well as exploring my identity as a queer person, I think that loving unconditionally and serving the most marginalized communities is something that the gospel and true social justice work have in common. The work I do right now is through groups on campus, as well as using school assignments as an excuse to learn more about the causes I’m interested in!

Q: Could you explain what Yoni Ki Baat is and your involvement in it?

Gladys: Yoni Ki Baat was brought to BU last year by Ina Joseph (she is a graduating senior this year) and it’s a part of The Vagina Monologues. It’s like the sister show to The Vagina Monologues by Eve Ensler. But it’s put on by students who write their own monologues, and specifically, they are students of color and non-binary people. Yoni Ki Baat was made to highlight more issues within sexuality at the cross-section of being a woman or being non-binary or being a person of color, because The Vagina Monologues, while necessary, is like a bit dated in it’s content and it’s very white focused and woman focused. I started out doing Tech for The Vagina Monologues and then wrote a piece for Yoni Ki Baat. I wrote it really fast one night and then I didn’t think that I was gonna share it with anyone, really. Then my friends encouraged me to join Yoni Ki Baat and I just felt like sharing anything. So I chose that piece to audition with. And then I kept editing it and it became a really amazing process of working with this amazing group of people. And then also just like coming into my own and realizing different things about the piece that I hadn’t realized before. It became really empowering and fun. We were supposed to have a performance, but that was canceled because of Coronavirus, so we adapted the episodes into a podcast on Spotify.

Q: What are some challenges that you see as a student activist on campus?

Gladys: One of the things that discourages me the most is when people say that they’re supportive, but then they don’t show up with support or when their support is not where it should be. When people post on their Instagram story in support of something, but then they don’t actually do the work of donating or learning more about a certain community it feels like they don’t actually want to get involved in the work. It feels like they’re more invested in trying to appeal to a group of people that are criticizing them for not being involved.

Q: How do you think we can encourage people to take action beyond just posting on social media in a way that isn’t performative?

Gladys: People have to open themselves to learning because you can’t force someone to learn if they’re not willing to. I think that a really important part of activism is being willing to know that you don’t know everything, even if it’s about a community that you’re a part of. So it’s just being willing to listen to other people’s perspectives and entertain their ideas. Even if you at first are like, oh, that doesn’t seem right at all. Just be willing to listen to it in its entirety and absorb it and really think through it.

Q: What are some right and wrong ways social media can be used as a tool for activism?

G: I’ll start with the wrong ways to get the negative out of the way. Social media can be such a time suck and something that can make us really stuck in our own heads. It can make us insecure if we’re not using it smartly. We can become really easily jealous of other people or really shameful about ourselves and just feel guilty. There are a lot of negative feelings you can associate with social media and also the laziness that we acknowledged earlier about people posting and thinking that that’s activism in its entirety, or thinking that they know everything about an issue because they saw a video on it. I love social media as a tool for activism because it’s such a great way to learn about other things that you wouldn’t normally learn about and to be connected to people you wouldn’t normally meet. It’s such a global, international platform that allows you to learn about something going on in a different country and see how it relates to something going on in your community or in a state around you. I love that. I think it’s a beautiful way to network. And I’ve been able to connect with people that I wouldn’t otherwise.

Q: Do you have any favorite Instagram accounts or recommendations?

Gladys: I really like following @ndn.o. They are a graffiti artist and activist who often makes stickers and does work that highlights Native issues. They are someone who does research and takes information from what they know from their community and their experience and highlights it on their page publicly. That was one way that I learned a lot about how the US government is still oppressing Indigenous Americans. So that’s one account that I really like and then I think people should support. But also, @queerappalachia is a great account to explore this huge group of white people that’s oppressed, which is the Appalachian people or people who live in that area. We stereotype Southern people as hillbillies who don’t know anything, but there is a real harm in that stereotype and there are real living, breathing people who aren’t super conservative harmful people living in the South and they are disadvantaged by the same people that people of color and low income people are. I like that account because it highlights that issue in its entirety, especially being queer in Appalachia. I also really like @thefatsextherapist. Her name is Sonalee and is a therapist who does trauma and sex informed work. I found her account really eye opening because we struggle as a society with fatphobia. Her work is so unapologetic in that it says what needs to be said. And then you absorb it and you learn it and you think about how it’s influenced other things in your life. I think that’s really powerful.

Q: What role do you think that student activists can play in terms of making a change?

Gladys: I think that if anybody is aspiring to be an activist or considers themself an activist, whether they’re a student or not, what it really means to me personally is paying attention to the ways that people are being marginalized in your space and listening to people when they complain about marginalization. Listen to the most vulnerable populations where you are already and learn how you can help them, because that’s what honest to real activism is. It’s paying attention and being real about what people are struggling with and acknowledging that you may have had a role with it in the past and moving on and learning about it. I think activism is a lot of learning.

Q: What do you think it means to be an activist?

Gladys: For a profile I was writing, I interviewed Fiona Phee, who is a great organizer in Boston. She’s the executive director for March for Our Lives in Boston. I asked her a similar question. She was really, really smart and said that there’s a difference between being an organizer and being an activist. Her work is organizing work. But anybody really can be an activist, because if you are surviving the system that you are in, if you are going up and going to work every day or providing for your family or taking care of the people around you, then you’re surviving in a system that wasn’t built for you and that is activist work in itself. Especially because we can often gatekeep the word activist and say you’re not an activist if you don’t do these certain things. And then it becomes a source of shame or anxiety, and that’s not what the work is about. It’s about welcoming people and being ready to see how everybody can fit into this new vision that we have for the future.