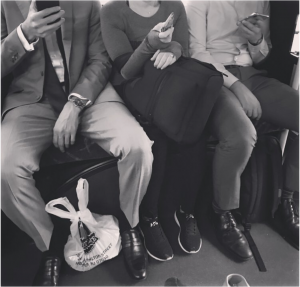 Manspreading: “the practice in which a man adopts a sitting position with his legs wide apart, in such a way as to encroach on an adjacent seat.”

This behavior – most commonly spotted on public transportation – is often attributed to a man’s “intrinsic need” to assert his authority and subsequently undermine a woman’s space. The prominence of manspreading on transportation in big cities poses a daily struggle for professional women on their way to and from work, and the newly noticed trend has attracted attention all over the internet and new sources.

Spinal neurosurgeon John Sutcliffe explains that the art of manspreading could in fact be a matter of physicality, rather than sheer egotism. Sutcliffe states that the “overall width of the pelvis is relatively greater in females and the angle of the femoral neck is more acute. These factors could play a role in making a position of sitting with the knees close together less comfortable in men.” He also suggests that most men “adopt the more spread posture”to avoid testicular compression from the thigh muscles.

While this is biologically true, humans – as an advanced species – have the ability and willpower to exhibit behavior that overcomes historically biological instincts. Men have the brain capacity to notice how much space they are unfairly consuming and to make a rational decision that would equally benefit those around him. 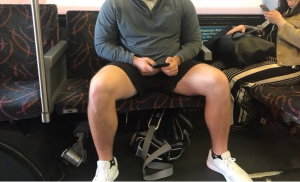 Spain’s capital has recently taken a stand against manspreading: Madrid’s Municipal Transportation Company (EMT) has installed new signs in all of its vehicles reminding transport users to “maintain civic responsibility and respect the personal space of everyone on board.”  These signs serve as a visible warning that assuming bothersome seating positions is prohibited in the city’s transport system. The move comes after months of campaigning by women in Madrid led by the group Mujeres en Lucha. 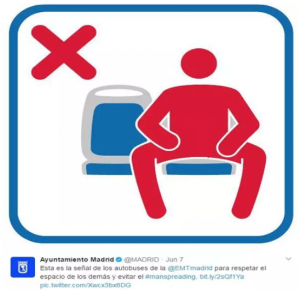 A similar movement has grown in the transportation system of NYC, where the Metropolitan Transportation Authority unveiled public service ads that encourage men to occupy only one seat in subway cars. However, whether or not they will pay mind to the new ads is a whole other question. The ads have, of course, received criticism from many subway riders; a 20 year old man recently made comments declaring he’s not going to “cross my legs like ladies do. I’m going to sit how I want to sit … I’d just laugh at the ad and hope that someone graffitis over it.”

While I think that enacting a law to force men to sit courteously seems a bit extreme, it is quite upsetting that it has been deemed necessary. Once again, we are policing behavior with the wrong mindset; is it too much to ask for men to simply take up one seat? This is yet another example of our failure to raise our children to think civilly and merely respect the women around us. 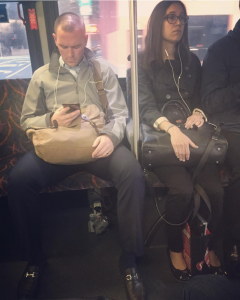 On the flip side, Mic released a video showing what happens when a woman manspreads on the New York subway; blog editor Elizabeth Plank wanted to see the reactions when a woman spread her legs in the same manner as men in public. Her male coworker, Nick, tagged along. Not surprisingly, Elizabeth attracted notably more glares from the men compared to Nick, who received very little.  While virtually no one noticed Nick’s manspreading, Elizabeth was made to feel uncomfortable and even shamed in her chosen posture. Nick – whose behavior was seen as just something that guys do – had to move only when people directly and repeatedly asked him to, whereas Elizabeth’s behavior was seen as both rude and unladylike.

How do these misogynistic and bigoted standards persist in an “evolved” society? While women continue to make strides in prominent areas through activism, how do we – as a society – go about shaping the minor habits of men that have drastic impacts on the minds of young girls and the women they grow up to be?

For starters, we must remember and defend our right to space. Although it is easier said than done, women need to protect our right to travel to and from work in the same manner as men. And we must recruit men that share in this belief.