Within the setting of a rather liberal university, the topic of wage inequality comes as no shock to any student. Especially over the course of the past year, the overhanging statistic is a familiar phrase to many Americans: for every dollar a man makes, a woman is expected to earn 80 cents. Throughout the past semester I have heard this echoed countless times, from conversations at the dining hall to lectures given by reliable professors. While I agree that it is beneficial to bring attention to this statistic, it is essential to realize that this number does not accurately depict the reality that many women of color face within the workforce. Although white women only make an average of 79 cents to the white man’s dollar, black and brown women tend to consistently earn lesser than their white counterparts, producing a wider and more disparaging difference when it comes to income. While this is certainly a cause of concern, the issue is rarely brought up when discussing the gap. The influence of race is a component that has become greatly ignored, erasing the plight of many struggling women within the United States.

To assess the full complexity of the issue, we must look at the numbers. On average, black women working full time throughout the year tend to earn 63 cents to each dollar earned by a white man[1]. Native American women fall behind at 57 cents, while Latinas follow with a mere 54 cents per dollar. When comparing the 2018 Equal Pay Day[2]date for each of these groups, the disproportion becomes even more obvious. For white women, the date lies on April 17, symbolizing the sixteen months it takes for a white woman to make the same amount as a white man did in the year 2017. However, for black women, the date lies on August 7th, a full twenty months. Equal Pay Day for native american women lies over a month later on September 27th. The final date falls far behind on November 1, taking the average woman of latin american descent 23 months to make the same amount as a white man made in 12. 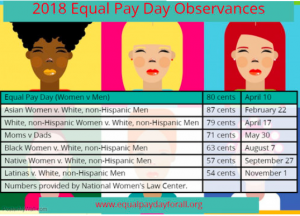 On the other side of the spectrum, asian-american and pacific islander women in particular seem to be at the head of equal pay, with the average being 87 cents per dollar- a full eight cents more than white women. Although this seems to be a major leap for women of color, it is also necessary to discuss the imbalance of income when broken down by ethnicity. Many fall far below the 87-cent mark, a majority being south-east asians and pacific islanders. Burmese women in particular fall at the lowest cent value, earning 51 cents compared to the white man’s dollar[3]. This equates to a difference of roughly $27,000 a year, having a larger imbalance than any other ethnic group. With the poverty rate of the United States’ asian population being 12%, the income gap is a debilitating to many households, 26% of which contain multigenerational families.
Even with the severity of these statistics, many reports fail to mention the struggle confronted by non-white women. The 80-cent number has been integrated as the norm, disregarding the racial factor that heavily has restrained our black and brown populations. By overlooking these essential figures, we are contributing to the system that has time and time again shoved women to the margins of the workforce, and one that has consistently worked against those of racial minority groups.
Taking an intersectional approach to these issues is fundamental for understanding the state of current affairs within our country. If we are to recognize the gender wage gap, it should be with all women in mind, not just those at the frontlines of this inequality. Recognizing and demanding just treatment for all is a necessity for closing the famed gap, and can only be achieved by addressing the racial disparity in honest and public conversation.