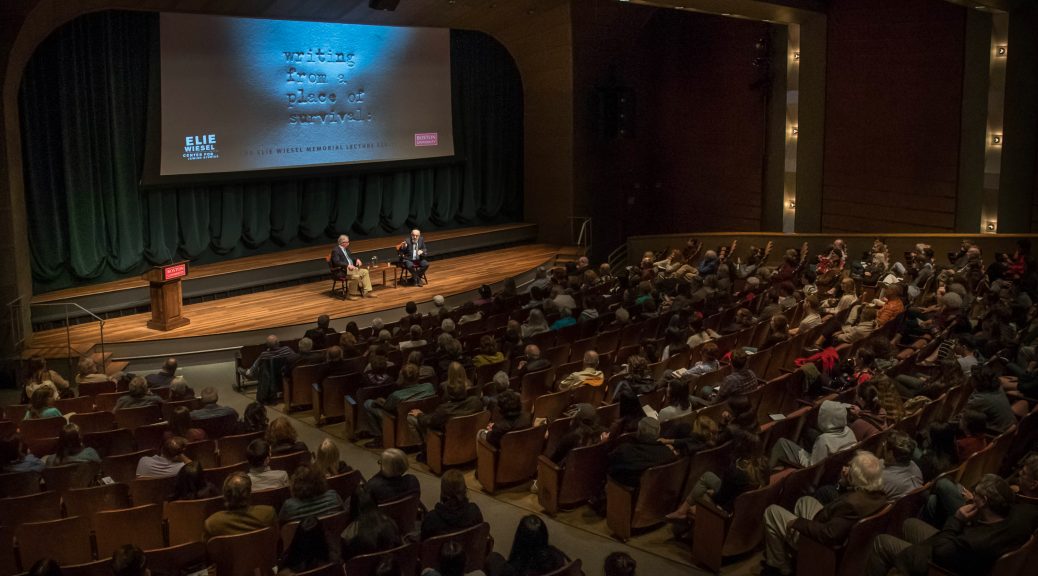 The 2019 Elie Wiesel Memorial Lectures were off to a strong start on Wednesday, Sept 18, at the Tsai Performance Center, with a thoughtful conversation between BU Hillel Rabbi emeritus Joseph Polak and Professor Henry Knight of Keene State University.

Rabbi Polak was a fixture on the BU campus for virtually the entire time Professor Wiesel was on faculty, and the two were deeply connected. Both were survivors of German concentration camps. Wiesel was a teenager when he was deported from his native Sighet, then part of Hungary, in 1944. Polak, a native of the Netherlands, was interned with his parents, first in Westerbork and then in Bergen Belsen. By the time the train that was on its way to Terezin (Theresienstadt) was liberated by the Russians he was all of three years old. Wiesel was witness to his father’s death in the camps, an experience that is at the heart of Night. Rabbi Polak  lost his father to typhus at the transition camp in Tröbnitz and vividly recalled the moment when a nurse or social worker informed him of his death. He was too young to comprehend the words but he knew an abyss had opened. Polak spoke of the ongoing humiliation  he felt as a child survivor: adopted by a Dutch couple when his mother was on death’s door he was embarrassed by his mother’s angry letter to his adoptive parents; as a six-year-old  saying Kaddish for his father in his Montreal synagogue he was humiliated because he was the only child sent to say Kaddish among all the adult men, none of whom ever asked him why and for whom. He spoke of the acoustics of the Holocaust, because certain sounds remained unforgettable. Above all he spoke of shame. “In the face of the humiliation of the Jews, even G-d himself must feel ashamed.”

The Q&A was a love-fest for Rabbi Polak, with BU alumni recalling moments of inspiration their Hillel rabbi had provided for them over the years. Eventually the conversation turned to what Rabbi Polak’s experience and story meant for us today. “How do we make sense of a wounded God,” was one of the haunting questions posed by an audience member.

Hank Knight was a cautious interlocutor, listening intently and probing gently. In the Q&A he spoke of himself as a “recovering racist” who grew up in the Jim Crow South. His career as a theologian and university chaplain was driven by the realization that he too was called upon to bear witness. In private conversation he shared stories about his long personal friendship with Elie Wiesel. As intended, then, the night was in many ways an homage to the inspiration behind our series and everything we do at the Elie Wiesel Center.

The second and third of these lectures are scheduled for October 28 and November 18, respectively.  (Check our calendar for details.)