“By ‘heteronormativity’ I mean both those localized practices and those centralized institutions which legitimize and privilege heterosexuality and heterosexual relationships as fundamental and ‘natural’ within society” (Cohen, 440).

Why this term is relevant:

Any sort of “prescriptive ideal paradigm” has the potential to be exclusive. In the case of heteronormativity, the institutional and local practices that Cohen describes enact a type of violence against the “other” who does not conform to this hegemonic ideology. Assuming that heterosexuality is somehow the natural or essential mode of sexuality ultimately engages with Judith Butler’s critique of the “copy/origin argument” (See Butler, Judith. “Imitation and Gender Insubordination.” The Lesbian and Gay Studies Reader, edited by Henry Abelove et al., Routledge, 1993, pp. 307-20). If heterosexuality is “fundamental and ‘natural’” (Cohen 440), then non-normative forms of sexuality seemingly become “copies” of an ideal paradigm. This is a dangerous notion that replicates a series of violent and exclusionary acts against various groups of people.

This is not to say that heterosexuality is inherently bad, but rather the act of upholding one form of sexuality as the morally correct, ideal, or “natural” mode becomes incredibly problematic and does not capture the wide range of sexuality. As a dominant ideology, heteronormativity also promotes the “heterosexual nuclear family” as the ideal model for society. As a result, this restrictive notion devalues other family structures that are equally valid and supportive.

Here’s an example of heteronormative thinking: 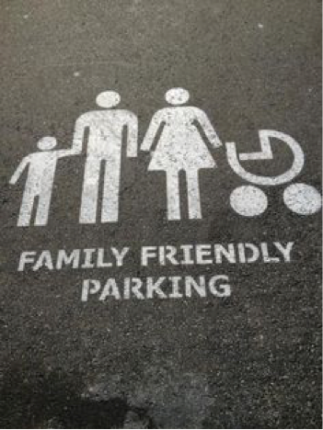 The author of this post would like to acknowledge that the implications of heteronormativity are vastly complex and have not been covered entirely in this short blog post, which is not to say that they do not exist, since they clearly do.

Here’s a brief definition of sex positivity from the Women and Gender Advocacy Center at Colorado State University at http://www.wgac.colostate.edu/sex-positivity:

“Like many terms within feminism, sex positivity means different things to different people. As a broad ideology and world view, sex positivity is simply the idea that all sex, as long as it is healthy and explicitly consensual, is a positive thing.”

Sex positivity resonates with the message of various social and philosophical movements (i.e. body positivity) that aim to critique and deconstruct (hetero)normative social mores that exclude and marginalize different groups of people. As an increasingly inclusive notion, sex positivity is a means to celebrating the complex, diverse, and expansive nature of sexuality. Its strict focus on consent serves as an ideological tool for combating issues related to sexual assault, domestic violence, and other forms of gender-based violence.

Sex positivity is not something that endorses the idea that “if someone really loves sex” (an idea which this term does not necessarily connote either) then that allows an individual to judge others for their sexual activity or orientation. It is not about judging others. It is not about exclusion. Sex positivity promotes people, pleasure, and people giving/receiving pleasure.

See Dr. Carol Queen, educator, writer, sociologist, sexologist, and sex-positive feminist, at http://goodvibesblog.com/sex-positivity/ for more on what sex positivity is and is not!

*Content above based on lecture by Dr. Carol Queen at BU CGSA and from her blog: http://goodvibesblog.com/sex-positivity/

Why is this term relevant:

The message of sex positivity is one of inclusion that encourages healthy and consensual sex! 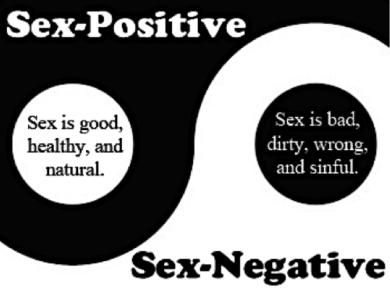 Ever since I read Simone De Beauvoir’s The Second Sex, I have considered myself a Feminist. This has never been a problem, not for me nor for those close to me. My parents celebrate it, my siblings do so too, my friends also, but there are some who share with me their criticisms for the movement, expecting to hear from me an argument that would convince them otherwise. The one criticism I tend to get is this: “Why is it called Feminism if it is a movement about Equality?”

In the following text, I will briefly explain to you why I think it should be called Feminism, and not something else, perhaps Egalitarianism. It is quite simple, but I will also draw it so it can be understood fully.

Feminism is defined, “a movement or theory supporting women’s rights on the grounds of equality of the sexes” (Oxford American Dictionary), that is, a movement grounded on the idea—or truth—that women are equal to men, and thus, deserve having equal opportunities. When it first arose, around the 1920s in Europe, the movement aspired to achieve a milestone: to allow women to vote. It succeeded (the Suffragette movement in England), and made it clear that women could hope to participate more in social and political life. Back then, this meant breaking many stigmas and eliminating many boundaries that limited women to the household and forced them to obey the superior sex: men. Gradually, this dream or hope became present in many works of literature and art in the voices of women—and some men—who understood that Feminism did not mean establishing a Matriarchy or supporting the supremacy of the female gender. It only meant raising the female gender to the level in which the male gender already was. It was not about limiting male rights, but about giving females the same rights, too.

Those were the ideas that had been presented by many, including De Beauvoir and Hannah Arendt in the 20thcentury, and even Mary Wollstonecraft, back in the 18th: that women were able to be as good as men in politics, science, art, and any other academic or practical area in the world; that they should be allowed to prove this, and that this did not threaten men; that including women would help all fields with different insights, opinions, and an influx of great minds.

It would also become very clear that Feminism was not a female only movement. Men should be involved because it is the image of their mothers, their wives, their partners, their female friends, and their daughters they would be fighting for. Accordingly, Feminism could only work if Education in the household, and in Universities and Schools celebrated the participation of women, too, and understood that the only difference between men and women was physical, not intellectual or practical.

This is Feminism, and it has been so since it emerged in the 1920s; even when nowadays, there are different waves with different objectives—some, perhaps, more valid than others—that sometimes do not fully resemble what Feminism used to be.

The thing is… Feminism’s goal is that men and women get to enjoy the same opportunities and privileges. But this does not mean it should be called Egalitarianism, “belief in or based on the principle that all people are equal and deserve equal rights and opportunities” (Idem). And the reason why is the following:

The female gender must ascend for there to be equality.

When the first Feminists visualized what they hoped to achieve, they would see the mold, the scaffold that already existed: the privileges and opportunities that men already enjoyed. They saw that men stood in an elevated position, and dreamed of reaching that position.

Let’s imagine a staircase of ten steps. The first Feminists realized that men stood in the eighth step, and that women were in the second step. There were only three ways to obtain equality.

Option B: the male gender goes down six steps, and equality is achieved with both at the second step. Again, there must be a better way for the two genders to be equal, without one of them having to decay.

There is!—Option C: the female gender is elevated six steps and the male gender stays in the eighth step. Equality is achieved in step eight of the staircase.

In this scenario, women win privileges and opportunities they did not enjoy before, and men maintain the position they have always had. It is a win-win outcome, and equality is reached.

Misandry (definition: hatred of men) is not a thing.

This is a controversial statement to make.

However, when feminists use this catchy slogan, we are completely aware of the fact that there are, indeed, situations in which men are disadvantaged by their gender. We are not disputing this fact, we are simply pointing out that, given the current reality that men hold the “one-up position” in society, true misandry does not occur and cannot occur on a large enough scale for it to merit the same amount of attention and activism that misogyny does. In other words, the current societal climate necessitates that issues of misandry are not our primary concern.

Hence, the feminist slogan, “Misandry is not a thing”.

Even so, often in the midst of conversation regarding feminism someone points out how men are left out of the discussion. This person (if not arguing from the standpoint that feminism is secretly advocating  men’s oppression) argues that if feminists wish to get men on their side, they ought to include talk about both men and women’s issues. Focusing solely on women supposedly alienates the people feminists need to ally with in order to enact social change.

This is why there is such opposition to the term “Feminism” as used to describe the movement towards gender equality. If it is a movement based on eliminating pernicious social norms and structures which disadvantage both men and women, why not call it “Equalism” or something of the like?

The answer is that feminism is named thusly to put the focus on the disadvantaged group: women. The pernicious social norms and structures are damaging to women far more often than they are to men. This is true to such an extent that in our society, the supposedly neutral human – the default – is a man. So when we choose to use the term “Feminism,” or the slogan “misandry is not a thing,” we do so intentionally to direct the focus to the group who is most often ignored, underrepresented, and harmed.

Yes, men, we need you on the side of feminism for this whole thing to work. But we do not need to mitigate our efforts to solve women’s issues by addressing misandry as much as we address misogyny. To do so would be to enforce male privilege, not lessen it. The process of achieving equality of the sexes requires men to give up their privileges, one of which is their expectation to be included in and catered to by every institution and discussion.

Feminists are not in any way advocating the systematic oppression of men by using the slogan “Misandry is not a thing.” We are not telling men that it is impossible that their gender could somehow disadvantage them, either. We are simply asserting the point that misandry, here and now, in this discussion, is not relevant. Misogyny is.

The unfortunate day could hypothetically arrive when men are the underprivileged group and misandry does merit our attention, but that day is nowhere in the near future. Those who cry “Misandry!” when they hear “Feminism!” need to stop yelling fire before someone has even lit a candle.

If I Admit That ‘Hating Men’ Is a Thing, Will You Stop Turning It Into a Self-Fulfilling Prophecy?

On the Misandry Isn’t a Thing Thing

Here is a definition of Street Harassment, courtesy of StopStreetHarassment.org:

Unwelcome words and actions by unknown persons in public places which are motivated by gender and invade a person’s physical and emotional space in a disrespectful, creepy, startling, scary, or insulting way.

There are various definitions of street harassment, but all of them specify that street harassment occurs in public, between people who do not know each other, and is a physical or emotional intrusion.  The harasser usually makes reference to the victim’s appearance or gender.

Why this term it is relevant:

According to a nationally-representative poll,

Street harassment is not a compliment.  It is, in fact, harassment, and should be treated as such.  Let’s lower the numbers!

See Hollaback, The Everyday Sexism Project, and Can I Get a Smile? to start.