It was my first day interning on Capitol Hill, and I could not – for the life of me – stop mixing up the names of the male staffers in my office. They read off like roll call at an upper class private high school: Dan, Jake, John, Alex, Tim, the works.

There was one female staffer in the office, and although disappointed, I was happy to know I at least wouldn’t be the only person with a vagina. I later found out that she was leaving the office in a couple of weeks.

The lack of women in the office came as a shock to me. I’m well aware of the mixed gender ratio of representatives in general, but I (naively) expected better from a small Democratic office.

Two former Capitol Hill staffers, Sara Lonardo and Elizabeth Whitney, apparently also saw the same issue. In July of 2018, they launched the Women’s Congressional Staff Foundation, which awards scholarships to women who might not otherwise be able to intern on the Hill. Both women started as interns and are hoping to get diverse women into offices.

“We’re hoping to open up that world to a broader class, a broader demographic who might take themselves out of the running for a career in public policy,” Whitney said.“As I’ve gotten further along in my career, I have just always shared this passion for helping young women through that very vulnerable time in your life, which is finishing college and starting out in your career,” Whitney said. “We’re really going to be looking for those women who are at that critical path, where this is a make or break opportunity … and they are poised for success if they have that helping hand at that moment.”

Their goal is to fund about 50 young women’s internships each year.

As you might have guessed, the average “hilltern” is not only male – he is a white male. 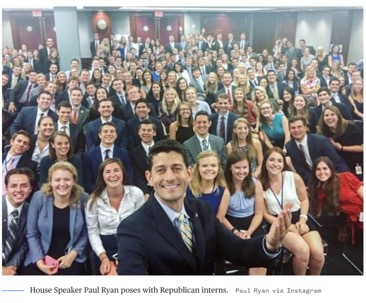 Statistically, those who can afford to work for free for an extended internship tend to be white students able to lean on family finances for a few months.

Congressional interns can expect to spend an estimated $6,000 of their own money for housing, travel and food during an internship in the nation’s capital. Interns on Capitol Hill have shared horror stories on how they made it by, including skipping meals and walking miles in the rain.

The issue of diversity (or lack thereof) in DC interns – or unpaid interns in general – has been drawing criticism nationwide, specifically by those pushing for paid congressional internships. Among supporters is newcomer and democratic icon Alexandria Ocasio-Cortez, who has recently drawn attention for vowing to pay her interns $15 an hour.