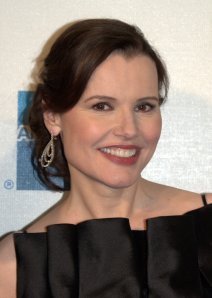 Davis, 58, graduated from Boston University’s College of Fine Arts in 1979 to pursue acting. She won an Oscar for Best Actress ten years later for her role in “The Accidental Tourist.” She is also known for her work in “Beetlejuice,” “A League of Their Own,” “Stuart Little,” and was nominated for another Academy Award in 1992 for her character in “Thelma and Louise.”

“I always wanted to play characters who were in charge of their own fate,” said Davis in a press conference at the event. “When [“Thelma and Louise”] garnered such a big reaction from women it made me think much more consciously about what the women in the audience would think about my characters.”

Davis started the Geena Davis Institute on Gender in Media in 2004 after watching family movies with her daughter, who’s now twelve, and noticing a severe under-representation of female characters. The non-profit research entity studies gender representation in film and television, particularly media aimed at young audiences. It works to reduce stereotypes of women by bringing attention to disparities in family films. Research from the last decade showed fewer than 1/3 characters in family films are female, and more than 95% of C-suite characters are male.

“I think it’s incredibly important, the images of women that we see,” said Davis. “If we’re showing kids female characters that are stereotyped, sidelined, or highly sexualized or not even there, we’re sending a message to kids. It’s basically saying that women and girls aren’t as important as boys.”

The institute is now the leading source of research on gender depictions in media. In 2013, it partnered with the United Nations Entity for Gender Equality for a global study that will be presented at the Second Global Symposium on Gender in Media in the Fall of 2014.

“The ratio of male to female characters in film has been exactly the same since 1946… things just haven’t changed,” said Davis. “I’m hoping that finally this last year where “Hunger Games” was number one and “Frozen” was number four, we actually might get some momentum.”