This set of posts covers my biking along parts of the USA’s East Coast during the summer of 2022.  Links to various parts of the trip are here.

Details on the 1 week warm up trip:
Biking in South Florida
Cycling through the Florida Keys

Introduction:  For those of you who do not know me, last summer (2021) I was hoping to bike the entire East Coast of the United States, from Key West to Canada.  That trip didn’t happen because of a number of problems.  For example I put myself in the hospital with heat stroke after pedaling too much during a heat wave.

I am concerned about heat stroke again.  Tomorrow is the first day of doing serious mileage on the bike and the weather forecast is 92 degrees Fahrenheit, with 65% humidity and a 10 out of 10 on the U.V. index.  In simple terms, not a great day for doing exercise outside.  Instead, it is a good day to be lying by the pool with a cool drink.  Hopefully, the weather will be better later in the week.

Here are some Frequently Asked Questions (FAQ) about this trip .

What is the goal?  In May I did a short trip that covered Fort Lauderdale to Key West, Florida.  It is now July and I am starting in Norfolk, Virginia and pedaling north.  The final destination depends on the weather and how I am doing.  The heat and humidity this summer is very high and my first goal is to live.  My second goal is to bicycle a long distance.  Hopefully, I will make it at least to New York City.  After New York I will figure out if I am pedaling home to Boston or onward to Canada.

Is there any help?  There is no help.  I have no support vehicle, no one carrying my luggage.  Given this is the East Coast of the U.S. there are a number of friends and relatives along the way in case things go sideways.

How much gear are you carrying?  I have a backpack with about 15 pounds of gear.  I also have a tool bag under my seat that has about 2 pounds of repair equipment.  Most of the 15 pounds on my back are electronics, like a laptop and a spare phone, plus Gatorade powder and some emergency food supplies.  At the start of each day I put in the pack and on the bike another 5 pounds of water and food so I am carrying about 22 pounds.  That doesn’t seem like much for the first hour but at the end of the day it can be crushing.

Are you camping?  I am “credit card camping.”  This is a funny way of saying that my plan is to stay in motels and hotels along the way.  At my age, a nice shower and a comfortable bed go a long way.

Is the trip fun?  Most bike trips are not fun in the moment.  It is hot and tiring pedaling hour after hour.  Plus there are some roads that are downright scary.  However, there are two kinds of fun; in-the-moment and after-the-fact.  Long distance cycling is more after-the-fact “fun.”  I get a lot of satisfaction out of covering long distances on my own power.

Do you have an e-bike?  An e or electronic assisted bike takes the challenge out of long distance pedaling.  If I just wanted to cover the distance, I could have driven a car.  I am pedaling an “endurance bike,” specifically a Trek Domane SL-5, which I purchased in 2018.

Any advice?  A few years ago I rode by myself across the United States for the second time.  At the end of the trip I wrote a short note to myself outlining the three mistakes I made on that trip.  First, do not cycle long distances alone, because it is boring.  Second, do not have a hard end-date, because it forces you to keep going when you should really stop.  Third, do not use Google maps each night to plan out your route for the next day.  Google has no idea if you are riding a road bike, designed for pavement, a gravel bike for unpaved roads or a mountain bike for wild terrain.  Since I am riding a bike designed for pavement, going on gravel or wild paths is not fun.  I wish I wasn’t making the same three mistakes again, but I guess some people never learn.

The route I hope to do: 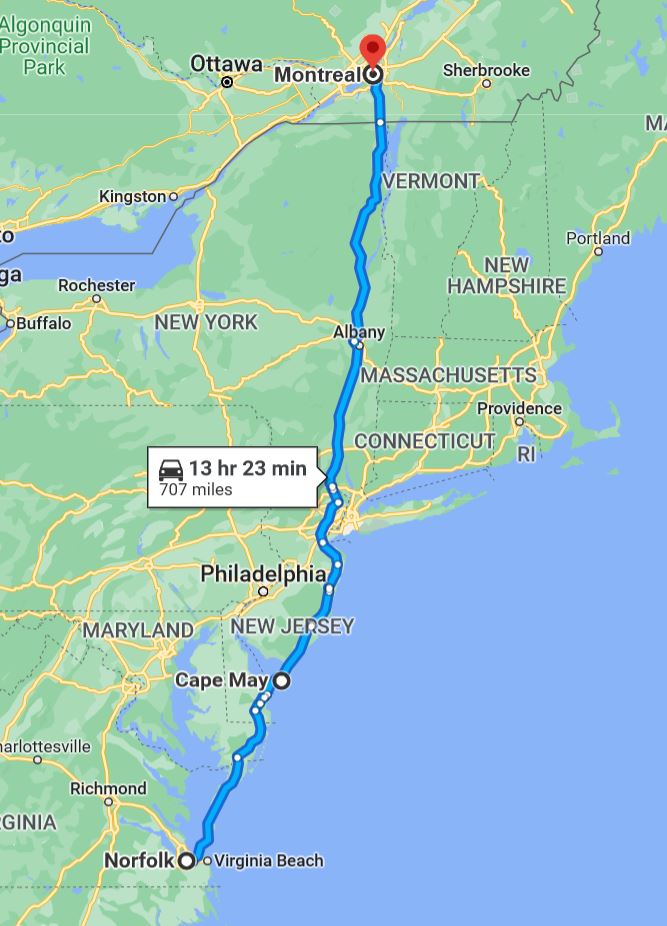