I teach a lot of courses.  One of my favorites is Managerial Economics.  In this course I teach MBA’s how to make the most profits for their business, without breaking laws or societal rules.  A key point in the course is that once you have a clear objective, like making profits, it is easy to optimize and achieve your goal.

My goal when biking across the USA this time is to expend as little energy as possible.  Now it is easy to do this by breaking the rules, like getting an electric motor to help power through the mountains.  However, I want to see if I can do the ride under my own power.  To reduce the effort of biking over 3,000 miles I decided on three objectives, which helped me pick an optimal route . 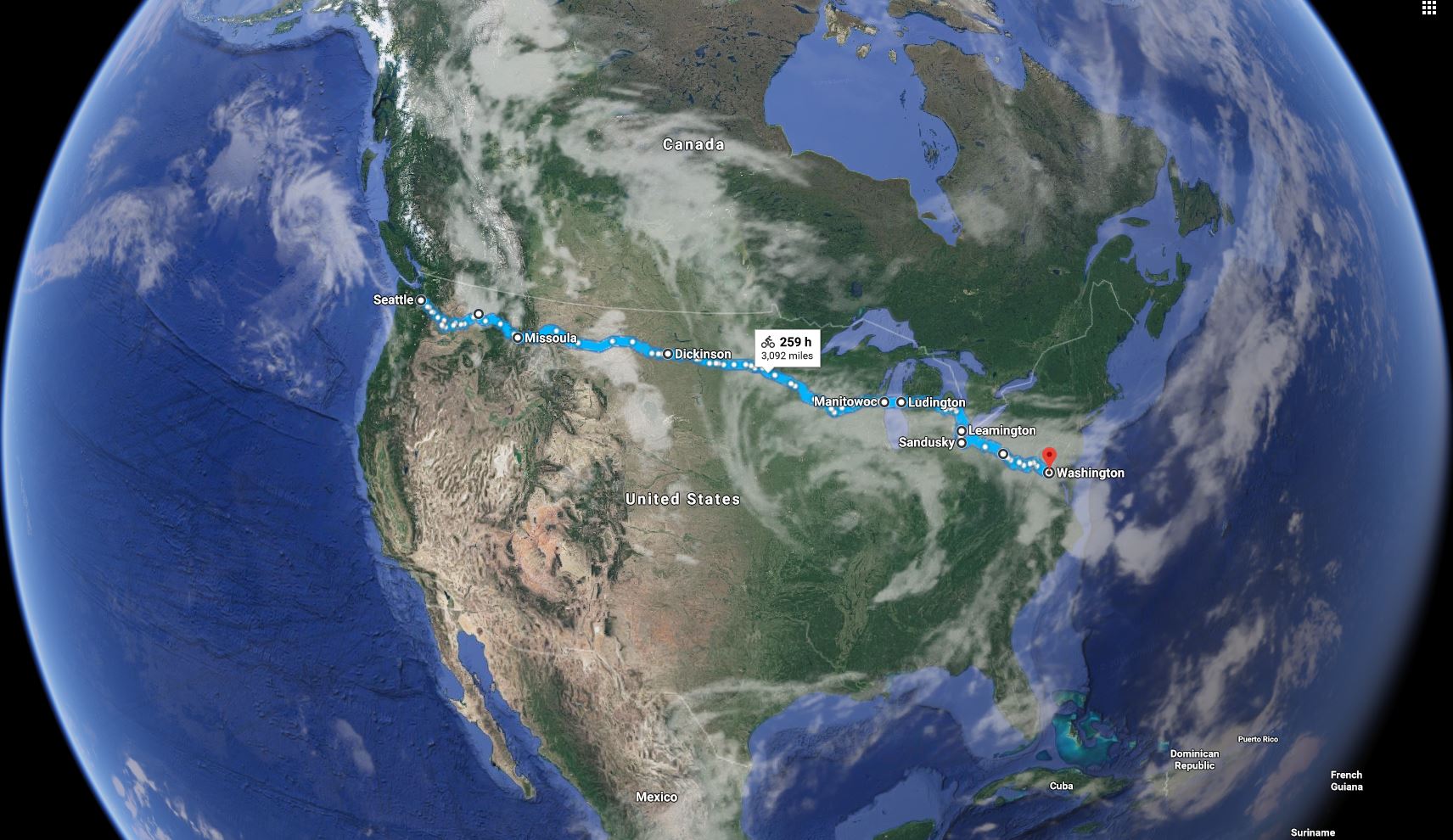 I picked Seattle as my starting point.  This violates my third rule since Seattle is a large city, but I need a city with a good airport to start off the trip.  Seattle has two other advantages.  First, maps show I can get on a protected bike path and get out of town within 30 minutes.  Second, and more importantly, I can get through the Cascade Mountain range by pedaling through the two-mile-long Snoqualmie railroad tunnel.  I still have to pedal uphill 2,600 feet from sea level to get to the tunnel but I am expecting this to be a lot easier than the other ways of crossing the West Coast’s mountains.

Where exactly am I going?

Google Maps currently allows people to enter up to ten places.  Here are my top ten picks for generating the route.  Some places, like Manitowoc, you might not know, but they are quite important. 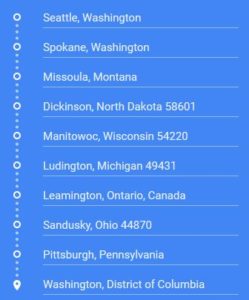 I start in Seattle and then have to cross the Cascade Mountain Range and eastern Washington desert.  If all goes well I end up in Spokane.

From Spokane the goal is to cross the Rocky Mountains.  Missoula, Montana is nestled in the heart of the Rockies.  By the time I hit Dickinson, North Dakota most of the hard climbing should done and I am in the plains.

The next major stop is Manitowoc, Wisconsin.  Manitowoc is where a ferry leaves to cross Lake Michigan and docks in Ludington, Michigan.  Taking the ferry across the lake means I don’t have to bike through Chicago and its suburbs.  I then cut across the upper peninsula of Michigan and dip into Canada.  Doing this means I avoid biking through Detroit.  There is another ferry from Leamington, Canada to Sandusky Ohio, which gets me across Lake Erie.

From Sandusky I pedal to Pittsburgh.  Yes, going to Pittsburgh violates the third rule again but there is a great bike trail from Pittsburgh to Washington, D.C. that has a number of old railroad tunnels that cut through the Appalachian Mountains.  I have to go to Pittsburgh because the trail starts downtown.

In Washington it will be time for a glass of champagne and a celebration.  Then after a few days of resting it will be time to think about the next big project or adventure.