I arrived at Logan International airport feeling more excited than tired after my nearly-24 hour journey. Being the klutz I am, I managed to find myself in an awkward situation just minutes after I got out of the airport.

After a great struggle to load and push out all of my luggage (two suitcases weighing a little over 50 lbs each, another two weighing about 60 lbs and my backpack) from the airport, I was relieved when I spotted my friend who’d come to pick me. In my elated state (I was meeting him after two years), I left my trolley on the pavement to go over and say hello. Bad idea. In the 10 seconds that I was away, my trolley, with all its mass, rolled down the sidewalk and crashed into a parked car causing a rather bad dent. Oopsy. Little did I know, the week that was to follow had more awkwardness in store for me. 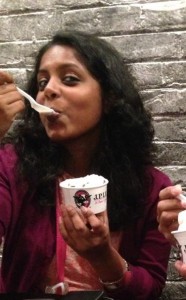 The day I moved in, I lugged most of my luggage from the T to my apartment in the sweltering heat. Honestly I was prepared for the cold but NOT for the heat! I then had to attend the ISSO orientation for new international grad students. When I got home, I noticed my comb was missing. There were some women at our apartment helping us clean and I asked one of them if she’d seen it. She didn’t exactly understand what I was saying, but she did point to the bag of trash she’d just collected. Apprehensively, I took a peek in it. Did I find my comb? Yes I did, but not just that. They’d thrown out a whole bunch of my other stuff including my phone charger, my brand new water bottle, a shoe bag and the pair of socks I’d just taken off!

Later that week, at BU’s College of Communication (COM) building, I mistook a professor for a student and asked him what he was majoring in. At J.P Licks, just as I began relishing my mint chocolate yogurt, my roommate pointed out that I’d picked up a spoon from the used spoons bin.

Nevertheless, my first week has been great. I like all my classes, I made some friends and ate some good stuff. I look forward to the fall and winter, I just hope I don’t embarrass myself too much, as much fun as it may be in hindsight.