“I’m just a fancy trash man”, says Adam Mitchell of Save That Stuff, a sustainable waste and recycling service based in Charlestown, Massachusetts. Taken at face value, this might seem an eccentric statement, but at BU’s Sustainability Festival, Mitchell was in good company.

The event, which took place last Thursday, was presented by Sustainability@BU in conjunction with BU’s Bike Safety and Dining Services organizations.  Located at Marsh Plaza, the area was filled with tables, tented booths, students and staff. A generally placid walk past Marsh Chapel was thoroughly reinvented into a vibrant and lively festival, zeroed in on promoting university sustainability. Even our boys in blue, the Boston Police Department, were compelled to make an appearance.

There was something for everyone at the Festival, from bike tune-up’s to local meal kits, oyster shell recycling to fresh farm berries. But let’s just pretend for a minute you needed a bit more of an incentive to attend such an event. Not a problem – the promise of chicken fingers at the Raisin’ Cane’s booth, the thrill of the spin at the bike-inspired prize wheel, or seeing a fleet of Boston PD officers with bikes in tow had you covered. I’m also a sucker for a free water bottle, which were handed out in abundance from Sustainability@BU.

Surprisingly, the largest line of all seemed to be concentrated at the LED challenge station in the middle of the event. In exchange for an incandescent or compact fluorescent lamp (CFL) bulb, you received a free LED bulb in replacement. This is part of a series of ongoing “Join the Challenge” initiatives put on by Sustainability@BU in partnership with an organization called Carbonrally. Each month a different sustainability challenge is highlighted, and Carbonrally provides the platform to keep track of your challenges and progress.

Bike and pedestrian safety was a major component of the event, as was the farmers market and representation of 18 clubs comprising the BU Environmental Coalition. Members of groups such as BU Beekeeping, BU Energy Club and the BU Vegetarian Society were all present. In a discussion with a member of the Sargent Choice Nutrition Center, I learned about BU’s balanced “Sargent Choice” meals, the option to take a one-credit nutrition class, as well as cooking classes and one hour of free counseling available at the Center. 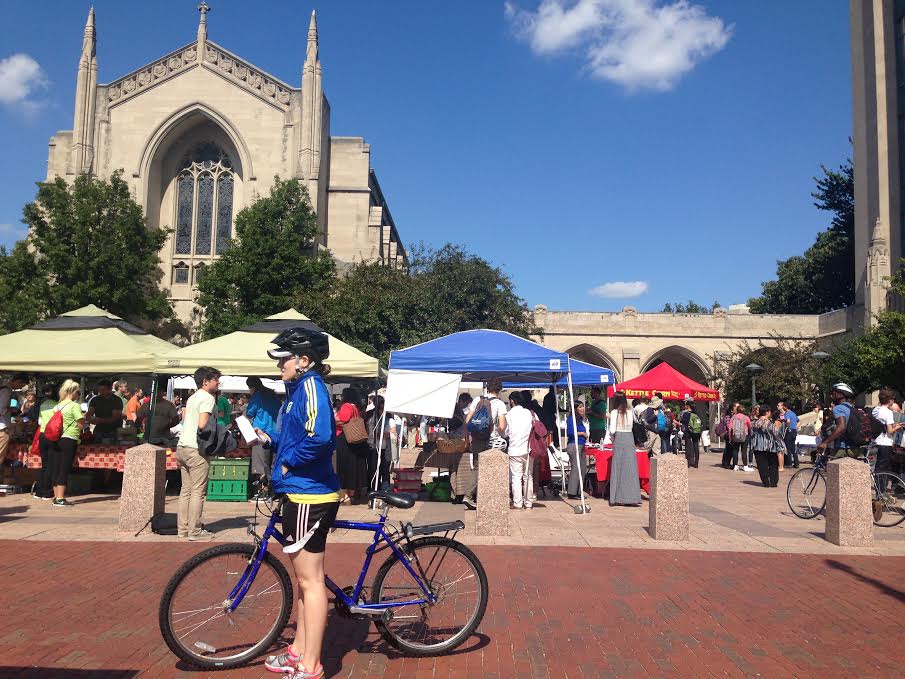 I also spoke with MassBike, a coalition advocating “Better Bicycling for Massachusetts,” partnering with numerous stakeholders to educate schools and other groups about biking safety. My favorite part of the event came in at the food (shocker). The farmers market boasted an abundance of different offerings and produce, the most impressive of which I found to be Ward’s Berry Farm out of Sharon. Apples, carrots, squash, cauliflower, raspberries and cherry tomatoes all on display in the middle of an urban campus reminded me we’re not all that far from locally sourced food.

The event had a solid turnout, and I learned a few things about sustainability as well as the countless related organizations BU offers. I’m pleased the farmers market will continue to run throughout September and October as well, on Thursdays at the GSU Plaza from 11 a.m. to 3 p.m. To find out more about Sustainability@BU, follow them on Facebook at: BUsustainability, or on Twitter: @sustainableBU.