Production I is an introductory class that every Television graduate student takes in their first semester at BU’s College of Communication (COM). Professor Geoffrey Poister, who has 15 years of experience in the film and TV industry, teaches the course.

In Production I, students start off by learning how to use a basic DSLR camera and what different lenses are used for different effects. Next, they move on to the more advanced Panasonic camcorder, which is used by professional TV crews and is good for shooting interviews. Students learn to record sound using various microphones such as the wireless, lavaliere and shotgun. They also touch upon lighting techniques and learn how to use Avid, Hollywood’s editing software of choice.

For their first assignment, students produce a silent film. The script for this project must be highly action-based. After the script is complete, students learn how to add sound to their film. Students choose to either record new music or select from the available media libraries on COM’s computers located in all the labs on each floor. 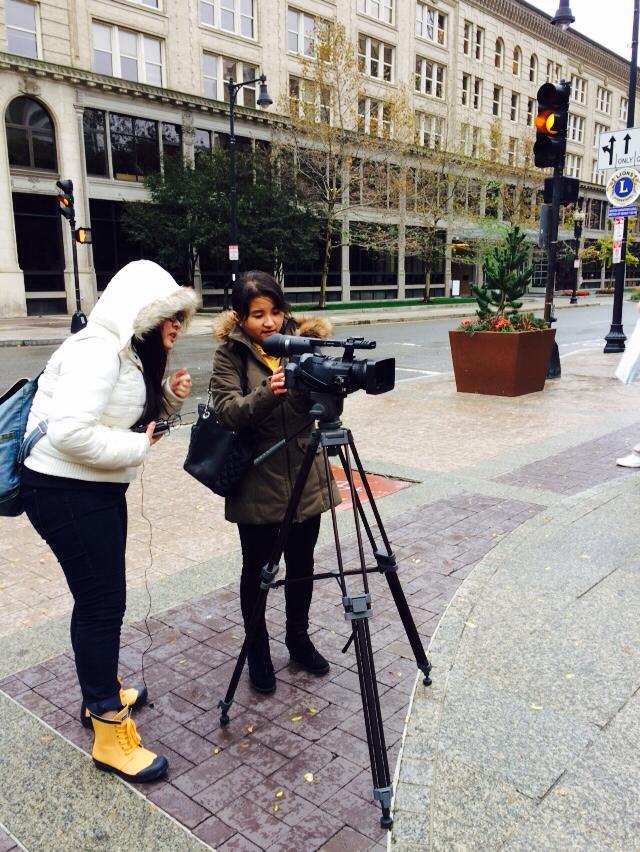 Their second assignment is a group assignment in which students have to work on a documentary—one with real people and characters. This semester, one group chose to work on a story about Professor Poister himself, as he is part of a band. “This is the course I have most fun in. Professor Poister is very funny! I was really surprised to know that he was part of a band,” said Maggie Shuting Cao, a first semester television graduate student.

Professor Poister gives his students creative leeway while giving them hands-on instruction for learning the techniques of film production. Students learn to differentiate between producing say, a more dramatic, fictional movie and one that is more ground in reality, a documentary kind of production. This way they learn two different ways to narrate stories, all in one semester.

Mohammad Behroozian, a student from Afghanistan, who took the class this semester said he really appreciated the “opportunity to test the edges of [his] creativity.” For his first project he produced a stop-motion animation. Beginning right from scratch, he built a set on his study-table. He created mannequins and gave them costumes and lit it artificially. Check out his work here!

Mohammad Behroozian says he would like to work on producing educational television material for children back in Kabul once he graduates from BU’s College of Communication.

Want to learn more about the programs offered by COM’s Film/TV department? Visit our website here and find out how you can apply to one of the graduate programs here at COM.