As the journalism community grieved the loss of David Carr last evening, students at COM had to put emotions aside and do what they are being trained to do in the face of such a happening; report.

The recent couple weeks have been unfortunate for the world of journalism; the killing of two Japanese journalists by ISIS, Jon Stewart stepping down from the daily show, Bob Simon of CBS’s 60 Minutes passing away and last evening, David Carr.To us at COM, he was not just another journalist. He was one of our professors, one of us.

Within minutes of hearing the news about his death though, students at the Boston University News Service (BUNS) and The Daily Free Press sprung in to action.

“Bulletin: There’s chatter on Twitter that David Carr has died. We need to confirm or debunk this. If it’s true, we need to report. If it’s not true we need to report how this happened.” posted Prof. Michelle Johnson on the Facebook page for BUNS contributors.

Within an hour of her posting, there were over a 100 responses in the comments section. Students had reached out to current professors, the Dean, students taking his class this semester and others who had taken it previously. The obituary that came out from this teamwork can be found on the BUNS website.

Jamie Bologna, a recent COM grad, who had taken Carr’s class last semester,tweeted about the loss. 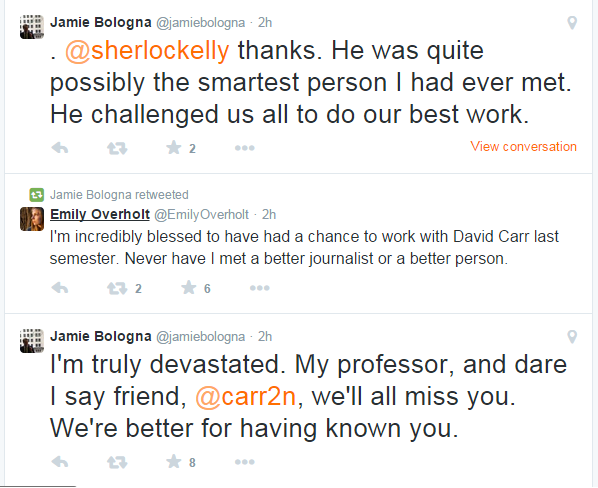 Jamie Bologna’s tweets from the night of 12th Feb, ’15

Prim Chuwiruch who took his course, Press Play, in the fall of 2014 said, “David Carr went beyond being just a professor. He was a mentor and a friend in times when he didn’t need to be, but he did anyways.”This is what the syllabus for his course Press Play looked like. I’m a second semester grad student at BU and I’ve not seen a syllabus from any other course look anything like this.

The Daily Free Press put together a page overnight dedicated to the late professor.  COM alumni Megan Turchi and Justine Hofherr who both took his class wrote this piece for Boston.com. More coverage on the life of Carr and his demise will be up on BU News Service over the next couple days.

Despite being sad for the loss COM has suffered, I’m honestly grateful for the experience of working in a newsroom with such great teams. These are essential lessons that we learn for our lives as journalists. And I’m glad I’m learning it here at COM.