The Redstones Film Festival is held each spring semester by the Film and Television Department at COM. The festival showcases works submitted by both graduate and undergraduate students. Films are awarded based on several categories: best film, best cinematography, best screenplay, best editing, best sound design, Fleder/Rosenberg best short screenplay; the festival is basically like the Oscars of Boston University.

This year’s 1st place winner and the winner of Best Screenplay, was Bryan Sih (COM’14.)  His film Winter/Spring, was about a Spanish-speaking couple working on a farm.

What inspired you for this film?

Lots of things. I started thinking of parenthood after reading Sherwood Anderson’s The Untold Lie. I began questioning the bringing of a child into the world when adults are just as confused as a child. Immigrants always inspire me with their bravery and often-tragic necessity to seek an alien world, and so I included that in the film. Then there are the actors themselves, since the film relies on improvisation, they are responsible for a lot. Unfortunately, I wrote the whole script for the spring. When we scouted the farm, it was covered in three feet of snow that refused to melt so I rewrote the film on the spot.

How long and what type of preparation did this film take?

I started preparing the script in December and we were still writing into April. I like to lock myself into a room, get a large piece of paper and write the scenes in blurbs all over the page. It usually lasts a few days and I am constantly rewriting it. I am a terrible writer, so the real preparation begins with the actors. I also have the actors work beforehand. For Winter/Spring, they drove up to the farm together without the crew and when they arrived on set, had formed their own private language. It made them come across as a self-enclosed unit. 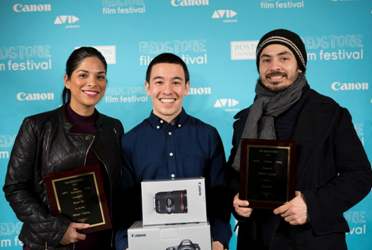 What is the message that you wanted to portray in this film?

It was more a question: what does it mean to be ready for parenthood? It is a film about being on the cusp of great life change and not fully being ready, but learning how to work through this struggle together, with tenderness, forgiveness and communication.

You don’t speak Spanish, but your film is in Spanish with English subtitles, why is that?

I grew up in a diverse town with many immigrant families, they’re part of my world. The couple in this film is isolated somewhere in North America, and they’ve retained their spoken language. The film focuses primarily on their relationship actually, not ethnicity. Also, directing in a language you don’t speak makes observing the things that matter all the more vivid.

What does the future entail for you now that you’ve won the Redstone?

The Redstones gave me a camera to shoot more films with, so I hope to be more productive. I’ve learned so much from my experience with Winter/Spring and can’t wait to dive into the next project.