At the General Assembly training center on Summer Street, a networking event kicked off International Women’s Day for over fifty attendees. The Women in Tech Breakfast hosted three speakers who shared their own experience of sexism in the workplace, how they overcame it, and how they’re using their positions to change to game.

Gabriela McManus of Drizly, Roxanne Tashjian of Monster, and Sanam Razzaghi Feldman of Rapid7 emphasized to a largely female crowd–with just three men in the audience–that changes can be made in small steps, as long as women advocate for ourselves and our values, while creating a community of support.

They pressed issues such as Referral System hiring, which encourages the consistent employment of similar candidates with similar backgrounds and experience. Job descriptions also pose a problem, and can be redesigned to be more inclusive.

Mei Li Zhou, Partnerships Specialist at General Assembly, explained that the importance of collaborating with the International Women’s Day campaign lies in shared goals. For these two groups, a focus on “thought” is key: “The International Women’s day team has been a major player in shedding light on these issues and their #BalanceForBetter campaign really resonates with our goals of promoting a workforce that is diverse of thought, gender, and race.”

Events like the Women in Tech Breakfast are not only held for women on International Women’s Day, but for everyone who needs a leg up in their careers year round. They enable people who struggle to advance their careers to share concerns in a community of support. For Zhou, the event was, “from beginning to end, a very safe and warm environment where women can connect and share their struggles.”

In today’s media, we have seen many realistic women enter our screens. Film and television production companies are finally seeing the value of creating three dimensional, complex female characters. Now, the flaws of these female characters are central to their behavior, which is quite different from the past where women were either seen as perfect or as victims. In this new era of media and female representation, we are beginning to accept women for their flaws. Women, just like everyone else, are humans, and are therefore flawed as well.

On December 19th, 2018, I confronted my middle school bully. And when I say “confront,” I mean I wrote a lengthy message on

Facebook. When I say “bully,” I mean a girl that loudly insulted me in my 8th grade English class. It’s not the most conventional bully story, but nonetheless, it affected me in more ways than just one.

Let me set the scene for you. I am 13 years old, wearing an ill-fitting t-shirt and low-rise jeans. My English class smells as if every adolescent drowned themselves in expired Axe body spray. When I stood up from my seat, “Susan” shouted an insult at me pertaining to my appearance. Looking back, I can almost justify the remark since I did take fashion advice from the early 2000s, despite the fact that it was 2012.

The class grew quiet. All eyes were on me. I felt like a street performing monkey who had just failed the magic trick. From what I remember, I laughed awkwardly in order to appear as if I were in on the joke.

Even though this might seem insignificant, this moment stuck with me. As the years passed, I grew more curious as to why Susan did this. We were never enemies, friends, or even frenemies. We barely knew each other. Of course, I can now attribute her anger to the awkward years of middle school, or maybe to the fact that she needed an outlet for that anger. But I wanted an answer.

So, I found her on Facebook and decided to send a message. I attempted to write the best message a person could write in this situation—unaccusatory and understanding. I had immediate senders regret, but there was no turning back.

A couple days pass and I get a response:

Hey love, even though I may not remember I still want to apologize. That was very rude of me and I can only imagine how bad my comment made you feel I am very sorry. I hope you know that you were beautiful and talented and all that you do always believe in yourself and strive for your full potential.

That wasn’t the response I had wanted.

To be frank, I expected too much from the situation. I can’t deny that her message was kind, but it was also safe. And safe in the way of disingenuousness. I realized that the message was in response to drama from 8 years prior, and that I shouldn’t have been surprised that I didn’t receive as satisfying of an answer as I had hoped for.

I may never get a why from Susan, and that’s perfectly fine. She doesn’t owe me any explanation for something that was trivial middle school angst.

I think what struck me was the overwhelming positive support I received by others on Facebook. No one questioned my morals. There were just blind compliments. The positive reinforcement, however nice it was, felt strange.

It felt strange because I am not a perfect individual. I am flawed. I am not the airbrushed and groomed femme-fatal of cinema’s past. I am not a victim. I, the bullied, was also a bully. I have been confronted by someone who I had bullied 10 years ago. Fortunately, we were able to talk, move past it, and build a strong friendship.

One slogan used by many feminists is “Babes Supporting Babes.” To many people, it is used to support other women. And while I am wholeheartedly for female empowerment, this phrase is support at a surface level. Support should not mean blind reassurance of our 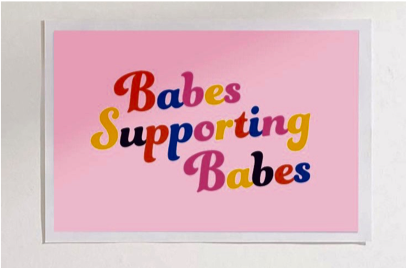 beauty and our talent, as Susan had told me. Support is accepting the flaws that are found within us and grabbing them by the throat. We must embrace our flaws through moments of self-conflict and self-reflection–– like the urge to message a bully at 3am. A babe supports another babe by challenging her to overcome the obstacles that society brings.

Women are taken advantage of when they are seen as perfect. Women should be seen as flawed individuals who have to prove themselves just as much as the next person. For decades, the image of the “flawless women” was an excuse to see her as inferior–– “The flawless must be dumb.” I want to be challenged as a whole being, even by my flaws. I find that empowering. We get enough of the superficial from the posters in corny teenage magazines. It’s time for true support.

Q: What does woman empowerment mean to you?

A: Women empowerment for me includes the liberation of the various intersections of gender from trans gender and nonbinary individuals to the roles of that race and financial strains placed on us.

Q: What does being a woman mean to you?

A: Being a woman is holding all the power in the world but not being sure how to use it.

Q: What do you bring to the table when it comes to women empowerment?

A: I bring to the table a passion to see the world be a better place.

My favorite color is turquoise. I realize this as I allow my feet to dangle off the side of a high cliff overlooking the Mediterranean Sea in Paphos, Cyprus, where the goddess Aphrodite was supposedly born out of the seafoam.

My mind flashes back to a few summers ago, when I had my first camp counselor experience at Agios Nikolaos Tis Stegis Camp in the Troodos Mountains of Cyprus. I remember seeing my cabin for the first time—a group of twelve middle school aged girls, their faces resembling Cyprus’ long history of colonization. I take a moment to reflect how even though these girls may have Venetian, Assyrian, and/or Phoenician ancestry, we all identify as Greek Cypriots. We are all unique patches of that turquoise Mediterranean Sea.

This moment of reflecting upon the mixing of genotypes in Cyprus is contrasted as my mind reels back at the memory of ninth grade French class. My French teacher would continuously dock points off of my exams because even though I answered correctly, I was somehow not good enough. Growing up in Easton, Massachusetts, I was often the darkest skinned student in my class. Some people thought I was Indian, and others guessed Egyptian. I tried explaining to my French teacher that my favorite color was turquoise, that I was just one example of what a Cypriot looked like. I desperately assured her that my mother was pale with green eyes, that Cyprus was actually a White European country, that my olive skin tone was not a threat. But my dark curls and brown eyes did not fool her prejudice.

I then remember my first camp counselor experience again. Irene stuck out. Her mother was Philippino and her father was Cypriot. Her mother left her at a young age. I remember comforting Irene as she cried herself to sleep every night. Every morning, I assured her that she is loved, and that her nightmares would not come true. When Irene felt inadequate to include herself in the company of her peers, I told and retold Irene why my favorite color is turquoise. We are all drops of life in the Mediterranean Sea. No matter our specific shade of turquoise, we are all made of two hydrogens bonded to one oxygen.

I learned everything I taught Irene from my first-hand experiences. When I was in second grade, a boy named Jacob started pretending to sneeze when he came near me, claiming that he was “allergic to Black people.” I sat there stunned and confused, because prior to this experience, I thought I was White. I wish I knew that in a few more years, I would discover that my favorite color is actually turquoise instead of naïve red.

Before my first camp counselor experience ended, Irene entrusted me with a heavy secret. This young twelve-year-old girl has endured years of bullying for the most ridiculous, blood-boiling reasons. Irene has constantly been told by her fellow classmates that she is dirty, an outsider, someone who was not—and will never be—good enough. A few months prior, Irene attempted to commit suicide, but stopped herself when she realized the substantial physical pain caused by stabbing herself in the hand with a sharp kitchen knife. It was in that moment that she considered the emotional pain her grandmother would have to endure seeing her beloved grandchild dead. I have not talked to Irene since that summer, but I hope she remembers why my favorite color is turquoise.

As my mind focuses back to my present task of writing my honors thesis, I take a more analytical approach to my Cypriot identity and heritage. For centuries, populations have interacted and mixed, creating one Cyprus filled with diversity, yet unity.