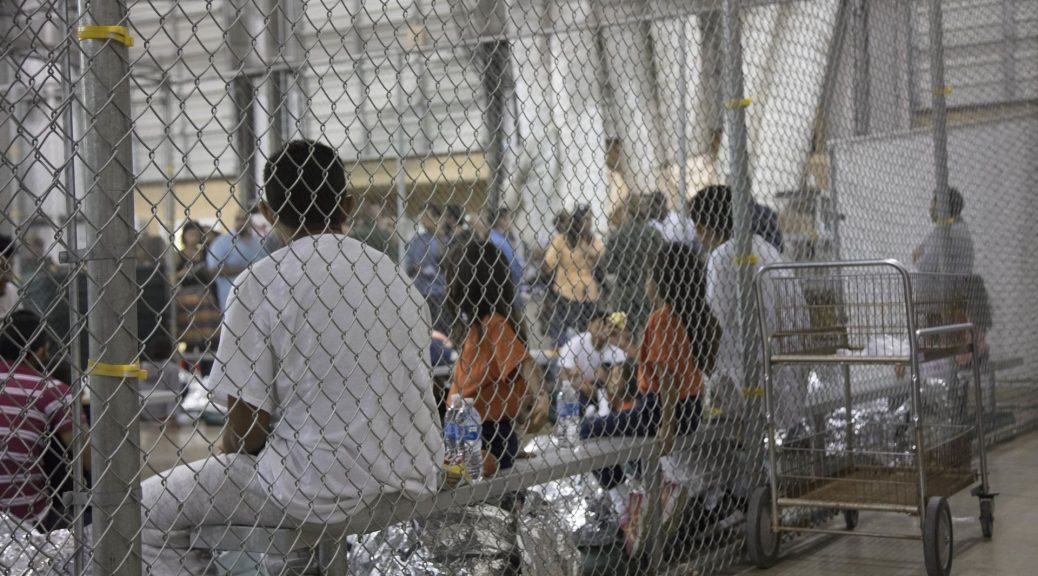 I’m sure you’ve already heard about it. Families have been discriminated against, detached, and detained because of their immigrant status. According to the American Civil Liberties Union (ACLU), “more than 2,300 children have been forcibly taken from their parents.”

The vast majority of these children were brought to the U.S. by their parents in search of protection from the peril of their native countries. “Eighty-eight percent of detained families have demonstrated to a DHS asylum officer that they have a credible fear of persecution if deported,” reports the ACLU.

President Trump has never been a fan of immigrants — he has consistently shown apathy, disapproval and repudiation of people of color. He has attacked Latinos, Muslims, Black women and men, and other POCs. We cannot forget that a large part of his campaign to “Make America Great Again” included building a wall between the United States and Mexico. Then, it is not surprising to see stricter measures being taken at the border. When Attorney General Sessions announced the “zero-tolerance policy” — which presumed that every person coming into the border would be seen first as a criminal, and second as an asylum seeker/refugee — this led to the separation of children from their parents, and the administration gained immediate rejection worldwide, as well as immense national backlash.

At the time, President Trump blamed the Democrats’ unwillingness to approve the wall for the separation of families. On June 15th, 2018 he tweeted, “The Democrats are forcing the breakup of families at the Border with their horrible and cruel legislative agenda.” He continued, “Any Immigration Bill MUST HAVE full funding for the Wall, end Catch & Release, Visa Lottery and Chain, and go to Merit Based Immigration. Go for it! WIN!” These tweets foreshadowed the changes that would alter the course of many lives and change the face of American enactments.

The Democrats are forcing the breakup of families at the Border with their horrible and cruel legislative agenda. Any Immigration Bill MUST HAVE full funding for the Wall, end Catch & Release, Visa Lottery and Chain, and go to Merit Based Immigration. Go for it! WIN!

After being pressed and criticized for days, President Trump issued an Executive Order on June 20th, stating he no longer mandated the separation of families; however, he is still pushing for stricter immigration laws and continues to make references to his beloved wall. Additionally, he has not addressed family reunification issues.

The order reads, “It is the policy of this Administration to rigorously enforce our immigration laws. Under our laws, the only legal way for an alien to enter this country is at a designated port of entry at an appropriate time. When an alien enters or attempts to enter the country anywhere else, that alien has committed at least the crime of improper entry and is subject to a fine or imprisonment…”

He has posted various tweets since then, condemning Democrats for interfering with his plan. His plan being to “cut the number of legal immigrants [entering] to the U.S. by 50% over the next 10 years” based on the proposals he’s backed, according to an article on BBC News posted on June 21st. Recently he jabbed at Democrats saying, “It is unfortunate that Congress’s failure to act and court orders have put the Administration in the position of separating alien families to effectively enforce the law.”

Measures have already been taken to make room for even more detention camps for immigrants, now on military bases. A report by BBC News published on June 23rd presents that the U.S. military “had been asked by the government to get ready to house up to 20,000 immigrant children.” These efforts actually add to the expenses that relate to immigration. The report stated, “The Navy memo estimates the force would spend $233 million (£175m) to run a facility for 25,000 people for six-months.”

However, the most difficult cost is the psychological cost children are paying. NBC News reported on June 28th, 2018 that even after the Executive Order to no longer separate families, “immigrant children as young as 3 are being ordered into court for their own deportation proceedings.” This seems inconceivable, but it “is not a new practice.”

More than 2,000 children will most likely be shuffled through court proceedings, despite the deep psychological trauma they have faced. This is especially dangerous because “the parent might be the only one who knows why they fled from the home country, and the child is in a disadvantageous position to defend themselves.”

The trauma that these children faced in their home country, followed by a most-likely difficult journey to the U.S., then a gruesome detainment and separation from their families, and now the burden of representing themselves in court make for a situation that Dr. Bernard Dreyer of the NYU School of Medicine deems “unconscionable.”

The NBC report explains a case of an attempt at policies of unification: “A federal judge Tuesday night commanded the White House to reunify families within 14 days if the child is under 5 and 30 days if the child is older. The Justice Department has not indicated whether it will appeal. Attorneys who are involved in the cases said it’s unclear how the judge’s order will work in practice, and when and how it could take effect.”

While there is certainly efforts being made by attorneys and judges to reunify children with their families, there is nothing being done by the President.

The Department of Health and Human Services reports that they are trying to unify a child with their parent or a sponsor, but did not specify how long this would take. “More than 2,000 children who were separated from their parents at the border have been dispatched to the far corners of the nation and to care facilities and foster homes,” the NBC report explains.

Moreover, becoming a sponsor for these children is an increasingly difficult feat, which leaves children abandoned and still separated. Rachel Prandini, an attorney apart of the Immigrant Legal Resource Center, explains that “finding a sponsor is more difficult now given recent fears that stepping forward to accept a child could trigger a sponsors deportation.” In April, the Department of Health and Human Services required that sponsors submit fingerprints and go through a criminal background check in order to “protect the child.”

The New York Times wrote a piece about José, a 5-year-old child whose “father had been arrested and taken away after they arrived at the United States border in El Paso.” José now stays with a foster family/sponsor.

José was “handed over” to a foster family, carrying “two small pieces of paper– one a stick-figure of his family from Honduras, the other a sketch of his father.” At the point of reunification between the child and his foster mother, Janice, “he refused to take her hand. He did not cry. He was silent on the ride ‘home.’” Janice explains that “the first few nights, he cried himself to sleep. Then it turned into ‘just moaning and moaning.’”

His foster family explains that “a day has not gone by when the boy has failed to ask in Spanish, ‘When will I see my papa?’” The family “tell[s] him the truth. They do not know. No one knows.”

The foster family explains that of the 12 children they have fostered in the last two years, “José is the first child who crossed the border with a parent, rather than alone, then was forcibly separated and left with no ability to contact them.”

The article reports that earlier in the week of it’s publishing, “José spoke with his parents for the first time since their lives diverged. The phone calls were separate: His father remains in detention, and his mother is in Honduras.”

Janice explains that although the calls were much needed, “they changed everything. Somehow, it had sunk in that there was no way of knowing when he would see his family. ‘It triggered all the separation trauma again’… [when] he erupted in anger, screaming and crying at the kitchen table for almost an hour.” Janice says that after he calmed down, “the boy collapsed on the kitchen floor, still sobbing ‘Mamá, Papá’ over and over.”

The pictures he drew of his family are below. 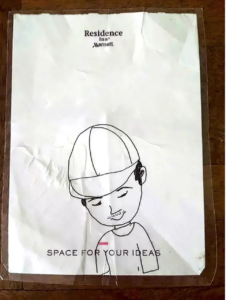 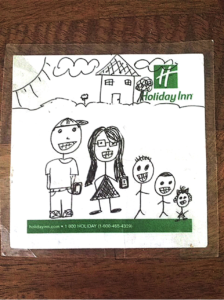 While the Department of Homeland Security Secretary Kirstjen Nielsen claims “there was no separation policy,” there clearly is a huge separation/reunification problem for immigrants and immigrant children right now. Even after the Executive Order to end family separation, there has been “‘no evidence of any system that has been put in place by the government,’ according to Wendy Young, president of Kids in Need of Defense, a group that provides legal assistance to unaccompanied migrant children,” reports USA Today.

The USA Today report explains, “it wasn’t until last week that the federal government began issuing identification numbers to families being separated at the Border…” Before this process of assigning identification numbers, attorneys acted as “private investigators… look[ing] for clues, such as a child’s date of birth, or their alien-registration number, and start[ed] pulling those threads to find the parents,” Wendy Young explains.

As feminists, it is absolutely integral to uplift and empower not only women, but people. We bleed the same blood, speak the same languages, and have the same hopes and dreams. No human being is illegal. Period.

Hoochie stands with immigrant mothers, fathers, children, sisters, brothers, aunts, uncles, and grandparents. We disapprove of President Trump’s severe take on immigration and the racism, xenophobia and bigotry that fuel it.

We believe in unity, inclusivity, and human rights. We hope that you will join us in taking a stand against President Trump’s prejudiced agenda.

Ways you can help:

Call your local senator to defund the Department of Homeland Security which supports the detainment of families and ICE. Click below to go to a site that shows you how to do that step by step: How to Call My Senator to Defund DHS

You CAN make change! Do it! Vote in any and all elections. It is our civic duty! Not registered?

A great organization to donate to right now is the RAICES (Refugee and Immigrant Center for Education and Legal Services) Family Reunification and Bond Fund. Their efforts are helping and contributing to the reunification of families.

Share your thoughts and share the factual information you find (after verifying it), to spread the word to those around you. 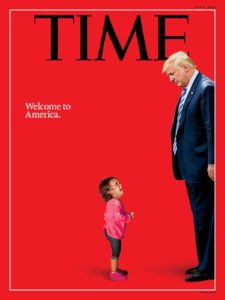 John Moore’s photo of a young girl crying as her mother was detained was edited and selected for the July 2nd, 2018 cover of Time Magazine. The photo includes the blurb “Welcome to America.”

Tom Kiefer, who worked as a Customs and Border Protection janitor for close to four years, began taking pictures of everyday objects thrown away or taken from detained immigrants. The photographs are part of an ongoing project “El Sueño Americano” (“The American Dream”), as reported by the New Yorker. 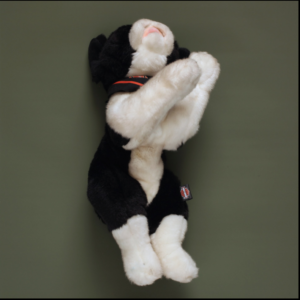 “This stuffed toy, slightly soiled in the midsection, may have been used by its owner as a makeshift pillow while crossing the desert. All personal property considered non-essential is discarded during intake” (The New Yorker). 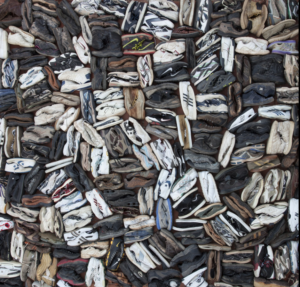 “Migrants often carry spare shoes. As with extra clothing, most personal property is considered non-essential and discarded” (The New Yorker). 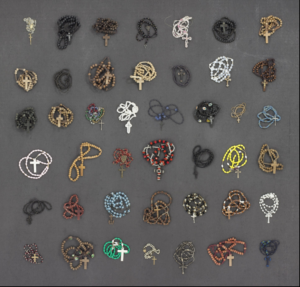 “The CBP considers rosaries to be potentially lethal, non-essential personal property, and agents dispose of them during intake” (The New Yorker). 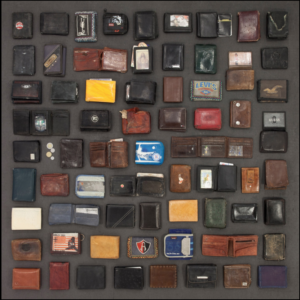 “After being apprehended, a detainee’s belongings are either placed in a property bag or remain in the backpack that he or she travelled with. Sometimes, essential items such as wallets and personal identification are discarded” (The New Yorker”).