The thing about male Lyft drivers is that I’m trapped in their car.

I’m acutely aware of it the second I close the door behind me. It’s like a palpable transfer of power that happens when I entrust my safety to a stranger. It’s a transfer that I consent to when the bus doesn’t show up on time, when I’m late for work, or when I don’t want to walk home alone in the middle of the night. However, this power is often abused by male Lyft drivers who see my vulnerable position as an opportunity to say things like:

“Is this where you live?”

“Do you have a boyfriend?”

“I would love to take you out sometime.”

“You should give me your phone number.”

“You are so [insert unwanted compliment here].”

“You have such nice [insert body part here].”

I receive comments like these more often than I ever should, but I never say anything about them, because if I reported every time a male Lyft driver made me feel uncomfortable or objectified, I’d never have time for anything else. That is, until a few days ago:

From the moment I got into the car, my Lyft driver began complimenting my appearance. It started with my eyes and how special they were. Then, it continued with how “hot” I was making his car. After that, he asked me questions, like how old I am, where I live, and if I smoke weed.

At this point, I’m beginning to feel uncomfortable, praying that no other passenger get added to my shared ride, if only to get out of his car as soon as possible. He then offered to take me back to his place to smoke weed with him, saying how bad he could “fuck me up.” I nervously laughed off the offer as we arrived at my destination. I was relieved to get out, until I noticed his car lingering at my drop-off. I left as quickly as possible, questioning what made him think any part of his behavior was ok. 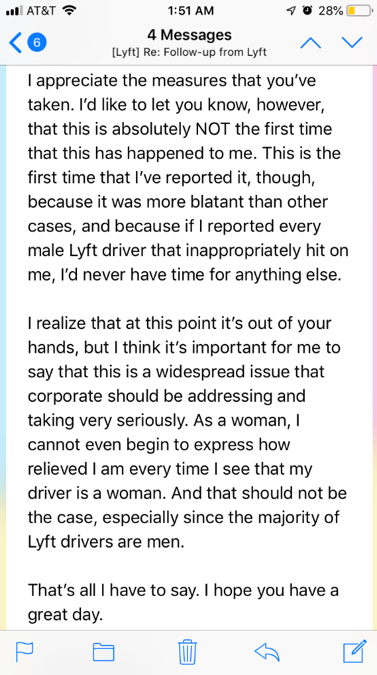 Because all I know is that it’s been days since I felt trapped in your car, and I’m still angry.

I’m angry at you for having the power to make me feel unsafe.

I’m angry at myself for not speaking up in the moment.

And I’m angry at Lyft for not doing enough to put an end to this kind of behavior.

And that’s the problem.