I grew up in the ultimate suburbia. If you walked 15 minutes in any direction, you had barely moved a neighborhood down. I grew up being driven around everywhere and then got my license and drove myself everywhere.

Growing up in suburban Florida, with a barely functioning public bus system and not even school buses in operation, I came to Boston heavily reliant on driving to get just about anywhere – and a complete novice when it came to navigating the public transportation system.

But, I quickly began to familiarize myself with the MBTA. I would now consider myself at least a little qualified to give you sometimes what I wish I had read before I moved to Boston. In this guide, I’ll talk about the basics of the MBTA and my best tips for navigation.

Boston has five main T lines, all color-coded for the section of the city it travels through: Blue, Green, Orange, Silver and Red Lines,. (Although, technically the Silver Line is made up of underground buses).

For the purpose of this guide, I will be focusing on the Green Line, as it is what BU students take the most frequently. However, it does get a little bit more complicated, as the Green Light is composed of 4 branches, notated by their end destinations or letters: Boston College (B), Cleveland Circle (C), Riverside (D), and
Heath Street (E).

The B line is the most important line to get familiar with as a Boston University student, as there are 6 stops along our mile stretch of campus. If you are ever trying to get into Downtown Boston, 9 times out of 10 you are taking the B train from campus. The fare for the subway is $2.40 one way, and $1.70 for buses.

If you are interested in learning more about the logistics of the MBTA, I encourage you to check out MBTA User Guides on their website. 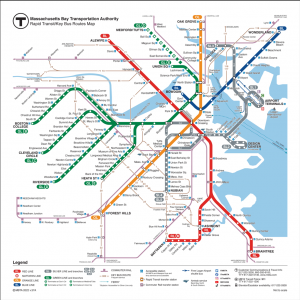 Now, onto my personal tips.
1. Get a CharlieCard One of the first things you should do when you start at Boston University is get a reusable CharlieCard, which you can load cash value or passes to pay for the T or busses. CharlieCards are available at fare vending machines in most subway stations, MBTA staff at most subway stations. They’re free other than the cash value you load on to them. It’s a lot more durable and convenient than a printable CharlieTicket. In a pinch, the T and busses accept cash as well.

2. My favorite apps for navigating the subway. Be sure to download an app that will help you navigate the subway. My favorites are ProximiT, Citymapper (which you can use in other cities), and also the Terrier Transit App
(which also has the BU bus schedule and estimated times). These apps allow you to enter your destination and get step by step directions. In addition, ProximiT uses GPS tracking to give an estimate of when the T or a bus will arrive at a station.

3. Keep in mind the hours of operation. Most bus and train service starts around 5 AM and ends around 1 AM. So if you’re planning on taking the T after a late night, remember to catch the last train before 1 AM or Uber back.

4. Kenmore is your best friend if you live in East Campus. I lived in Kilachand Hall my freshman year and absolutely loved being so close to Kenmore Station since 3 of the 4 green lines stop at Kenmore. If I was ever coming back from
Downtown Boston, I knew I could hope on any green line train (just not the E line!) and end up at Kenmore.

5. Get to know your vocabulary: inbound vs outbound
Inbound is always toward the 4 stations near Boston Common and outbound services travels away from those stations: Park Street, State Street, Government Center, Downtown Crossing.

7. Hang on tight! The T can be vicious sometimes with sudden starts and stops, so make sure to either take a seat, grab a hold of a pole or hand hold, and hang on tight. Sometimes when the T gets super crowded, it’s impossible to hang on. So, make sure to stand with a wide stance, with one foot slightly in front of the other to maintain your balance. Trust me, nothing is more embarrassing
than falling on the MBTA. 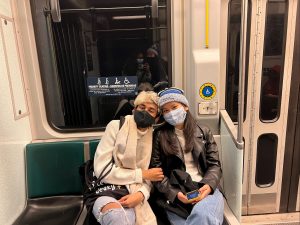 As a new semester is getting underway, it’s time to revisit the best study spots on BU campus. BU is well known as a big campus, which can seem intimidating, but with this list, you are sure to find new places to help you crank out that paper that’s especially hard to write or just do some last-minute readings.

In my opinion, the Starbucks located in Questrom is the best Starbucks on campus. The coffee is great, and there’s usually good music playing. The booths are particularly comfortable to sit and camp out in, and it’s even more fun when you’re studying there with friends.

The first floor of Mugar is also a great study area but is usually incredibly crowded. The third floor, however, is usually less crowded and is a just as good, if not better, study spot. The rows of desks give you a bit of privacy while also being able to talk to the person next to you if you are with friends. Studying within the bookshelves also, at least for me, makes me feel more studious and gets me in the mood to do work.

This might seem like a weird spot, but the comfortable couches are too hard to ignore. I also really like the atmosphere; most people are also doing work, and everyone is usually doing something different, so this is a great space if you are working alone on an assignment. 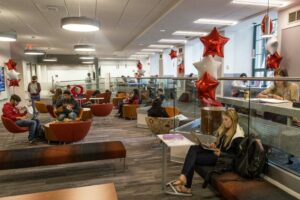 This is for all the people that need a quiet study space. The Think Tank is usually silent, and so this is a great place for people studying alone. There are a lot of outlets to charge any devices you have, and there are different seating arrangements (desks, chairs, couches) so that you can choose the spot that makes you the most comfortable. 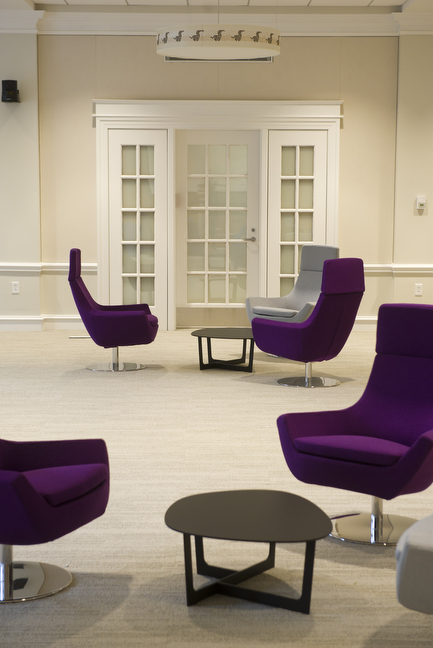 This is not a quiet space, so if you need to be in absolute silence to do work, this is not the place for you. However, it’s always nice to go downstairs (especially if you are living in Kilachand) and study while also getting into conversation with whoever else is in the common room at the time. The close proximity to the kitchen is also really nice for eating snacks while studying.

I hope this list has helped you find new places to study, or even just new places to hang out. Good luck to everyone this semester! 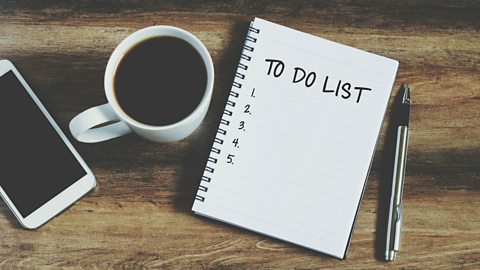 As I began this semester, which, as a junior, marked the halfway point through my college career, I decided to evaluate the past two years. I’m studying abroad in the spring and realized that, after I leave campus for Christmas break, I won’t return to BU until I’m a senior, at which point I hope to be well on my way to completing graduate school applications. “Time flies” is a cliché, but all clichés are rooted in some reality and I decided to do some early semester critical thinking to maximize this last semester on campus before all of the responsibilities and life changes of senior year hit. I think that critically evaluating oneself during periods of change is a positive way to ensure that that change is for the better. I regret not making lists such as the one that I’m about to outline before my past two semesters at BU; doing this as a form of journaling taught me what factors are the most important to my mental health, happiness, and academic or professional success. So, enough background: here’s a guide to writing some easy (and hopefully relaxing) self-analytical lists as a form of journaling!

A Short Guide to Self-Reflection:

Analyze those lists! Now that you hopefully have some bullet points about things that made you happy or unhappy and worked or didn’t work, make a new list from that material:

I hope that this little outline can help you think about your college experience so far (or maybe your high school experience if you’re a freshman!); I love writing but journaling can occasionally intimidate me, so I’ve found that listing things, for example moments I want to remember or that made me smile, is a great way to start reflecting about myself and write some things down without being overwhelming 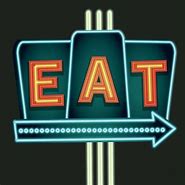 BU Dining is great. There are always lots of options, and the staff is incredibly helpful and friendly. Marciano Commons, one of the three dining halls on campus, is in fact right across the street from Kilachand Hall. However, sometimes you’re not in the mood for the dining hall, or if you have a kitchen, don’t have enough time to cook. I’ve got you covered. Here’s a list of my favorite spots to eat around BU:

Einstein’s is perfect for breakfast, lunch, or a quick snack. Conveniently located in the College of Arts and Sciences (where most of my classes happen to be), Einstein’s is the best. I always can grab a bagel, an iced coffee, and a table to do work or catch up with a friend in between classes.

I know, I know. A lot of people prefer Starbucks. But being from New England, Dunks will always be my favorite. The only one on campus is connected to Stuvi 1 on West Campus. An iced coffee with mocha swirl always makes my day better!

Basho is right in the middle of campus, so I like swinging by this place on my way home for lunch or dinner when I don’t have as much time to cook. The Katsu Chicken Bowl is my favorite. This bowl with crispy chicken and a ton of veggies and rice really hits the spot.

This is, in my opinion, the best place for boba on campus! It’s on west campus near Stuvi 2. I love ordering a classic milk tea with red beans and then camping out in the cozy chairs near the front window to get bigger assignments, like essays and presentations, all wrapped up.

I think as a BU student I’m required to mention Canes. And it’s true, it’s the best. Near Limered, Canes serves up the best chicken, fries, and garlic bread. Not to mention the Canes sauce - most people think it’s better than the Chick-fil-a sauce, but you’ll have to try it and let me know what you think.

This restaurant is a quick walk from Danielson Hall, on the east end of campus, and is perfect for cold Boston nights. This British establishment serves up the best pasties, my favorite being the traditional. It’s essentially meat, cheese, and veggies all baked into a pastry shell, and it’s the best after walking down the wind tunnel Bay State Road can turn into in January and February.

Finally, we have Coreanos. I’ll admit that this one isn’t so much on campus, it’s a little farther into the Allston neighborhood. However, it’s totally worth the walk, or a short ride down the T. Coreanos is a Korean and Mexican fusion restaurant. I always order their classic bowl, packed with chicken, rice, eggs, and the best sauce. It’s fun to go here on the weekends when I’m spending time with friends and unwinding from the week before.

I hope that these recommendations can help you out when you’re checking out Kilachand and BU. Feel free to reach out to any of us ambassadors to ask any questions! 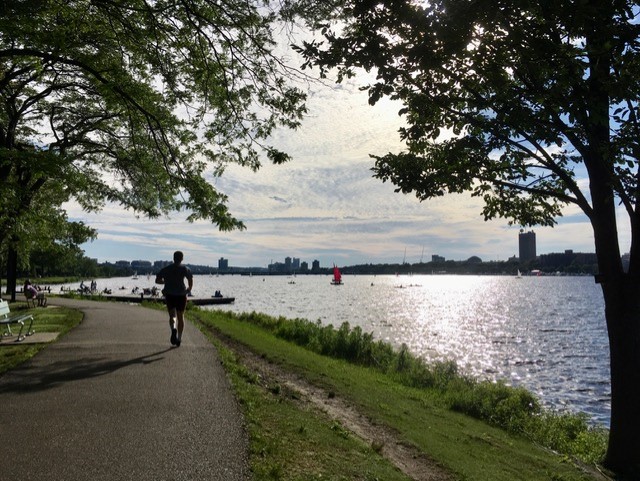 Our blog is on break for July, but we look forward to sharing more with you soon! 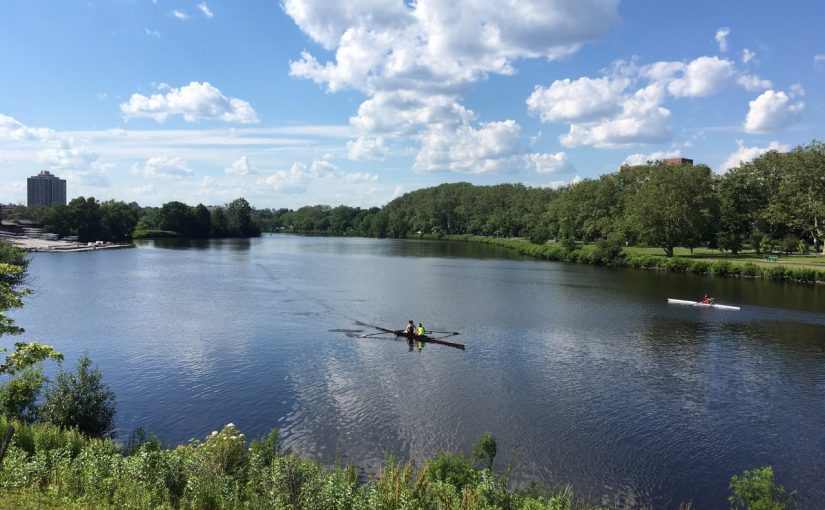 Our blog is currently on break for summer, but we look forward to sharing more with you in the fall!