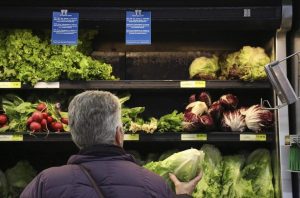 During the summer, romaine lettuce that was grown in Yuma, Ariz., was recalled as it was linked to a multistate outbreak of E.coli. (Well, there goes the lettuce on your hamburger.)

Then recently, another recall of this favorite leafy green, this time romaine grown at specific areas in California. (There goes that side Caesar salad you were going to have with your burger.)

This was followed by a recall about 12 million pounds of ground beef due to the potential of it being contaminated with salmonella. (Well, there goes the burger.)

The only thing you’re left with is the bun. (Which better be whole grain.)

We hear repeatedly that the United States has the safest food supply in the world. But with all these recalls, how can that possibly be true?

The answers is that it is indeed true, and all of these recalls prove it.

According to the Food and Drug Administration, the technology and the surveillance systems that are currently in place to respond to foodborne illness outbreaks are so sophisticated that they can detect potential outbreaks much more rapidly than we could decades ago. It is because of this increased sensitivity that we are experiencing more recalls. Undetected foodborne illnesses increase the risk of people eating unsafe food, getting sick, and even dying, so this rapid response protects consumers to a greater extent.

You can thank President Clinton for these surveillance systems: In 1997, the National Food Safety Initiative was established under his administration. The FSI coordinated the research, inspection, outbreak response, and educational activities that ensure that various government agencies work collaboratively and rapidly to safeguard our food supply and reduce the risk of foodborne illnesses. While the initiative has ended, the Food Safety and Inspection Service and its federal and state public health partners continue to have a surveillance system in place to protect the public from foodborne illness, according to the United States Department of Agriculture, which oversees the inspection service.

This is how it the system works: FoodNet is a surveillance network that works with state health department laboratories to monitor trends in foodborne illness in the United States. It is a collaborative project involving FSIS, the Centers for Disease Control and Prevention, and the Food and Drug Administration. PulseNet is a national laboratory network that uses DNA fingerprinting of bacteria obtained from federal and state health and agriculture  laboratories to identify similar strains of a foodborne pathogen in both a person and a food, suggesting a common source and potential connection between the two. If similar patterns emerge at the same time in different states, this could signal a potential outbreak, and these federal agencies all work together to pinpoint the source of the problem.

The system is set up to make sure government agencies are communicating. The swift, coordinated action of federal and state agencies helps curtail the outbreak and minimize the number of consumers who get sick. (Though sometimes the recalls cast their nets too far initially, in an abundance of caution that can hurt businesses that get caught up in them.)

The system works. Due to this technology and coordinated efforts, the number of infections from foodborne pathogens among Americans is 30 percent lower than it was in 1996.

So the next time you hear about a food recall, know that people are actively and constantly watching over the safety of the food you eat. Follow the advice of the recall and stay safe and healthy.

This article appeared in the Boston Globe.