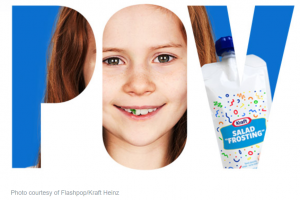 Timing is everything in life.  I am in Padova, Italy, with Boston University students and faculty as part an intensive 4-week, Mediterranean Diet: Food, Culture & Health course offered from the College of Health and Rehabilitation: Sargent College.  This immersion course, in northern Italy, takes a deep dive into the original science-based, Mediterranean Diet and lifestyle that was studied in the early 1960s.   At that time, the life expectancy of the Mediterranean folks living in southern Italy, Greece, and the island of Crete was among the longest in the world and the incidence of heart disease, certain cancers, and other diseases was among the lowest.  My goal here is to mimic the habits of both the adults and children, by eating tons of fruit and veggies along with seafood, pasta, and drinking liters of aqua (water) to stay hydrated.

All was healthy and happy in Italy until I opened my Twitter feed only to find that Kraft Foods launched a new product that is marketed to American parents and kids, called Salad Frosting.   I soon learned that Salad Frosting wasn’t pureed tossed green salad in a pouch that can be used to frost cupcakes in an attempt to enhance the nutritional value of this treat for kids.  Rather, Kraft decided to put their classic ranch salad dressing in a pouch and rebrand it as frosting to trick American children into consuming more salad.  Luckily, at this point in time, this is just a social media marketing stunt as the salad “frosting” isn’t available in your local supermarket…yet.

My initial response to this media campaign is why do we have to covertly coerce American kids into eating Mother Nature’s finest when Italian children, which I have observed in outdoor cafes here, are eating caprese salad or tossed salads with radicchio, tuna, eggs, carrots, and olives on a regular basis?

Concerned that my eyes were deceiving me, I reached out to Gisele Flores, a dietitian who oversees the nutrition quality of lunches at 50 schools in Verona, Italy, to see if Italian children are truly eating salads.  “A fresh green salad with seasonal vegetables such as fennel, tomatoes, and carrots is served at least 3 times a week at school lunch.  The children douse it with vinegar and local olive oil before they gobble it up,” claims Flores. Because research supports that a diet high in fruits and veggies can help fight obesity, it’s no coincidence that childhood obesity in Italy is less than half of that found with American children.

So why do Italian kiddies eat salad but their American counterparts have to be tricked into eating Mother Nature’s Bounty?  Research supports that children will follow the food preferences of their culture and peer group, most importantly, their parents.  Monkey see, Monkey Do, Monkey eat.  If the parents eat salad, the kiddos will follow.

Eating salad is not unique to Italian children.   Researchers from the University of California and Univesite Sorbonne Nouvelle in Paris compared the dinner quality of French and Americans families as childhood obesity is also lower in France than in the United States.  Not surprisingly, they found that French children ate more veggies than the American kids, and that the French children ate dinner in multiple courses with veggies often being first before the main course.  Translation: They ate the veggie or salad course first before the entrée.  In comparison, the American kids were served family-style, with the serving bowls or platters of meat, starchy carbohydrates such as pasta or rice, and vegetables placed on the table all at once.  This family-style dining creates a free-for-all, with kids picking what and how much they want, or don’t want, to heap on their plates.   Not surprisingly, produce wasn’t the main attraction on the dinner plate of the American kids.  The researchers concluded that habitually serving vegetables at the beginning of the meal, when folks are so hungry that they will eat anything that isn’t moving, will help the entire family develop healthy habits starting when the kids are in diapers and remaining on the menu through adulthood.  With over 70% of American adults overweight, we may want to take a tip from the European families and start eating salads before the main meal to improve both our diet and health and shrink our waists.

In my opinion, we don’t need to disguise salad dressing as frosting in order to get kids to eat salad or vegetables.  We just need to introduce produce early and often at all meals.  Because the most influential peer group among children is their parents, there is a wonderful opportunity here for adults to be healthy role models for their children.

If you don’t believe me, come to Italy (or Paris, for that matter) and see all the locales enjoying their wonderful food.