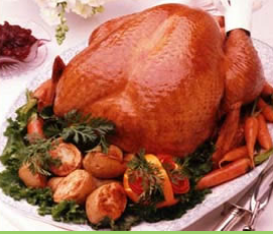 It started in mid-October with candy corn and won’t let up until the last tortilla chip gets thrown in the trash on New Year’s Day. It’s a waist watcher’s worst nightmare – eight weeks of eating as though you’re on a cruise with the U.S.S. Pig Out. This is the last (and hardest) stage of the voyage. Having gotten past Halloween, you’ve still got another few weeks before you can dock into the New Year safely.

Here are some survival tips for holiday parties:

Talk about portion distortion. According to research the surface area of a typical dinner plate has increased by 36% since 1960. The bigger the plate, the more food you are likely to heap on and eat.

Tip: Use Grandma’s dinner plates at your supper and smaller plates when you entertain this holiday season. Using a smaller plate can dramatically reduce the calories consumed at that meal. Piling mostly veggies on smaller plates can further reduce calories at your meals yet “fill you up without filling you out”.

Let’s get realistic about this. How many parties do you expect to attend in the next few weeks, including New Year’s Eve? Two or three a week? Do you realize that if you drink two glasses of wine at each of those parties, by the end of the season, you’ll have drunk more than half a pound of extra weight? The worst part about holiday party wine is that, usually, it’s not even the good stuff.

Tip: Play the Good Samaritan and assign yourself the Designated Driver. Then you have a compelling reason not to drink. If you really want a glass of wine, keep an expensive bottle at home and enjoy a glass at home when you return from the party.

3. Cut back on the hors d’oeuvres

Did you know that one ounce of brie cheese melted on a hunk of crispy French bread packs over 100 calories and 9 grams of fat? Couple that with a few other nibbles and you’ll have to beep your tailor before dinner is served. Making a meal of hors d’oeuvres is fine once in a while, but you’ll need to get a handle on this part of the holiday party routine during this busy season.

Tip: Score points with the host or hostess by offering to bring hors d’oeuvres of your own. Now, here’s the sneaky part. Bring something that you know you can eat and fill up on – without filling out. Take a festive basket, line it with a holiday cloth napkin, and fill it with fresh veggies. No time to slice and dice? Buy the pre-cut variety at your local supermarket. Put a small bowl of a low fat dressing in the center of the basket. Snack away.

4. Stuff yourself before you go

If the dinner party invitation says cocktails start at 7 pm, this probably means that dinner won’t be served until Dave Letterman is delivering his monologue. As the evening wears on, even the wallpaper will start to look tasty. In this ravenous state you are likely to stuff yourself with too many hors d’oeuvres at dinner.

Tip: Nibble on something healthy before you leave the house – a large salad or a bowl of hearty vegetable soup. This tactic will curb the temptation to eat the mountain of cheese and crackers that are typically at holiday parties.

Cooks always bring out their best recipes for the holidays. The only problem is that they expect you to eat all that food. Unfortunately, cleaning your plate is a signal to the hostess that you enjoyed the meal.

Tip: Ask him or her for the recipe. Imitation in the sincerest form of flattery. Your host will be thrilled that you enjoyed the meal so much that you want to share it with others.

6. Be part of the solution

Be sure to practice what you preach at your own party. Limit the number of hors d’oeuvres you serve and keep them as healthful as possible. Choose fresh veggies and sliced fruit instead of cheese and crackers. Serve dinner early and choose a lean entree such as grilled seafood.

Tip: When it comes to dessert, go light and go for a contained amount. When you make a dessert, make one that can only be served in individual portions. If you’re having a party for eight, make sure you only have eight individual desserts. Then there’s no leftover cheesecake to wake up to.