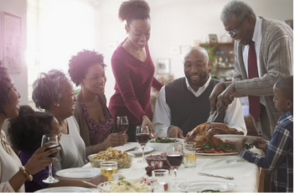 Why do we do it to ourselves every year?  We approach Thanksgiving as though it was the “Last Supper” and wake up the next day with a pumpkin pie hanger.  Each year, we stuff ourselves silly on the last Thursday in November because we know that we will have to wait another 12 months before we can indulge in the whole turkey feast again.

Let’s keep this in perspective.  If you want a turkey with stuffing and apple pie à la mode in July, these ingredients are yours for the asking in any supermarket all year round.  In fact, if we all got in the habit of repeating this Thanksgiving meal a couple of times a year, it would lessen this impulse to furiously gobble it up to an excess on this one day.

Here are my 5 hacks that can help you break with the tradition of over doing it on Thanksgiving but still allow you to deliciously enjoy the day:

Hack No. 1: Carve out an earlier time to eat. 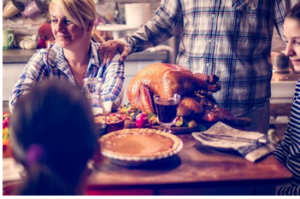 The time of day that you eat your dinner may have an impact on how your body stores the excess calories from your feast.  Emerging research is suggesting that eating a higher percentage of your daily calories closer to the time you go to sleep may increase your body fat.  It appears your metabolism is at play here. Your metabolism is impacted by the body’s circadian rhythms, which are the biological process that the body follows over a 24-hour cycle.  The time of day that we eat can have an impact on your metabolism and the way the body stores fat.

Hack No. 2: Downsize the menu. 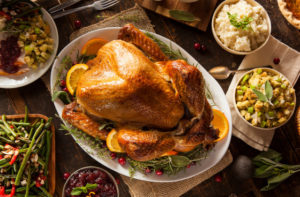 Make an executive planning decision to serve less, especially those side dishes.  Research suggests that increasing the number of food options available at a meal, increases the amount of food and calories you’ll likely consume. It is not mandatory to have both mashed and sweet potatoes, nor do you have to serve nor do you have to serve both whole cranberry sauce and the gelatinous kind that fans out on dish like a turkey’s feathers.

Keep this in mind when you also plan the dessert menu.  How many varieties of pies do you really need to cover the table for it to be Thanksgiving?  If there are five different pies available, you will be more likely to eat a slice of most, if not all, of them rather than just being satisfied with one slice of a single dessert.  Decrease the number of desserts you traditionally serve by 50 percent, and you could possibly cut your dessert calories in half.

Hack No. 3: Set the table with grandma’s china. 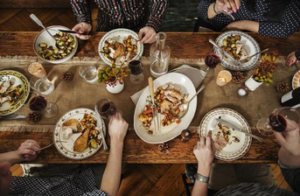 According to research, the average size of a dinner plate has increased by over 20 percent over the decades.  This year, pay homage to grandma and serve your Thanksgiving dinner using her petite china.  (It is likely stored in a family member’s attic so start the hunt early.)  The smaller the plate, the less food you are likely to heap on and eat.   Grandma will be grinning ear to ear at the dinner table.

Hack No. 4: Take the food out of the limelight 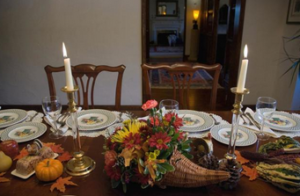 Research also suggests that staring at platters of food, especially enticingly yummy favorites, can motivate you to unconsciously eat more even if you are not hungry.  This is what happens when the meal is in the limelight in the middle of the dinner table teasing you to consume more and more.

Rather, serve dinner buffet style and fill the dinner table with flowers and candles instead of platters of food.  My festive favorite is to carve out the center of a medium pumpkin and a few mini pumpkins and fill them with fresh flowers or candles.  Feast your eyes on these seasonal beauties rather than the food during dinner.

Having the food at a separate table will also force you to get up and move to get seconds. 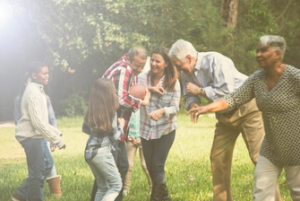 Instead of watching football on the couch all afternoon, why don’t you gather up the crew for a family scrimmage in the backyard or take a long group walk?  If you implement Hack No. 1, you will have all afternoon to walk off the mound of stuffing you ate earlier in the day. A one-hour trek through the neighborhood could burn off over 200 calories (about the number of calories in that sliver of pumpkin pie you had).